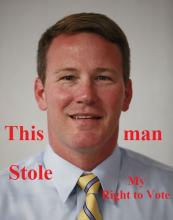 I will not be allowed to vote in this election. My registration has been stricken from the rolls. I can prove it. I know how it was done, who did it and I have a paper trail. I'm not alone. I can prove, with paper trail, that at least one other person was illegally stricken from the Ohio voter rolls. In all, 1.2 million people were purged in Ohio. An unknown but large number of them, like the two us us were purged illegally. Donald Trump is claiming that the election is rigged, though I doubt he has the intellectual capacity to understand how.