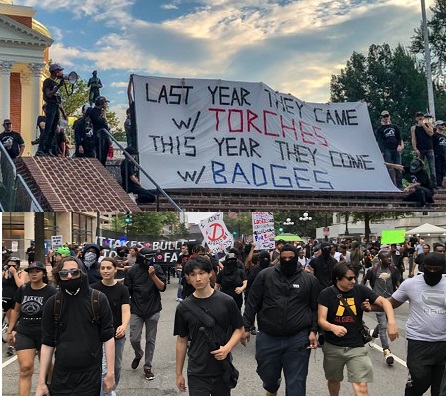 The weekend of August 11th-12th was billed as a second round for the so-called Alt-Right movement. It was to be a reprise of their tiki-torch adorned murderous rampage in Charlottesville with an added taking back of DC after the ever memed Richard Spencer face punch. Like many sequels, the script was cut to bits in the editing room and the actors could not be motivated out of their trailers. The lackluster mobilization was met with large angry response in both cities. Meanwhile the police and political leadership of both cities did their best to help the fascists who were barely present to receive the help.

On the night of August 11th, all eyes were fixed on Charlottesville and the it's historic UVA campus. A year after the incident that saw hundreds of fascists attack a handful of students with mace, torches and fists while antifascists fought to hold a small perimeter while police looked on the mobilization was huge. Hundreds of Anti-fascists, mostly but not entirely local, held a vigil in the face of massed UVA riot cops sent to corral and control them. This was followed by a very loud and very angry march off the campus and through the streets of Charlottesville. The police made several lackluster attempts to attack the march for reasons that were unannounced but were repulsed. Attempts to arrest random marchers were made but the marchers defended their own and after brief skirmishes the attempted arrests uniformly failed. In at least one instance, caught on the video shown above, the cops were repulsed and then berated with chants of “#ACAB All Cops are Bastards”

The next day in Charlottesville over one thousand people marched through the streets to the spot where Heather Heyer was killed exactly one year before. One group from out of town, the Great Lakes Anti-fascists, ran to the front of the march and attempted to lead the marchers into a place where they could be kettled and arrested by the over 300 riot cops immediately on hand. An even larger police mobilization was waiting out of sight. Local organizers and people from out of town who were familiar their history of cooperation with police invited them to leave which they did after giving a bunch of media interviews and posing for selfies.

When the march, accompanied by hundreds of angry cops arrived at the corner of Water and 4th street, where one person was killed and seventeen wounded by a single Nazi driving his car into the crowd a year before, there were more police and two armored cars. A third Bearcat armored car waited two blocks away with more police as the cops attempted to attack the crowd. They were again repulsed after arresting three people, choosing to not doubled their bet on bad optics.

The fascists themselves were not present with the exception of a single Jason Kessler ally who attempted to seize the microphone at the memorial for Heather Heyer. He left after the police disappointed him by not helping him directly disrupt the event. It was clear the police were really hoping for more fascists to support. Local media lead up to the event put a stronger emphasis on the blue lives they thought mattered after they were lost in a helicopter crash after last years events than on the fascists that were the cause of the mobilization in the first place.

Meanwhile in Washington DC more people showed up for the counter protest against the other fascist mobilization than attended Donald Trump's inauguration in January of 2017. Considering that half of the latter were seeking a position somewhere in the new kleptocracy this is not a high bar to vault. The most precise count of the fascists came in at 34 knuckle draggers in total. Fascists would later claim they feared to show at either event for fear of being identified and subjected to campaigns of exposure on social media that could cost them their jobs. Several fascists identified as having military or military contractor jobs, which makes their participation in these events illegal, have had their snouts pushed away from the government trough in favor of pigs that roll in cleaner puddles.

The local DC government bent over backwards to help the 34 that did show. There had been a move to make private DC metro train cars available to them for their safety. This generous offer of public infrastructure was rescinded after opposition from the local transit union that came with the implicit threat of a strike. The police were still aggressive in their attempts to protect the fascists and get them in and out of their little party despite the crowd size.

Although the arc of major fascist mobilizations appears to be temporarily peaking, another major event is planned for Austin Texas on the 18th of August. Large events seem to be giving way to a two pronged fascist strategy of direct attacks on smaller meetings and defense of the ongoing ethnic cleansing being carried out by ICE. In both cases, local police forces seem to be more than happy to assist in the violence with or without the fascists even being physically present. As always, the Mockingbird will continue to cover these events.