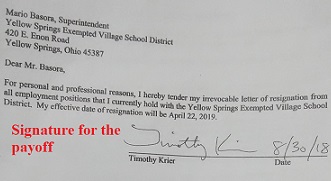 An anonymous tip came early yesterday morning. They concealed their identity. A special quick school board meeting was to be held at 7pm. I checked. It had been legally announced, barely. The law requires that all public bodies must publish the time, place and agenda of any meeting for it to be a legal meeting. The Yellow Springs School Board does not regularly meet on the first Thursday of a month. If it requires a special meeting, those usually happen on the 4th Thursday. What the board did was publish their September 6th meeting on August 31st, right before the Labor Day weekend in the hopes nobody would notice. It was entirely made up of two executive sessions which nobody can see with a brief public interlude. The chairs were stacked as they anticipated no members of the public would be there except Meghan Bachman, the new editor of the Yellow Springs News. She had obviously be briefed beforehand and told what to write and what not to write.

The two secret executive items were the resignation of Tim Krier and the ongoing lawsuit against Angela Bussey, a former teacher who has previously sued the district and Krier for bullying. Board President Aida Mehermic was outside of the room for the first session and but entered the room for the second. She had previously not disclosed to Bussey that she was board president while acting as Bussey's mental health counselor and treating Bussey for the bullying she would later back up by firing her. Since this relationship has come to light she has made a public point of recusing herself from meetings concerning the issue but it is obvious that real decisions are made over glasses of white (z)infidel in the kitchen.

The first session, which was concerned with the Bussey case, lasted much longer in than the second. This shows that the second was quick and done. Megan Bachman than asked Superintendent Mario Basora a for a “copy of the settlement.” No settlement has been offered in Bussey's case, which is still in mediation with it's third and final day long session with long two attorneys costing the district $300 per hour each or nearly $5000 being scheduled for September 19th. Bachman can not be referring to a mediation offer as civil mediation in such cases is confidential, unless Basora is breaking the law and Bachman is a party to it. One wonders if they will offer Bussey half of her home back since their suit is designed to take it all.

Although he has been witnessed looking for attorneys by the Mockingbird's sources, and mostly confining his search to highly advertised personal injury firms, there is no record Tim Krier actually filing a suit. Without a suit, there can be no settlement. So what is at issue here is a possible threat to sue and deal made without the actual filing of the suit, unless Basora and Bachman violated the confidentiality of mediation.

Tim Krier will not have to work until April of 2019 in order to receive his full salary and benefits. A copy of the signed contract is available to download at the end of this article. He will make 108,000 plus full benefits on his 10 month leave of absence costing $30 for every soul in Yellow Springs. The cost of his family medical care, which includes the School District paying to hide his son, Noah Krier, in mental health care facilities from the consequences of the multiple sexual assaults on high school students he is accused of, can not be calculated from the document but is certain to be expensive. Bachman did not mention this in the article she had completed before 5 am today.

The board has also agreed to write Tim Krier a glowing recommendation that will help him get a job in another district where he can bully more women teachers. He offered his house for sale as soon as he went on leave and has since moved and sold it. Thus the school system has had ample time to hire his replacement and continue to pay him to not work. Tim Krier has profited handsomely from his son's crimes.

At the end of the executive session, Basora walked Bachman to their cars while the rest of the board sequestered themselves in the closed session, hiding until they were sure every car had left and then slipping out the back of Mills Lawn. Somebody had obviously called because counter surveillance by a small silver car orbiting the school was also taking place.

The whole exercise is a lesson on Yellow Springs government in minutia. A clique of people have a meeting to plan the punishment of whistleblowers and reward their friends. The purpose of this secret meeting is to rubber stamp decisions made in other more secret meetings. Children are raped and the rapists are paid off while the families received no protection even when the rapist is the Principal's Son. Rather than demanding transparency and decency in local government, the local press walks nearly hand in hand to the parking lot discussing what will and will not be said about it.