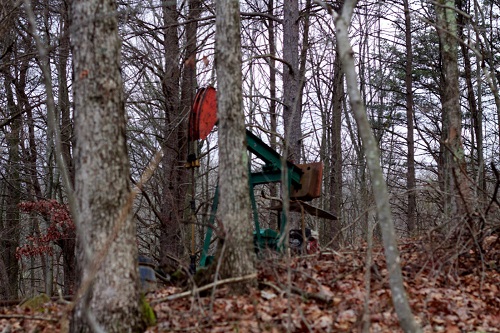 A new coalition of environmental groups and community organizations from fontline areas affected by fracking will be holding a weekend of demonstrations on September 8th in Cleveland, Columbus and Marrietta. The groups, including three chapters of Keep Wayne Wild, Athens County Fracking Action Network, the Sierra Club, Ohio Revolution, and the Cleveland Environmental Action Network will be protesting a new round of leases for oil and gas drilling inside the Wayne National Forest as well as the Rover Pipeline and PNC bank which is part of a junta of banks that provide a revolving credit fund to Energy Transfer Partners.

Energy Transfer Partners, already responsible for some of the worst human rights violations in recent memory at protests against their Dakota Access Pipeline, is currently driving a 357 mile pipeline across Ohio to bring the fossil fuel to their shipping and transfer facilities for export.

PNC bank provides financing along with a number of other American and foreign banks at near or below market rate to ensure maximum profitability to Energy Transfer Partners.

[Editors note: This Author personally, as well as Mockingbird Publishing as a corporate entity, maintain accounts with PNC Bank. Between receipt of the press release for this story and lunch essentially looted one of our accounts with semi-legal charge offs. Our editorial position has moved to endorsing the boycotts and divestment from PNC bank that has been called for by activist groups based on their human rights record and dishonest business practices. All business with PNC bank will cease within 21 days. ]

The protests will be held at the PNC Bank Tower in Cleveland, the Federal Building here in Columbus and the Athens Ranger Station - Marietta Unit at 12pm, 3pm and 12pm respectively. The Coalition is has set it's sights on Eclipse Resources which won 1,300 acres of public auctions of Bureau of Land Management land in the first two round of auctions and applied for it's first fracking permit one week ago on August 17th.

Some of the first leases to be offered are directly adjacent to the Ohio River and are upstream from the water treatment facilities of such small towns as Cincinnati and Louisville.

A spokesperson for Keep Wayne Wild, Becca Pollard, said “Wayne National Forest provides habitat for wildlife, including a number of endangered species and recreational opportunities for people of all ages. It is one of the wildest and most scenic areas in Ohio. Furthermore, it cleans our air and water and helps mitigate climate change.”

The groups plan have urged Senator Sherrod Brown to sign onto a letter for a broad investigation into Rover Parent Company, Energy Transfer Partners. Sherrod Brown's office declined to comment on the issue for this article.

When called for clarification on Brown's position, Pollard explained that Brown's aides had stated that the Senator would take no position on the issue until more written appeals had been made to his office. The Sierra Club has collected hundreds of letters and is due to deliver them within the week. Pollard and her cohorts remain determined “ We must act now to protect what little forest we have left in this area, for our own good and for the sake of future generations”