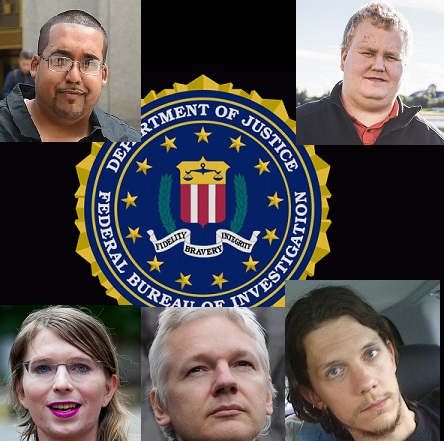 Sigurdur Ingi Thordarson has been many things to many people. He is a youngish international man of mystery. The mysteries that surround him are do in no small part to the fact that he would diagnosed as a psychopath if he were not a chubby little coward. Instead he has been twice deemed incapable of telling the truth and has had a diagnosis as a sociopath presented to Icelandic Courts. This has happened at both his convictions for sex crimes against children. Between these two convictions he managed to be convicted in other cases of fraud, embezzlement, and blackmail. Yet he is still the FBI's star witness against Julian Assange in the UK.

Julian Assange faces 175 years in prison for espionage if actually tried in the United States. He has been imprisoned in the UK face extradition to the US and prior to that Sweden. Prior to his imprisonment, he was trapped in the Ecuadorian Embassy in London since 2011 where he had sought political asylum. After a change in government, Ecuador gave him up. The Swedish case against him collapsed twice before the United States finally sought his rendition directly.

The espionage charges stem from the release of US State Department Cables as well as video documenting US war crimes in Iraq by Wikileaks, which Assange founded and lead. The case obviously has serious implications for press freedom in the US, so much so that even the CIA purchased and Jeff Bezos controlled Washington Post has said as much. The case hinges on the question of solicitation. Did Assange direct the theft of these documents or did Wikileaks received them unasked after the fact? At best, Thordarson has claimed that there is was an implied rather than direct request. Thordarson, in addition to being a known liar and con artist, has also been revealed as a paid FBI informant during the time he worked at Wikileaks prior to his numerous convictions, including for embezzlement from Wikileaks on the side while he was also informing on the organization.

Thordarson in short is the least credible witness the FBI has put forward since the trial of Leonard Pelitier in 1977. In a statement delivered to the UK court, he has admitted that Julian Assange's crimes were actually his crimes. These statements are damning enough, but he also spoke with the Icelandic media outlet Stundin which released a story on his various capers on June 26th. There he made a stunning number of admissions that have implications far beyond even Assange's extradition saga.

During his time at Wikileaks, he also was in contact with hacker turned FBI informant Hector Xavier Monsegur. Sabu was key to the case against the Lulzsec hacker group that included Jeremy Hammond. He was also key to the case against Chelsea Manning. While working for the FBI, Sabu directed members of Lulzsec to carry out hacking attacks on various non-American government targets, including Turkey and Iceland. American intelligence reaped the benefits while Jeremy Hammond took the fall.

Connecting these dots gives a very different set of pictures than the ones contained in the official American and British government stories. What was actually happening was that two FBI informants, niether knowing at the time that the other was also an informant, directing hacking attacks in the interest of the public's right to know about the criminal misdeeds of the very governments directing the attacks. These attacks were then used to create the illusion of a several criminal conspiracies that resulted in the imprisonment of Jeremy Hammond, the repeated imprisonment and torture of Chelsea Manning and the now decade-long continued imprisonment without trial of Julian Assange.

It has now been revealed that Thordarson's claims about Assange's involvement are false. It is also clear that the FBI either knew they were false or directly concocted them. While they were grooming Thordarson as an informant, the eight person FBI team was also directly lying to Icelandic Police officials and even to the small nation's interior Minister, Ögmundur Jónasson about the nature and targets of their investigation. When the lie was discovered, they were expelled from the country.

They continued their work with Thordarson in other countries, flying him there, paying for his stay, and providing him with cash payments straight from the pockets of American taxpayers. All the while, Thordarson was stealing from Wikileaks, defrauding other people in business and grooming children for sex with promises of cars and other goods gained from his crimes and FBI expense accounts. The FBI, in their efforts to entrap Assange, were financing the luxurious globe trotting lifestyle of a serial pedophile. All this was done in order to obtain testimony that was false on defendants who, with the exception of Assange, had already been ensnared by another informant and were later convicted.

Along with the personal violations of children, the violations of national sovereignty of Iceland did not end with Assange. During the time that Thordarson was employed by the FBI while embezzling funds from Wikileaks, a computer was found in the closed section of the Althinghaus, where the Icelandic Parliament meets. This computer was found to be spying on the network and phone communications of members of Parliament. Thordarson later leaked information gotten from this computer to the press.

The computer had been placed next to the office of Birgitta Jonsdottir, a member of Parliament and Wikileaks supporter. Jonsdottir has also been targed by the United State Department of Justice for her association with Wikileaks. This targeting required the European Parliament to affirm her parliamentary immunity. The use of planted hardware, as opposed to targeted software, is a low skill tactic in line with the abilities of Thodarson as opposed to the abilities of Assange or other Wikileaks staff. It was likely done on spec by Thordarson in order to have more information of value to the FBI. Nonetheless, whether Thordarson did this of his own violition or at the request of the FBI, an American domestic law enforcement agency spied on the highest levels of a foreign government in order to build a case against a journalist with help from a convicted fraud artist and pedophile.

The usefulness of Thordarson to his FBI handlers lanquished for years as Assange was immobilized and effectively neutralized. That changed in 2019 when the Trump Justice Department began pushing for his extradition to the US. Now Thordarson has resurfaced, along with his admitted lies, both in the Icelandic media and British court system.

How much additional mileage the FBI intends to squeeze out of their broken vehicle of snitchery, fraud and pedophilia remain to be seen.