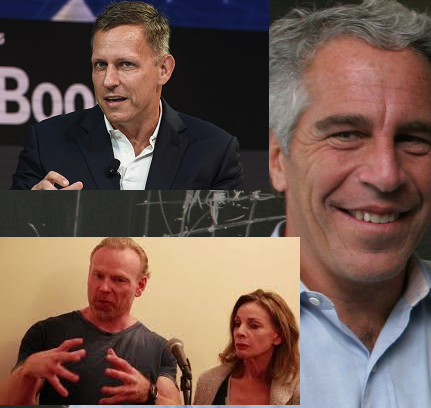 Immortal pedophile cult is a phrase that will get your undivided attention. Jeffery Epstein and his now well documented crimes have a headlock on the popular imagination. Speculations about Bill Clinton and (sworn in court) accusations against Donald Trump in conjunction are in the subject of speculation. What is documented but under discussed is that Epstein was part of a pedophile friendly immortality cult. This cult is what Paul Simon once called “A loose affiliation of millionaires and billionaires and baby... these are the days of miracle and wonder,” Epstein and his associates spread their loot around this network liberally, spending on many projects, some of which will be documented here and some will be the subject of future articles.

Working outward from the moment of Epstein’s alleged suicide reveals a web of money changing hands. It is known that Epstein was a client of the Alcor Life Extension Foundation, which will agree to freeze a dead or dying person's head or body in liquid nitrogen for later revival or when a cure for what kills them is found. It is unknown Alcor managed to preserve Epstein’s body as a whole or in parts as the Fire Department of New York City has been illegally non-compliant with The Mockingbird's public records requests under New York State's F.O.I.L. laws. The Mockingbird does not currently have money to sue The City of New York in the New York State Courts, although we would prevail.

Alcor, on top of being a strange idea with a science team and a large bank account, is controlled by a pedophilia advocate and has some of the least egalitarian connections an organization can have. Alcor's CEO Max More was wrote an essay for a British libertarian magazine titled Sex, Coercion, and The Age of Consent in which he said “It is difficult to comprehend how merely becoming friendly with a child, and then encouraging him or her to indulge in sexual activities, can be a violation of rights." More penned the track on his given name of Max O'Connor and has defended it in print as recently as 2011 under his new name.

More's wife, Natasha Vita-More, sits on two key advisory boards in the life extension ecosystem. The first of course is Alcor and the second is a transhumanist advocacy group called Humanity Plus. Humanity Plus has a Vice Chairman named Ben Goertzel, who is a noted artificial intelligence researcher and is also the founder of a research and advocacy group called the Singularity Institute. Jeff Epstein has donated to Humanity Plus and directly financed Ben Goertzel's research with a $100,000 grant. Goertzel, along with his father, retired sociology professor Ted Goertzel, are also Alcor clients, with Ben on the whole body plan and Ted on the head only plan.

The web of connections grows tighter when one zooms in. Goertzel the younger was a featured speaker at the Breakthrough Philanthropy Conference held at the Santa Fe Insitute. This conference is where hand picked attendees have the privilege of having their donations “charities” matched by billionaire Peter Thiel. Thiel selects the charities and the both the Singularity Institute and Humanity Plus were amongst them. Epstein donated to the Santa Fe Institute and Christine Maxwell, sister of his girlfriend and pimp Ghislaine Maxwell is on the board.

As reported by the Mockingbird previously, Christine Maxwell's company Chiliad provides big data services for the FBI's counter-terrorism database. So does Peter Thiel's flagship company Palantir. Although Thiel made his fortune at paypal, Palantir received money to start from In-Q-Tel, the CIA's tech investment arm.

Peter Thiel is also a client of Alcor and a donor to both the Singularity Institute and Humanity Plus. Thus there are two billionaires investing in the same life extension technologies with a third, Christine Maxwell, holding a board seat financed in part by one of them and sharing a government client with another.

Although Epstein was a convicted pedophile and raped many children with Maxwell's sister, there are no proven accusations of sex with teenagers against Thiel. He merely drinks their blood. Another so-called life extension technology that Thiel is reported to be involved with is transfusions of blood from teenagers. He has variously been reported as “being interested” in the technology, “not involved” with a Silicon Valley start up that markets the product for $40,000 a month and not commenting on it after it was reported by Gawker that he was. What is clear is that he is desperate to cheat death.

A social network map is provided below as a sort of cheat sheet for this and other forthcoming articles on this nexus of pedophile vampire billionaires who build software for the intelligence community and want to live forever. What disturbs this author is having to type those words and not having it be fiction. 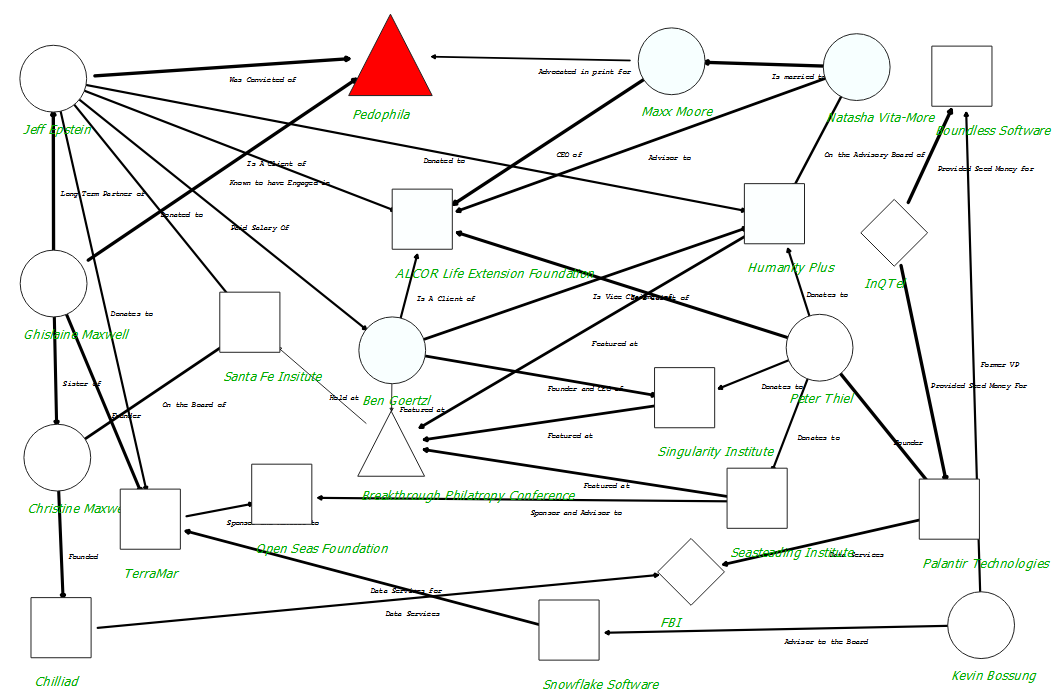