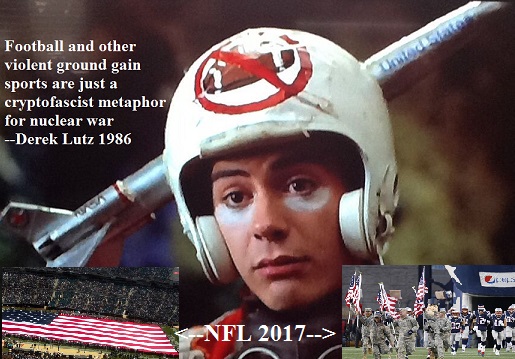 Derek Lutz, played by MCU icon Robert Downey Jr in the 1986 comedy Back to School, said it plainly in the Reagan drunk heyday of the late cold war “Football and other violent ground game sports are just a cryptofascist metaphor for nuclear war.” The public would like it to be just a pastime, just a game, just a sport. It is not and can not be just a game. Aside from the huge public subsidy the NFL receives by using the entire education system of the nation as a training ground and farm league, it also receives direct payments from the military for flyovers during games, and troops on the field. Direct recruitment advertising fills the airwaves during commercial breaks. Now the players are not permitted to protest police murder during the national anthem.

America's national anthem is a celebration of slavery. The second verse of the Star Spangled Banner as a poem reads in part:

“No refuge could save the hireling and slave

From the terror of flight or the gloom of the grave,

America's national anthem contains a literal threat of death to those who would no longer be slaves. As America edges further toward war abroad and deepens oppression at home, we need to remind the athletes who might not have been able to afford college without football that they should know their place and not speak up. The prohibition against kneeling during the national anthem comes within a week of the House passing legislation that makes it a federal hate crime (on top of already being a regular crime) to assault a police officer.

You can not protest police brutality and murder any more, on or off the football field. Police have been known to beat protestors and then charge them with assault. This now carries an additional federal charge, a second trial, and another possible 10 years in prison. At the same time, simply failing to stand straight up while an anthem to slavery is played and fighter jets race overhead is now punishable by a fine.

When I lived in Berkeley California in the early 1990s, there was a guy there who made a small living selling ironic bumper stickers, one of which read “Who died and made you Darth Vader?” In this case, it seems Lucy Parsons died, and Mike Pence is now evil robot Anankin. The Vice President is overjoyed with this new, unanimous move by the NFL owners. Like his boss Trump, he likes to tweet. His tweet on this? “Winning”

Winning implies that there is a struggle and if Mike Pence feels like he is winning, he is winning against black men who do not wish to celebrate slavery and object to black people being shot by policemen. The latter happens nearly single day in America and has happened at an ever increasing rate since the Black Lives Matter movement began.

Mike Pence, and therefore the American state, is at war with black people. Otherwise there is nothing to be winning. So please, be patriotic, wave the cops, salute the flag, stand for the slavery anthem and watch the jets fly overhead on their way to bomb another school somewhere in Asia or Africa (I tend to loose track of whose schools and hospitals we are supposed to be bombing to freedom this week, so many bombs, so many children, so little hard drive space for the casualty spreadsheets).

Somehow, centrist liberalism has moved the discussion to players being “allowed” to wait in the locker room during the slavery anthem. That means protest silently and out of sight. The owner of the Jets has said he will pay any player who kneels fines for them and eat the fines for his team. That means you can protest only with your boss's permission. Because he owns you, so he can give you permission to not stand for the slavery anthem.

As this is all happening, fascists, and by fascist I mean literal swastika wearing people who are proud to be called Nazis, march in the streets of this country. Police brutally attack demonstrators to defend the rights of these actual Nazis to free speech. If you protest the police, go to federal prison. If you don’t stand for the football slavery song, have a fine. America is great again and Mike Pence is winning.

There are already calls to boycott the NFL. I can not join those calls. I do not have a TV. I did not care about the sport beforehand. Perhaps when Spectrum calls next time, which they do three times a week to sell me streaming sports, I'll agree to buy cable if they drop ESPN and SyFy renews The Expanse (you know The Expanse right? It's the Science Fiction show with the majority of female roles being played by strong women of color. Yeah... that show). Otherwise, you can take your cryptofascist metaphors, your celebration of slavery, and your denial of basic free speech rights and fuck right the fuck off. Thank you.

Perhaps I long for a simpler time, when Robert Downey Jr. had blue hair and talked about fascism being bad. When Reagan was the drooling moron in the White House and the Democratic Party was just inventing super-delegates to keep progressives from running for office. We have fallen so far backwards that Joe McCarthy has sprung resurrected from the Ouija board and danced up and down both sides of the Congressional aisle then trotted home to watch the game on a Sunday afternoon.