They never saw a Palestinian child they did not want dead. Bi-Partisan American Consensus on who to murder If you are a part of the political class in America, nothing turns you on like a dead brown baby. The Democratic Party pushed forward a congressional leader to justify what Republicans high fived on the street. The bare facts of last week's massacres, plural, in Palestine is that they are part of an ongoing program of genocide that has broad bipartisan support. The death toll, when examined proves this. Since the Republicans spoke first, their choicest statement will be addressed first. It provides a lead in to the facts of the death toll. These facts further expose Congressional Democrats for the genocide apologists that they are.

Due to the emotional content of this story there was a delay in writing it. A good deal of time was spent with the pictures of the deceased. Rather than post shocking photos to elicit horror, what is reprinted here is as many photos of the martyr's faces as possible. These are the faces of people who died for their country. 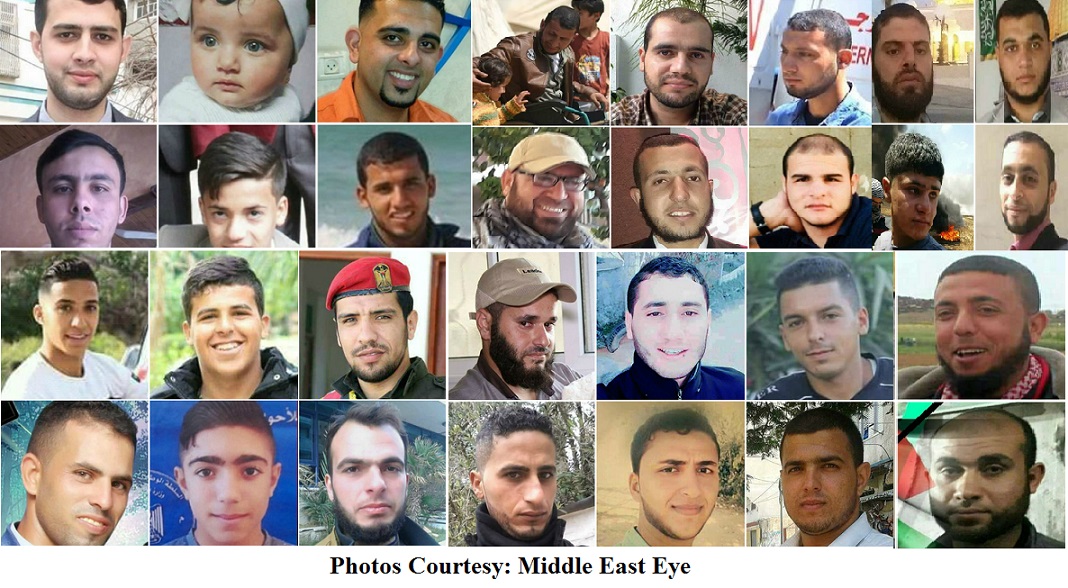 “58-0” Is what noted journalistic Republican troll Laura Loomer tweeted with excitement on the day of the first killings this week. It took a couple of hours of gunfire for the number to reach that high before she tweeted, which means she was waiting in masturbatory anticipation for a final score as if murder were a sport. Actually, the number reached 61. Seven of those were children. Do children county as half a point Sarah? One of those children was an 8 month old infant who choked to death on drone deployed tear gas. At least one was a paramedic attending one of the over 1350 gunshot wounds was also killed by a sniper. 18 other medical professional were amongst those wounded by gunfire. This was methodical killing. First a sniper would wound one person, then shoot those who tried to treat or evacuate that person. The wounded included a Canadian doctor who barely survived. 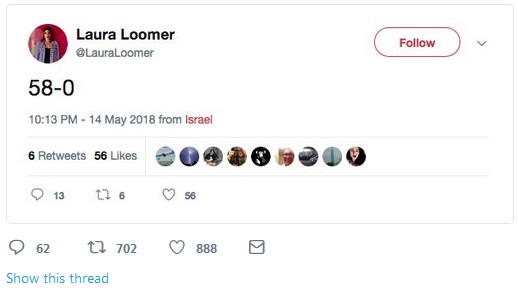 In Gaza, where 97% of the water is unsafe to drink and Israel cuts of the electricity that drives the water pumps and sewage plants 20 of 24 hours every day, 19 medical professionals as casualties means 19 people who can not diagnose and treat disease caused by the everyday conditions of being an occupied nation targeted for wholesale genocide. This is the score the really gets Laura Loomer motor running. She did not include the 1350 wounded by gunfire, nor the 1400 more treated for other wounds in by the Palestinian authority's health system. 61 dead and 2750 wounded are the numbers listed by that Authority, which is the health ministry of a nation recognized by the UN.

It is not as though Ms Loomer is a random alt-right troll on twitter. She is a working right wing reporter formerly employed by Project Veritas, a right wing media outlet known for doctoring videos, and using entrapment in support of hard right causes. Their Wikipedia page reads like a rambling hit parade of dirty tricks, and it is but a mere summary of the work they've done. Loomer is a hard core hard right media operative with reach far out of proportion to her intellect and moral fiber.

Israel injected it's own narrative into America's national conversation. It went from Netanyahu's mouth to CBS's ears to America's living rooms. “Hamas is paying these people. Their pushing civilians, women, children into the line of fire with a view of getting casualties.” The man who order the snipers to fire through a fence on children and doctors instantly changed the narrative. There was no “line of fire” that was not created on his orders and authority. He also did not offer a price on an 8 month old child's life in Gaza? CBS failed to question, or solicit evidence on the price of Loomer's “score.”

The Democratic party quickly echoed this line through both Congressional mouthpieces and tightly aligned media personalities. Netanyahu provided the talking points while Minority Whip Steve Hoyer and centrist comedian turned pundit Bill Maher repeated them until they became liberal gospel. It was like a perversion of the Chumbawamba's 1986 debut punk album “Pictures of Starving Children Sell Records”, which was cut to point out that the record companies profited from LiveAid and BandAid while the artists donated their time and money to famine relief. Leave it to an occupier to colonize punk rock with a little help from a Democrat. 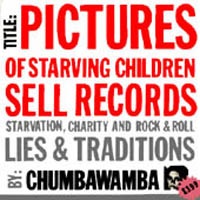 Steve Hoyer is the number 2 democrat in Congress. He is Nancy Pelosi's enforcer and according to the Intercept, he spends a good deal of time bullying progressives to drop out of primaries in order to clear the path for DNC approved centrist candidates. Hoyer was first and loudest out of the gate in the race to amplify Netanyahu's line to CBS “Hamas has undertaken to use, to continue to use violence, to continue to use the threat of … going into Israel, and continue to use human shields — all of which is unfortunate. And Israel is in a very difficult situation, when probably large numbers of people want to enter Israel from a place that has been threatening Israel for some years now,”

It takes real talent to pack that many lies into a single paragraph. Hamas did not organize the protests. There were no armed people at the protest. There were no combatants that were “shielded”, human or otherwise. Gaza is not a place that has been “threatening Israel for some years now. Gaza is Palestine and has been part of the UN mandate as Palestine since 1948. It has been occupied since 1967 and is slowly being dismantled and settled by Israel. Steve Hoyer thinks that America can not read a map or has not read a single history book. If Congress wanted to see the present day conditions in Gaza, they would not be allowed. This week, 5 members of Congress were denied access to Gaza by Israel on a fact finding mission, exactly because they are not ardent in their support for baby killing.

Meanwhile, Centrist Pundit Bill Maher echo the same “the dirty bad brown people made their kids do it” line. Maher, who describes himself as a “9/11 Progressive”, which means supporting gay rights and torture, fielded softball questions about the massacre and went straight to victim blaming on his show. When asked if Palestinians deliberately got their own children killed as some kind of photo op, he replied “Oh They Absolutely Planned That, I Agree.” 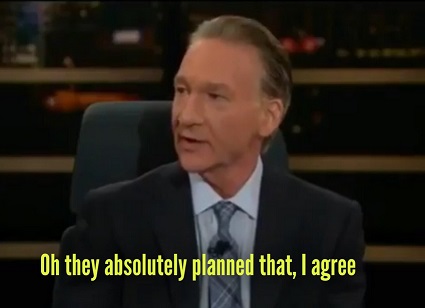 This is classic racist dehumanization of the other. Maher's comment is designed to keep us from connecting with the loss and grief suffered by families through the mechanism of leading us to believe they killed their own children to get on American television. This is the racist narcissistic heart of American media and politics on display.

It is clear that the bi-partisan handshake reaches across the Congressional aisle and into each other's laps when it comes to genocide and colonialism. The same voices that force progressive candidates out of primaries justify murder of children with the thinnest of lies. Meanwhile, Republican pundits keep score and cheer.