Whips on the Border: A Narrative Nearly Devoid of Facts. 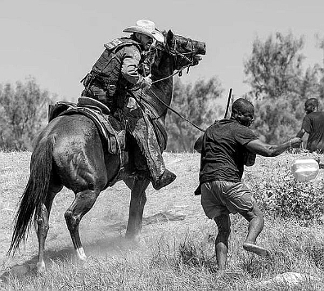 “The Party told you to reject the evidence of your eyes and ears. It was their final, most essential command.” – George Orwell, 1984

This Author has a weapons collection. It is not a very large collection, as I am not that economically empowered. As I am American, it includes firearms, but few and in the categories that I need for home defense. The portion of the collection that is not firearms is the part that is relevant to the scenes of CPB agents whipping Haitian asylum seekers at the US – Mexico border broadcast around the world on September 21st 2021.

I own weapons that are medieval replicas. They are functional. They are not the best nor the most stylish examples that can be purchased but they are at a good price point for me while still being actually worth taking into the fight should I ever somehow be in an actual medieval battle. I have a wish list of better ones I would like, and I know which manufacturers are reputable. I am competant to use this weapons.

I have no idea how to purchase a whip. I have no idea how to use a whip in combat. A whip is a tool of torture not a weapon of war. I did a quick check of the internet to see who makes whips, where I can buy one, and who might sell a whip to an CPB agent. This is where the obvious lies began.

I looked closely at all the available pictures of the incident I could find to see if I could identify the type of whip being used. I could not. The whips being used lacked the taper of a bullwhip. They were longer than any riding crop or dressage rod. They were clearly a manufactured not a custom item as all the agents pictured were using identical torture tools.

The Fraternal Order of Police, who are eternally on brand when it comes to advocating for greater human rights abuse, claimed that the torture tools were reins not whips. Their Grand Lodge, which is what they call their national office, took to twitter to rebuke anyone for speaking up:

“For all you Twitter warriors out there: these are NOT whips. And no, Border Patrol agents are NOT "whipping" people. They are REINS... Stay with us here, like a steering wheel is used to drive a car, the reins are used to “drive” the horse. Thanks for coming to our TED talk.”

I do not own a horse. I have never ridden a horse. I have seen people riding horses and all the reins I have ever seen have been closed loops. However, since my experience scant, I went and had a look at all kinds of reins. All the reins that I could find for purchase were designed to be a closed loop. Where the reins were detachable from the rest of the horse steering equipment, they had a metal buckle, or loop or some other method of attaching this strip of leather at both ends. As can be seen in the photo below, the things used for whipping do not. 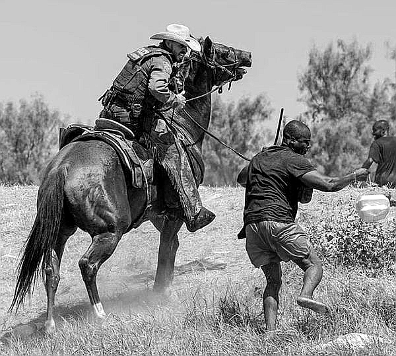 Despite the claims of the FOP, and a conservative blog in Canada, these are not reins. These are whips. It is possible there is a kind of equipment that I do not have the vocabulary to search for. If so, it is obscure equipment that was selected for this specific purpose. That makes these special reins whips regardless of what is written on the shipping label. This makes the line of questioning turn to how did CPB agents all get the same whip? Did a group of them all order from the same custom shop in preparation for bring your whip to work day? If the answer is no, then the federal government purchased these whips. That makes this act policy.

Kamala Harris, who would love to have more detainees inside the country as she loves prison labor the way cops love donuts, has wrung her hands. Investigations have been promised. They will be toothless. These crimes were not committed in America. They were committed in the lawless space between America and Mexico. The point of the whipping was to force the victims away from American soil and thus outside of where they could claim asylum.

This is not the first recent investigation of Border Patrol crowd control methods. Last year, masked men in plainclothes operating unmarked vehicles were seen snatching protestors off the streets of Portland Oregon during anti-police brutality protests. As it turns out, the Department of Homeland Security had given itself the right to do local law enforcement because of perceived threats to ICE. offices in the city. An investigation was conducted.

The investigation into the secret squads of unidentified federal agents with unmarked vehicles snatching people at night concluded faults with agency procedures. CBP agents had been used, and although they were qualified in the use of less than lethal weapons, not all of them had taken their yearly refresher course on how to shoot people in the back with rubber bullets. The report also found that there was not enough riot control equipment for all the agents to be uniform in appearance. The full text of that report is available at the bottom of this article for download.

As this story wanes from the news cycle another investigation will be made, and it's results will be released with little fanfare sometime next year. The report will reach a similar conclusion that the last one reached, only tailored for the border. It will be concluded the agents need more training, more “proper equipment” and more resources. This is in line with Democratic Party thinking that if only we had more camera friendly ways to torture people, Joe Biden would not be embarrassed while reading a teleprompter at the U.N.