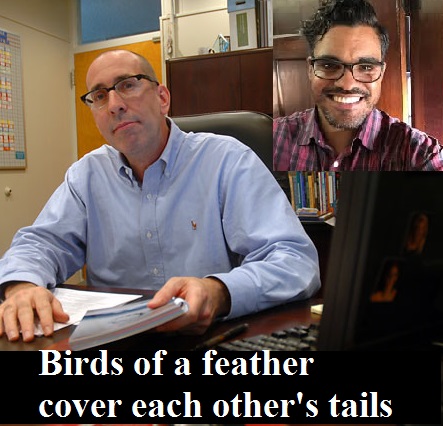 Facts and testimony both new and previously released contradict the ill informed conclusion that the Board and the Superintendent knew nothing and therefore did nothing wrong. Walking down the chain of events during the 2017-2018 school year quickly shows this is a lie. Combining that with information direct from sources upgrades this chain of events into what we in the news business call in technical terms “a pack of damn lies.” These are lies told to both people who have sat in the editors chair at the Yellow Spring News, and to parents of the child survivors directly by Basora himself.

The massively condensed chain of events is as six key elements. In the very beginning of the last school year, a student came forward alleging sexual assault by Principal Tim Krier's son Noah Krier. The second event was that another student threatened to drug and rape a fellow student, this triggered an external investigation, excerpts of which have been published here. The third event was Noah Krier being formally charged in his first incident. The fourth event was the parents of the student in the second event filing a Title IX suit in November. The fifth event, on March 8th, was a report of several students being involved in a sexual assault, Noah Krier disappearing from school grounds before the police arrived and Tim Krier going on a paid leave until after the end of the school year. The sixth event was the School Board announcing they did not have a problem and Tim Krier would be receiving a year's salary for doing nothing.

The contradiction can be instantly seen. In the third event, charges were filed against a student, who was the Principal's son and yet somehow the Superintendent did not know? Krier and Basora both participated in and received copy of an external investigation carried out around the November incident. The September incident was not mentioned. This is a key piece of context for said investigation, and by that time Noah Krier had been charged. Either Tim Krier never told Mario Basora that there was an additional complaint and that he was the school system's point person for the welfare of the survivor and deliberately concealed from the investigator or Mario Basora knew and assisted in concealing it from the investigator. If Krier never told Basora, Basora should have fired him on the spot.

Basora did not reach out to talk to the parents of the survivor in the first incident until March 9th. They have since filed yet another Title IX complaint. During that conversation Basora claimed this was the first he had heard of problems. This is a provable lie as there had already been an investigation into another incident which he was definitely in the loop on. One of the remaining questions is how many incidents is Basora lying about being unaware of?

As Spring turned to summer the Board went about it's business of attempting to raise taxes to pay for a bigger rape camp for Krier to run and suing former teachers in retaliation for speaking out about bullying by both Tim Krier and his rapist son. During the whole year, Kim Krier, the family matriarch, yoga teacher and counselor in Columbus engaged in online dialogue with the mother of the survivor in the first case.

Kim Krier's narrative centered around keeping the situation quiet because “people's reputations were on the line.” This intimates a threat against the accuser and comes from the wife of the principal and mother of the attacker. She will be working in Columbus in the mental health field while her husband collects $108,000 in taxpayer money for doing not one thing.

June became July and Mario Basora won a taxpayer financed trip to Europe as attorneys for the school board filed for extensions in the discovery motions surrounding the Bussey case. Thus this supposed “outside investigation” that was conducted by unnamed parties and that no citizen has seen cleared Basora while he was on vacation followed by being involved in a document intensive part of yet another court case related to both Noah and Tim Krier. When stated plainly in a factual context the claims of the board and the results of this semi-mythical investigation are in a word bullshit.

There is an unconfirmed report that Kim Krier picked up Noah Krier on March 8th, before the police were officially called. Despite the entire staff, who like Tim Krier are mandatory reporters, knowing about the 3rd incident the police did not receive a call until after both school was over and all the parents, including Krier, were informed. As the Mockingbird was working on other related stories, the call logs from Chief Carlson's until then secret iPhone for the time period came to light. Despite a lawsuit, the entirety of March 8th was delivered redacted. The claim is that these are personal calls, despite personal calls not being permitted on Village issued phones and despite the fact that other personal calls on other days were not redacted.

In the flurry of phone calls on March 8th, was the entire incident kept out of police record until Noah Krier was spirited away by his mother who likes to remind other mothers that “people's reputations are on the line?” Was Mario Basora one of those calls? What level of coordination between the police and the school board was there? If Mario Basora was one or more of those calls did he coordinate a response? Was often recused and always duplicitous Board President Aida Mehermic one of those calls? Did Mario call her? Was she aware of the November investigation? Were either she or Basora aware that the wife of the principal and mother of the accused in the first incident was attempting to dialogue with the mother of a survivor in order to calm things down?

The Mockingbird will get all the answers. As we do we will share them. What is clear is that there are more lies yet to be uncovered. What is not clear is how the citizens and taxpayers of Yellow Springs will hold their employees accountable for the safety of their children. There is a school board meeting this coming Thursday, September 13th. Many parents with tough questions intend to be there despite the public not being permitted to speak for all intents and purposes.