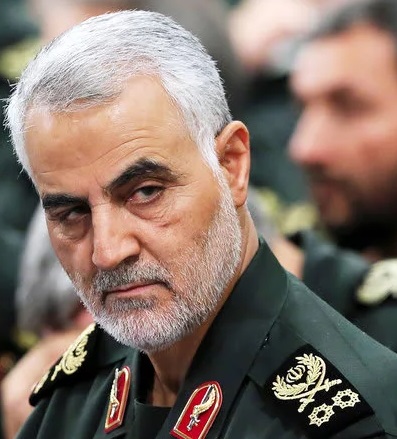 Killing a serving officer in a foreign army is an act of war regardless of what hyperbole one side uses to describe the other. It is said that the first casualty of war is truth. It should be said that the second death is good writing. News becomes even more propaganda than it was before the start of the official shooting and ideas become catch-all phrases become slogans that become meaningless.

Soleimani as a military strategist in asymmetrical warfare was the architect of Iran's current defense posture, one that assumes that war can start at any moment with some combination of The United States, Israel, Saudi Arabia and their puppets. His death is a precondition of any attempt to attack Iran.

It will be claimed that this strike was in retaliation for a violent protest that occupied parts of the United States embassy in Baghdad 3 days ago. The parts of the embassy compound that were lost were retaken with the loss of a single military contractor's life. That excuse rings even more hollow when one realizes that Soleimani could have been struck with a drone at many points earlier in time, so this moment is not a mere coincidence, a pure lucky chance that a brave president took.

There is a sequence of events that this is the middle, not the beginning of, and the end is a long war. Rather than look at the long, complex and hateful relationship between the United States and Iran, or fall to sloppy thinking about impeachment and distractions, we should look at recent facts about money. Tom Clancy once said “War is armed robbery writ large” so we should look at the money. After that we should look at the motion of the weapons. Then we will know what we are in for.

The BBC announced on November 10th 2019 that 53 billion barrels of oil reserves had just been discovered in Iran. This is a whole new oil field. As of today 1 barrel is worth $63.06. That means that less than 2 months ago Iran discovered an additional $3.342 trillion under it's soil that nobody, including them, knew that they had in addition to their 158 billion barrels in proven reserves. They went from having 25% less than Saudi Arabia to having 10% more. $3.342 trillion is a huge sum of money. It is equal to (Elon Musk + Warren Buffett + Jeff Bezos) times 14.69.

The deal with the United States that keeps the theocratic regime in power in Saudi Arabia is the underpinning of the world economy. Saudi Arabia and their puppets within OPEC only sell oil in dollar denominated transactions. It takes dollars to buy oil on the world market and this makes the borrowing power of the United States government mighty. Other nations buy our debt to get dollars to get oil which they burn. We sell them treasury bonds and they burn the payments which we print. This scheme is called the petrodollar.

Sanctions on Iran, ostensibly because they want nuclear weapons like every other major power, are part of a strategy of conflict called lawfare. These sanctions keep Iran from banking within the international system and thus keep them from selling oil in many places. This drives the world supply of oil artificially down, and thus keeps the price artificially high. Another country subject to similar sanctions is Venezuela, which has the worlds largest oil reserves, ahead of both Saudi Arabia and Iraq. The United States wants the value of the dollar high at certain times, and low at others. This depends on if we are borrowing money or paying off debt.

This is the why the when of a war with Iran is now. The troops are already in motion. The ready brigade of the 82nd Airborne division is headed “to the region” as I am writing this. According to anonymous sources that have good reason to know, the aircraft that are carrying them are also carrying body bags for them. Informed sources have told the Mockingbird that they body bags are always sent, as they make good sandbags, but the sources expressed concern for the welfare of the troops in a way that is not characteristically voiced.

This move comes as Russia, China and Iran are conducting their first joint naval exercises in the Persian Gulf. This set of exercises began before either the embassy takeover or the assassination took place. The normal US supremacy at sea has been transformed into mere sea superiority, which is still good for the US Navy, but less than ideal for the US Marine Corps. A naval conflict in or near the Straits of Hormuz endanger the tanker traffic of not just Iran, but the exports of Saudi Arabia, The UE, Kuwait, Iraq and Yemen. The price goes up and one can be sure that shipping insurance brokers are demanding higher premiums this very instant.

As a practical matter, Americas should probably fill their gas tanks within the next 24 hours, as oil prices are up, and this gasoline prices will go up, and oil futures are down, which means nobody wants to bet on them at all. Iran has promised retaliation, and one can be assured they will make good on that promised. Their government has called for a three day national period of morning, which translates to a massive three day period of frantic diplomatic manuvering before the shooting begins in earnest.

War Hawks in both parties in Washington are falling over themselves with enthusiasm at the prospect of regime change in Iran. This is not going to happen. Iran is not Iraq. It is made out of mountains not river valleys. Any regime change will mean a long war and a long war will mean a draft. Make no mistake, Donald Trump's impulse murder just set us on a course for a very expensive decade of war.