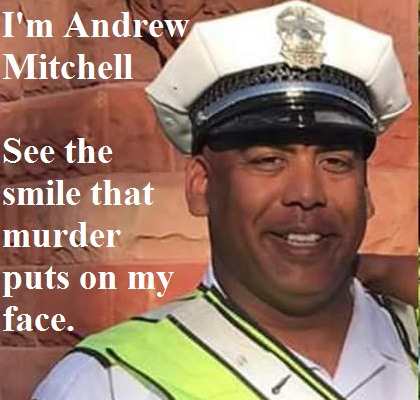 Family and friends spoke out at a rally held for Donna Dalton exactly one week after detective Andrew Mitchell murdered her in a parking lot on August 23rd. The police attempted to control the narrative while continuing to stonewall. The rally had been called by a group on social media. According to sources the unnamed group had planned the rally within blocks of the scene of the crime without consulting the family but while inviting the police to speak and speak first.

As seen near the beginning of the video above police tried to focus the discussion on what they were going to permit, and wanted to use the rally as a controlled venting of community outrage rather than allow it to become a demonstration of popular power or permit the asking of questions. They went so far as to bring mental health professionals from NetCare a local “non-profit” with a board of executives from major banks, well connected lawyers and business consultants. The baseline was assumption was that the trauma of a murder by police is a mental health problem that is the traumatized persons fault and should be dealt with by professionals that work directly with the murdering police force.

After receiving a cool reception and being sure to tell people what expressions of outrage they would be arrested for, the crowd got hot and the police retreated to join other police across the street in monitoring the crown through cameras and binoculars as an obvious act of attempted intimidation.

Multiple family members spoke, and some of their comments can be viewed and heard above. This reporter received multiple reports of witnesses to Donna Dalton's murder and the events immediately preceding it being afraid to come forward. Some are afraid to speak on the record for fear that even what they know would identify them and cause the police to murder them next or imprison them. This publication has circulated contact information in the area and awaits witnesses that are ready to speak on their own terms.

As of yesterday, September 4th, no city official has expressed any form of condolence to the family nor offered direct information. The murdering police officer was already under investigation for other incidents of misconduct and had been investigated in the past. Despite initial reports that there was no video or audio of the incident, family members have said that at least one press source leaked to them that there is an in car audio recording. The government has not confirmed this nor spoken to the family about the investigation and the unnamed media outlet has also not released the audio in part or as a whole.

Donna Dalton's remains had not yet been released to the family for funeral services or an independent autopsy. Her family is having to raise money for her final expenses and are doing so through an online campaign which can be found here.

No rape kit has been performed despite the alleged arrest turned actual murder being for a so-called sex crime. Combining the lack of interest in physical evidence with zero communications and withholding of audio equals at least the strong appearance of a coverup.

Following the family speaking to the visible limits of their emotional ability to do so over 100 people marched through the West side neighborhood, taking to the streets despite prior police threats if they did so.

The police did not intervene with the exception of one vehicle which approached with lights on and then withdrew without incident or comment when met with jeers and admonition from the crowd.

As more details come to light, it becomes more and more evident that Donna Dalton was not killed for anything she did, but was instead killed for something she knew. Eventually the world will know what she knew as well and her death will not have been a natural occurrence, a consequence of living in a working class neighborhood, an occupational hazard or a non-event like a leaf falling to the ground.

We will continue to report the facts as they become available and can be confirmed.