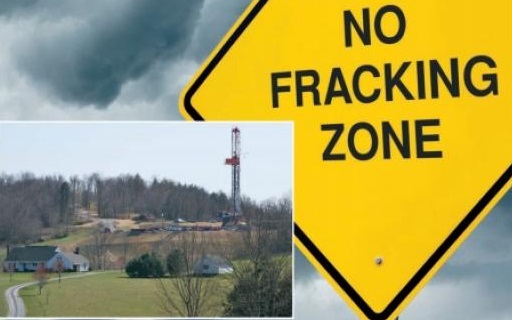 Over the last five years, the Youngstown, Ohio region has suffered over 700 man-made earthquakes, an illegal dumping of fracking waste into our river, accidental spills that destroyed private ponds and a small wetland, the trucking of radioactive solid fracking-waste into a low-income neighborhood and shale-gas fracking in the Safe Drinking Water Source Protection Area of our water supply, the Meander Reservoir. Because our elected officials have refused to prevent these ongoing harms to public health and safety, Frackfree Mahoning Valley and the Youngstown Community Bill of Rights Committee are using the ballot box to codify into law our rights as citizens to clean air, clean water and a sustainable future. This battle to codify the unalienable rights of citizens over the privileges of corporations and the self-interests of some elected officials, political parties, and community leaders, began in 2013. In 2015, the Community Bill of Rights (CBR) charter amendment only lost by 299 votes out of over 12,000 votes cast.

The 2016 Democratic Platform states; “We believe hydraulic fracturing should not take place where states and local communities oppose it… low-income communities and communities of color are disproportionately home to environmental justice “hot spots,” where air pollution, water pollution, and toxic hazards like lead increase health and economic hardship. … Simply put, this is environmental racism.” (p. 28)

Unfortunately, many Democratic Party “leaders” in the Mahoning Valley do not support the Democratic Platform and continue to represent industry's best interests.  Since 2013, the Mahoning Valley Democratic Party and the Ohio Democratic Party have each received $29,500 from the American Petroleum Institute. Youngstown was the only community out of nine communities with previous Bills of Rights on the ballot to receive mailings from the Ohio Democratic Party urging a NO vote on the CBR charter amendment.   In September 2016, many residents received a biased telephone push poll, pretending to be an opinion survey.  When Ray initially asked the pollster what company he is working for, he said he was calling from a National Survey Research Company. When further probed, he answered National Survey Research Company SSI. SSI is most likely Survey Sampling International with an office in Perrysburg, Ohio. We reached out by phone to both National Survey Research in Cleveland and SSI.  A spokesperson for National Survey Research said they were not surveying in Youngstown.  A message left with SSI was never returned. Unless proven otherwise, we assert that this push poll was conducted on behalf of the Mahoning Valley Coalition for Job Growth and Investment, a group formed solely to oppose the CBR charter amendment. What follows is a transcript of the push poll and our responses.

“Should the Youngstown Home Rule Charter be amended to add a Community Bill of Rights which protects those rights, among other things prohibiting the use of hydrofracturing, bans the publishment of infrastructures supporting gas production, and bans the storage, transportation or depositing of gas drilling waste products within the city. Would you vote yes in favor or no, against this charter amendment?”

1) “The amendment was adopted by a group of extreme anti-development activist out of the Pennsylvania. This is the same fringe group that travels across the country trying to shut down factories and construction projects of all types. Does this information make you more likely or less likely to support the charter amendment?”

RESPONSE: Youngstown residents had exhausted all the “normal channels” they thought were in place to help with citizen concerns such as contacting our council members and mayor, attending and speaking at city council and county commissioner meetings and contacting our state representatives with scientific facts and concerns. We also contacted state agencies including the OEPA, and the ODNR with very real issues of concern. These issues included earthquakes from an injection well, the discovery of four fracking wells in our Meander Drinking Water Source Protection Area, and public records showing the sale of the deep drilling rights under Mill Creek Park to Chesapeake and later flipped to foreign interests. A local attorney told us about the Community Environmental Legal Defense Fund (CELDF) and we began having conference calls over several months in 2012. THIS is how the CBR was created. We EVEN started with an ordinance proposal that our council could pass to protect the citizens they serve, but council just ignored us and so the citizens used the initiative process to pass a law FOR the citizens BY the citizens to protect our community.The disasters continued, including toxic dumping of fracking waste into the Mahoning River (a drinking water source for some downstream), a radioactive processing center for drill cuttings 1/4 mile from the Youngstown School bus garage, the earthquakes in Poland and Niles/Weathersfield, and the poisoning of waterways by the Kleese injection well in Vienna. And since 2013, we have had three notices of VIOLATION in our water bills, describing a lack of testing for certain chemicals, trihalomethane levels exceeding EPA Standards, and in the May 2016 bill, a Consumer Confidence report stating no water testing has been done since last year.The citizens sought help from CELDF, a non-profit, public interest law firm that assists communities who want to assert their democratic right to propose and pass laws to protect their communities. Their main office is in Pennsylvania. The O&G industry uses multi-million-dollar corporate law firms with offices in big cities around the country and world.  In September 2015, the Mahoning County Board of Elections (BOE) made a request to the County Commissioners and was given approval to use $30,000 dollars of tax payers’ money to hire a pro O&G lobbyist law firm, Vorys, Sater, Seymour and Pease LLP, with offices in Columbus, OH as well as PA, TX, and Washington D.C. This law firm was hired to defend the BOE’s illegal vote to keep the CBR charter amendment off the ballot. The BOE took this action EVEN after our County Prosecutor told them that what they had done was illegal; that they did NOT have the authority to decide what goes on the ballot. The Supreme Court also agreed 7-0 that valid citizen petitions must be placed on the ballot; Boards of Elections do not have that authority.

2) “This amendment could drive up the cost of electricity and other utility rates, making it even tougher for families to make ends meet. Would you vote more likely or less likely to support that charter amendment?”RESPONSE: Electricity rates are set at the state level. This is a "fear tactic" designed to get you to vote against your own best interest.

3) “This amendment is opposed by local labor, businesses, elected and community leaders, Democrats and Republicans, because they realize this would further damage our economy that is already struggling to create good paying jobs. Does this information make you more likely or less likely to support the charter amendment?”RESPONSE: Our opponents, the Mahoning Valley Coalition for Job Growth and Investment, include some elected officials, political parties, local business, union and church leaders, who seem to put their self-interests ahead of those they serve and who also seem to support profit and pollution over the health and safety of the citizens of Youngstown and the environment that sustains us. LOTS OF MONEY has been funneled into defeating this citizens’ push to legalize democracy – hundreds of thousands of dollars over the past few years, including our newest find -- the American Petroleum Institute (API) has given the Mahoning County Democratic Party and the Ohio Democratic Party donations of $29,500 each since March of 2013. As mentioned above, Youngstown was the only community out of nine communities with previous Bills of Rights on the ballot to receive mailings from the Ohio Democratic Party urging a NO vote on the Youngstown CBR charter amendment.

4) “The amendment has already cost Youngstown taxpayers over $80,000 dollars in election administration fees and has been defeated at the ballot five times. Those that continue to push it are disrespecting voters and taxpayers. Does this information make you more likely or less likely to support the charter amendment?”RESPONSE:The $80,000 figure is based on Board of Elections employees’ time that they would have been paid regardless of the CBR being on the ballot. It did cost an extra seventeen cents per voter in 2014, but nothing in 2015 because there wasn't an extra page on the ballot. There have been no special elections because of the CBR, and it is actually the City Law Director who has increased the cost to taxpayers by insisting that the entire language of the CBR go on the ballot. This is NOT required by law; a summary is all that Ohio law requires. Since 2012, ALL eight other cities in Ohio with a CBR on the ballot had a one-paragraph summary, and that was sufficient--just not in Youngstown. The City Law Director insists on putting the entire CBR on the ballot; and incidentally, the city is charged for the length of the ballot. So, increased costs to give the voters of Youngstown a voice has been in large part due to the city's decision, and we believe that this decision is a way to confuse and discourage citizens from voting in their best interest.5) “Broadview Heights passed a similar charter amendment and ended up in a costly lawsuit. Similar lawsuits have been seen across the country, with legal fees straining the coffers of the communities. Passing these amendments may take away tax dollars that should go to police, firefighters and projects that will make a city a better place to live. Does this information make you more likely or less likely to support the charter amendment?”RESPONSE: Broadview Heights did not end up in a costly lawsuit. The city didn't file bankruptcy, and they still have fire and police protection. Also, CELDF offered free legal counsel to the city, and the city refused. This is another scare tactic by the opposition to get you to vote against your own best interest. Has there been any drilling in Broadview Heights? NO, and THIS is what it is all about – stopping the dangers in the places where we live.

6) “The amendment will kill good paying jobs and chase away future projects hurting everyone in Youngstown and especially those that work in construction and manufacturing. Does this information make you more likely or less likely to support the Charter Amendment?”

RESPONSE: The construction jobs associated with the oil/gas industry are temporary, and many times the companies bring in out-of-state workers who travel with the projects. Youngstown COULD focus on manufacturing jobs for the future in renewable energy, but instead the Mahoning Valley Coalition for Job Growth and Investment seems to want to focus on the promises of a "boom and bust" extraction industry that has a reputation of discarding workers and communities when they have made their profits. Our city has given VERY GENEROUS subsidies and tax abatements to attract O&G Industry-related businesses, including over $85,000 to EXTERRAN, a manufacturer of compressor station parts for the fracking industry, which shut down its operations in late 2015.The POLL ends with these last two questions:“After hearing more about the charter amendment called the Community Bill of Rights, would you vote yes in favor or no, against this charter amendment?”

“Thinking generally about the oil and gas industry, do you believe Ohio's oil and gas development will improve or harm your quality of life?”

RESPONSE: There are now over one hundred peer-reviewed scientific journal articles documenting the harms associated with shale gas development. Dick Cheney’s 2005 Energy Bill gave the oil and gas industry free reign to pollute for profit and the science has now confirmed that the threats to air, water, and human health are substantial. Moreover, the continued burning of fossil fuels, including methane, will further intensify global climate change. The O&G industry’s attempts to quickly build new infrastructure, like pipelines and methane-burning power plants, will lock our regional economy into decades of continued fossil fuel consumption, and seriously threaten life on this planet.