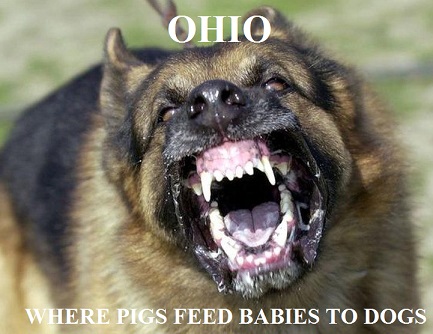 The Mockingbird, along with journalists from a number of other publications, including CounterPunch, Unicorn Riot, Muckrock, the Huffington Post and many others have been participating in an Anonymous lead effort to explore and expose the connections between ICE, it's concentration camps, it's contractors, Big Data, and local law enforcement. This effort is known as #opclaudia and is linked with Barrett Brown's Pursuance Project. In the course of this effort involving nearly three dozen journalists, a particularly sickening contribution by the Ohio State Patrol (OSP) has come to light. OSP will help hunt immigrants with their new cohort of attack dogs.

OSP has volunteered the use of their German shepherds for the latest batch of roundups. This of course mirrors the exact same breed and tactics used by the Gestapo during World War II to hunt Jews cringing in hidden rooms in basements and attics. Lieutenant Jon Payer must have finally achieved his long lost and sought turgidity when signing the agreement with ICE to deploy an unnamed K-9 Sergeant and at least one additional trooper to aid the effort.

The Ohio State Patrol, like many law enforcement agencies, signed agreements called Memorandums of Understanding (MOU) with ICE well ahead of Trumps roundups on April 22, 2018. These MOUs last for two years and may be extended. The date of signing came before an expansion of Ohio's effort to place more attack dogs on the streets with the announced opening of a new statewide attack dog training facility in Marysville in December of 2018. Apparently this expanded training will first be used en mass to support concentration camps.

The Columbus Dispatch Article on December 17th 2018 opened with a scene of a dog savagely attacking a car door with hidden marijuana in a state where marijuana is increasingly legal and opioid overdoses are the only thing that kills more people than police bullets in the back. This new expansion of capability becomes more suspect when the rest of MOU is read. It contains no other help for ICE. The State of Ohio only has attack dogs to offer, nothing else.

The contributions to ICE's ethnic cleansing throughout the state of Ohio were well documented last year in this article. Additional contributions have been made, both by local law enforcement and by Columbus local companies looking to get in on the taxpayer funded effort to make America as white as possible. Just as IG Farben, the makers of Bayer Asprin, happily manufactured zyclon b for Hitler's gas chambers, many Columbus based or operating companies would love to cash in on the seperation of families as well as the torture and death of children.

All the names will be named in subsequent articles.