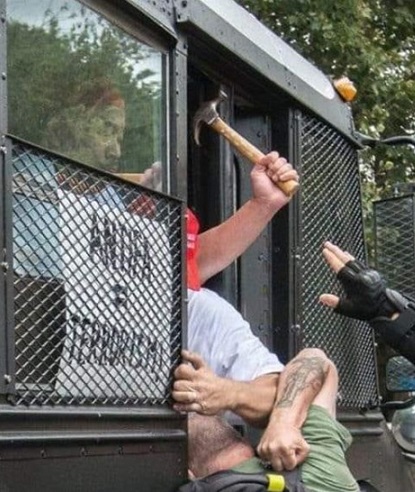 On Saturday August 17th, the Neo-Nazi Proud Boys were marching in the Columbus suburb of Dublin, where they feel good and comfortable. Their comfortable support was not just for the President who supported them on twitter, but for their fellow Proud Boys in Portland Oregon. That bunch of fascists was marching alongside the group that organized the event, Patriot Prayer, and under the protection of an exceedingly violent Neo-Nazi organization called the American Guard. The Proud Boy - Patriot Prayer Portland marches are a common occurrence in recent years, with this being the fifth such event the Mockingbird has covered since the beginning of the Trump Presidency.

There is always heavy police protection for the fascists at these events, even when the fascists are caught setting up sniper nests on buildings by police. The typical day consists of the Police planning logistics directly with the fascists, as investigative reporters in posession of positively friendly texts between the police and fascist leadership have proved, followed by a march where the more militant fascists break away and attack the crowd. This is followed by the police attacking anti-fascist demonstrators when they successfully fight back. They Mayor then appeals to everyone to stay home and let the fascists and police do as they please. The last part of this act is the police and national Republican politicians including Ted Cruz and the Orange skull condemning the Mayor.

These marches are small scale coup attempts, warm ups if you will, and are met with tepid political opposition by the City Government in the same fashion that the Chamberlain defended Czechoslovakia. This weekends festivities had only the slightest of differences.

There was an arrest warrant out for Patriot Prayer leader Joey Gibson, who came down to oversee his event from his home in Vancouver Washington. He turned himself in with his expensive lawyers and was immediately released to get started with his police protected riot.

The police closed throughfares to enable the march, including a major bridge across the river, giving local residents a traffic nightmare and the fascists a photo opportunity. The actual rally at the end of the march included support for the President, the national anthem, and then provocations and combat. One neo-nazi was photographed in confrontation with a black counter demonstrator with what appears to be urine running down his leg. No Proud Boys were immediately on hand to lap up the fluid, which they do for each other as part of a well documented rite for promotion within their organization.

Police made 13 arrests as the fascist were pursued to their waiting converted school buses to be evacuated with more police protection. One of these schools buses belong to the American Guard and it is the subject of Andy Ngo's lies of the week. The American Guard is an organization founded by long time nazi skinhead Brien James out of a previous group called the Vinlanders social club (VSC). The VSC was active in Ohio and Indiana in since the late 1990s and is responsible for at least nine murders.

Upon reaching the bus, at least one American guard member attempted to pull a counter demonstrator onto the bus and beat him with a hammer, as shown in the picture at the top of this article. Fortunately for his intended victim, he was deprived of the hammer by counter demonstrators before leaving under police protection. Because he was not successful in his attempted murder Andy Ngo's so-called reporting turned the event into “anti-fascists attacking peaceful demonstrators with weapons including a hammer”

The right wing twittersphere has of course taken up Ngo's claims, which anyone reading this article can see with their own eyes are lies, and trumpeted them around the internet and back again. They are doing this as they feel buoyed by Trump's tweet that morning in support for their actions, which can be seen below.

The messaging of Patriot Prayer and their supporters is now fixated on being against anti-fascists more than anything else. They have realized that their only path to power is to violently suppress any opposition and they seek to do so with direct government support. This is echoed in Ted Cruz's proposed Senate Resolution to label “antifa” a terrorist organization, Donald Trump's tweets, and Patriot Prayer's promise to return to Portland monthly. The latter was made yesterday and will give both them and the police department ample opportunity to attack the public in the coming months.