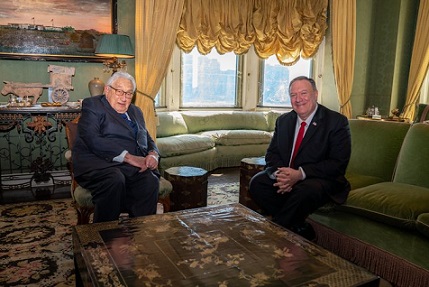 The world can stop wondering if last night's apparently less than effective missile attacks by Iran on three US airbases in Iraq are the one and done of a tit for tat round of posturing of two authoritarian regimes in crisis rallying their respective domestic political bases. This is not even the end of the beginning of a war. A more clear picture is beginning to emerge of a war of choice being initiated by the United States at urging of Secretary of State Mike Pompeo in response to the discovery of new and massive untouched oil reserves in Iran.

The strike that killed Solemani was the trigger, but conflict with was being prepared for in advance of this supposed opportunity killing. Consensus was being built, US forces were being deployed, and resignations were being demanded. The decision may have hung in the balance after the September destruction a Saudi oil refinery by a drone strike allegedly launched by Iranian backed Yemeni militias. After the oil was discovered, which was likely some time before the discovery was announced by the secretive Teheran regime, the war preparations began in earnest.

Pompeo has long been a hawk on Iran. It appears the United States was aware of the magnitude of the oil discovery before it's November 10th announcement. In late September Pompeo met with former Playgirl Centerfold and self-described swinger Henry Kissinger. Kissinger, as Secretary of State under Nixon was the architect of the world economy of the last four decades, which has its foundation based on détente between Israel and Saudi Arabia, American trade with an increasingly capitalist China and the petrodollar.

Any public meeting with Kissinger, who at 97 is still active as an advisor and fixer in world politics through his firm Kissinger and Associates, is significant. It is a signal that the person in question is on board with long term American strategic orthodoxy. It the foreign policy equivalent of a blessing from the Pope or what the Chinese refer to as the “mandate of heaven.”

There has been an exodus of officials from the National Security Council, Defense Department and Pentagon in in the last two months. Some of these can be attributed to the fallout over Trump's actions to pardon and protect convicted war criminal and ex-Navy SEAL Eddie Gallagher, although that in an of itself might have been a provocation and a signal that war-crimes are to be tolerated and disloyalty to Presidential meddling is are not tolerated in any way.

The rest of the flurry of resignations took place BEFORE the Soleimani killing and has emptied chairs that should be filled for any large scale long conflict with Iran. These include the following:

Jimmy Stewart – who served as the acting undersecretary of defense for personnel and readiness since October 2018, announced his retirement from federal service on December. 13

This wave of career ending resignations signals a purge of people unwilling or unable to get on board with whatever Pompeo has planned. These moves signal a shift in consensus that echos as loud as “You're not a wartime consigliere ....You're out Tom.” This leaves a total of 21 Under Secretary level Defense Department posts unfilled or filled by “acting” people, who lead from an obviously precarious position.

Combining this concentration of power in reliable hands with Nancy Pelosi's sudden choice to withdraw a war-powers resolution that would limit the President's ability to act from the House and the message is clear that the elites have reached consensus that there will be war. In a matter of days the country has moved from an impeachable act by and impeached but not yet convicted President to a concentration of political power behind war and supporting the President.

The announcement that an additional Carrier Battle Group has been deployed from the Mediterranean to the Persian Gulf to boolster the one already there is a canard. There are almost always two in the region already since the 1980s and there is always at least one ready to transit from a nearby operating area in the Pacific. One has not become two. Two has become four.

The announced cancellation of Exercise African Sea Lion “near” Morocco in order to redeploy the 26th Marine Expeditionary Unit to the area holds back on true intent. Exercise African Sea Lion with the Moroccan Navy normally takes place in the Summer and has not involved a force anywhere near that large since 2012. In short the Marines were on the way weeks before the killing of Soleimani. This coincidence of convenience is actually careful advance planning.

Advance planning on Pompeo's part is evident in the actual killing of Soleimani as well. Pompeo had a long phone conversation about regional affairs with Saudi Crown Prince Mohammad bin Salman bin Abdulaziz Al Saud on December 31st. President Trump spoke with Iraqi Prime Minister Adil Abdul-Mahdi al-Muntafiki and approved of General Soleimani visit that got him killed. The visit was to carry a response to a Saudi request for back channel talks aimed at reducing tensions between the two nations. It is now this was a clear set up orchestrated through the State Department by Pompeo with Presidential approval and assistance in order to get the war started at a moment planned in advance.

The sequence of events is that the United States gains intelligence that first Iran is discovered more oil under it's soil. After that Pompeo meets with Kissinger and consults on the overall plan. The next thing is that all the chairs that need to be emptied are as the troops are deployed. This is followed by a phone call to Saudi Arabia to get them on board and then a series of incidents that culminate in a planned assassination to get the war started. Everyone watching saw fur and teeth, but yes, this is a dog and yes it is wagging.