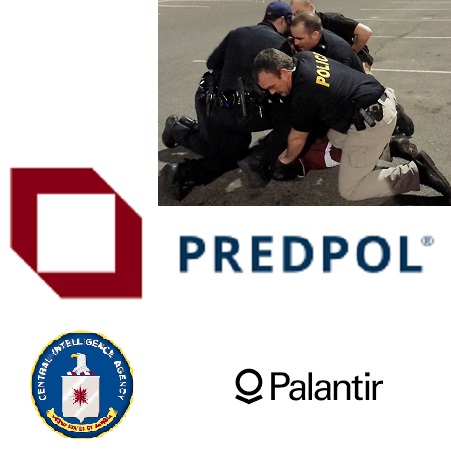 PredPol, a software package used by police departments around the country to allocate resources to certain areas, is named for Predictive Policing and is a product built around the concept. It is made by a company of the same name. It's flagship deployment is in Los Angeles and that is where the threads of intelligence, big data investment, national security, domestic repression and racism come neatly together.

The Los Angeles Police Department has coupled PredPol with another contractor, Palantir to handle so-called police intelligence in the massive framework that such a huge metropolitan area generates information. This allows police reports to be automatically correlated along with input from body cameras, cellphone metadata intercepted by stingray devices, streetlight cameras, and social media by artificial intelligence.

Palantir is not a collection of geeks who come up with new ways to store, access and sort ginormous amounts of data. There are an intelligence corporation that received start up funding from the CIA's venture capital firm In-Q-Tel. They have been active in both the NSA's PRISIM program and in private work to undermine, blackmail and suppress journalists, human rights activists and other dissidents.

Palantir is also not this system's only connection to the CIA. The CEO of PredPol, Brian MacDonald, came to the job from Vidcie, which manufactures wearable video conferencing hardware and software. A small wifi camera on a lapel is great for video conferencing and spies like it to. This is why In-Q-Tel provided their initial start up funds as well. MacDonald was VP of sales at Vidcie, and their customers included federal agencies, local law enforcement and Fortune 500 companies.

Vidcie is also a cloud-based technology. Palantir uses secure cloud services provided by Amazon, which was sued by IBM over the contract to build those services for the CIA. Jeff Bezos then used that money to buy the Washington Post right as the Snowden revelations were beginning to be published there. The deal was negotiated by George Tenet, the former CIA director who founded In-Q-Tel.

Haresh Patel, a former In-Q-Tel board member also provided some of the key start up capital for PredPol. That is four points of CIA contact in a three product package used all over America to deploy police. These police, racist in their training and composition, generate the reports labeling people, events and even things like graffiti as “gang-related” thus creating the feedback loop that will in turn cause certain areas to be selected for greater police resource allocation.

Combine this feedback loop with the concepts of “community policing” and “broken windows” and add in a helping of powerful police executives and you have a nationwide change in direction of “Its just the way things are done”(TM).

Another of Predpol's principle officers, Chris Kelly worked for the Clinton administration on the community police initiative that put 100,000 more cops on America's streets right as his wife Hillary Clinton was making speeches about black teenagers being “superpredators that must be brought to heel” as dog are brought to heel and made to walk behind lord or lady of the manor who owns the kennels in which they are kept.

So-called community policing, along with it's steroided and data drenched younger sibling predictive policing, grow out of a theory called “broken windows” policing which focuses police resources on so-called quality of life crimes in poor neighborhoods. This approach to policing, with it's obvious racial biases built in, was championed former LAPD head William Bratton.

William Bratton, and the cadre of police chiefs he trained in Boston, New York and Los Angeles were a central force in the formation and growth of a powerful non-profit association of Police Executives called PERF, the Police Executive Research Forum. PERF luminaries include some of the most notorious head crackers in America. Their past and present board composition reads like a who is who of chiefs who have violently suppressed political demonstrations and organized industrial scale human rights violations. PERF members were key to staffing President Obama's 21st century task force on policing and PERF itself was the key organ in the national crackdown on the Occupy Movement. They are also a key endorser of the use of PredPol and Palantir by now over 100 police departments around the country.

Predpol's ideology is hidden, but it's later developments will be even less so. One of the system's key architects, UCLA Professor of Anthropology Jeff Brantingham developed both PredPol and newer technologies and theories with social science grant funding from the Minerva Initiative. The Minerva Initiative was commissioned by former CIA director Robert Gates when he was serving as Secretary of Defense in 2008. The initiative was run jointly by the Pentagon and the National Science Foundation until it became solely funded by the Department of Defense.

It now provides grants to social scientists to predict mass mobilization and political trends and apply that mathematical modeling to both ISIS and so-called “gang activity”. Brantingham is developing new tools of repression currently with a second bite of Minerva's $50 million apple. Brantingham's new approach is to further map gang membership, territory and crimes based on the LAPD's racist and outdated data set.

Taking a step back and looking at the picture we have the most racist and repressive institutions in America applying interdisciplinary top-level science to big sets of biased data in order to deploy repressive force on a block by block level around the country. This effort is long running and has progressed over multiple presidential administrations under both parties.