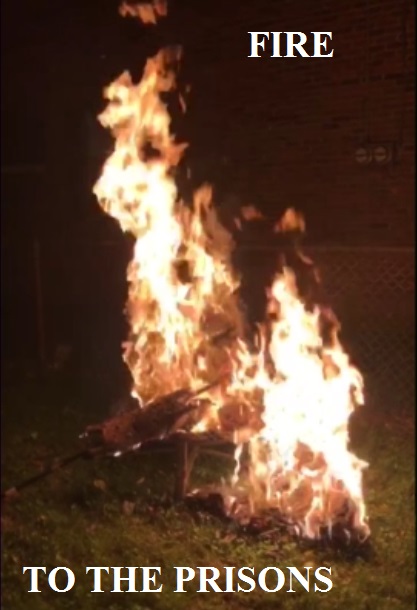 The event was billed as a pig roast against prison slavery and featured a variety of speakers who addressed the very harsh and very real pandemic of constant human rights abuse that is the American prison system. Letters were read from around the country that recounted religious discrimination, overflowing toilets, rat limbs in food, five prisoners in cells designed for two and the widespread brutality of guards that most of this country accepts as normal.

National publications have reported on this wave of strikes, but with the exception of Teen Vogue the coverage has been largely confined to the business press. The Wall Street Journal, Forbes and Business Insider have all run articles in the lead up to the event. It appears that the mouthpieces of Wall Streets are well aware of the huge profits that are made on the back of prison labor for such companies as Columbus local employer Abbot Labs (now a subsidiary of Mylan) and Starbucks, who use prisoners to package their coffee.

None of these publications gave full treatment to the prisoner's actual demands, which will be reprinted below followed by a partial list of institutions that have reported strike actions as of August 28th.

This is a short and partial list of some of the institutions that have reported strike actions:

Prisoner workers at San Quentin in California have gone on strike along with a hunger strike at New Folsom Prison started by Heriberto Garcia on August 21 has grown.

Prisoners in Georgia State Prison "Reidsville" have reported a strike according

Prisoners in the segregation unit at Wabash Valley Correctional in Indiana began a hunger strike on Monday August 27 demanding adequate food and an end to cold temperatures in the unit.

Prisoners at Hyde Correctional Institution in Swanquarter, NC demonstrated in solidarity with the strike. There have been unconfirmed reports of strikes at other institutions across the state.

On August 9, prisoners at Lea County Correctional Facility in Hobbs, NM organized a work stoppage against conditions at the prison, operated by private corporation GEO Group. Tensions at the prison reached a tipping point prior to the date of the strike and prisoners could not wait before initiating their protest. All facilities in New Mexico were placed on lockdown status on the morning of August 20. This statewide lockdown has since been lifted except for Lea County Correctional Facility.

At least two prisoners at Toledo Correctional Institution in Ohio began a hunger strike on August 21. David Easley and James Ward were moved into isolation for participating and authorities have cut off their means of communication to outside contacts.

Texas IWOC was forwarded a message dated 8/23 from inside administrative segregation, (solitary) of a Texas gulf prison confirming that 2 prisoners are on hunger strike in solidarity with the national action: "I feel great. But very hungry! And not because I don't have food but because of our 48 hours solidarity with our brothers and sisters. It's the only way we can show support from inside of Seg. Let everyone know we got their backs." IWOC has confirmed that Robert Uvalle is on hunger strike in solitary at Michael Unit, Anderson County, TX in solidarity with the nationwide strike. Robert has been in solitary for most of his 25 years inside.

In Tacoma, Washington over 200 immigrant detainees at Northwest Detention Center declared a hunger strike on day one of the national prison strike. As of this time, seven continue to refuse food into a second week.

At Burnside County Jail in Halifax prisoners went on strike and issued a protest statement in solidarity with the strike and naming local demands. They went through a lockdown and extensive negotiations with authorities, those who refused to cooperate with humiliating body scans were punished by being locked in a dry cell (no water or working toilets) for three days.