A picture went viral on the internet two days ago on May 27th. It was a shocking picture of a prison bus with car seats for toddlers. It was alleged that the bus was used to transport immigrant children after they were separated from their parents on the direct permanent orders of pro-segregation Attorney General Jeff Sessions. This was part of a developing national story on children being kept in camps, sexually abused by guards, parceled out by the Department of Health and Human services to “sponsors” who have in some cases traffic the children for slave labor and sex and the fact that nearly 1500 children are unaccounted for by the federal government. It turns out the bus was privately owned by a for profit prison corporation, The Geo Group In. (NASDAQ: GEO), through one of it's many sub divisions. GEO has made a huge profit off every aspect of Trump and Session's obsessions with ethnic cleansing. 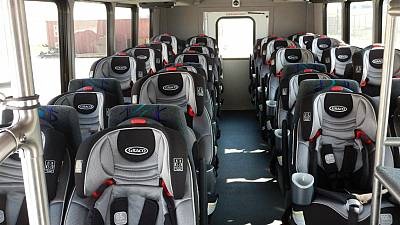 A survey was conducted of federal contracts by the Mockingbird that got all contracts held by GEO and it's subsidiaries going to 2004. This survey was narrowed to all contract payments on contracts current during the Trump administration. A small percentage of these were signed or renewed during the waning days of 2016. Thus the Obama Justice Department's intention to not renew contracts for private prisons was a lie, as we predicted at the time. This slight overlap in administrations by less than 6 months covers the entire Trump era with some of the contracts valid until 2021.

GEO has made $3 billion in less than two years running two private concentration camps as well as running children around the country on prison buses on their way to be released to work on egg farms or be used as sex slaves. While the media and the bi-partisan political elite argue through pundits on TV over which administration is responsible for “loosing” an unknown number of children they have reached consensus on one position. The practice of separating children and parceling them out to unknown places will not be changed by the government any time soon because 2018 is an election year and the Democrats are afraid to offend the racist base of the Republican party by even suggesting a slightly more humane way to run prison camps for children. This was the thrust of the talking heads on CNN forced myself to watch while ordering lunch on Memorial Day.

Meanwhile, that $3 Billion dollars includes as $1 per prisoner per day reimbursement for wages paid to prisoners working in their own camps. A single camp, out of the three that GEO directly runs, made over $76,000 in that way over a year for over 76,000 days of work. The true profit is this, were the prisoners paid minimum wage for an 8 hour day the cost would have been nearly $5 million dollars. That is $15 million of slave labor flowing into the pockets of GEO's share holders every year. There is no budget line for inscribing “Der Arbeit Macht Frei” on the Statue of Liberty but that will likely be done with bi-partisan consensus after the November elections and GEO may well compete against Corrections Corporation of America (NYSE: CCA) for the contract.

Some Progressive researchers have noted the GEO Group's $225,000 worth of donations to the Trump Campaign. Although this is the equivalent of buying him a new solid-gold place setting to with the rest of his golden flatware that he eats pizza and burgers off of, there are other ways for politicians to line their pockets with prison labor profits. GEO is majority owned by institutional investors, meaning hedge funds and banks. Banks donate quite a bit of money.

Two of the largest institutional owners of GEO's private concentration camp empire are JP Morgan and Credit Suisse AG. Both were part of the group that backed the construction of the Dakota Access Pipeline with a revolving credit line and both poured money into the Clinton Campaign and the Clinton Foundation in 2016. No matter who won, children would still have been torn from their parents, taken to private camps, sold in to slavery or sex-trafficking and had the records of their existence burned. Politicians would still have gotten paid.

The only difference is that Trump tweets about it in his underwear.