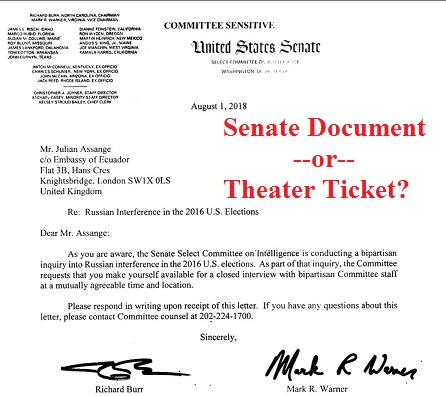 As most readers are aware, Julian Assange has been trapped in the Ecuadorian Embassy in London for over 6 years since being granted political asylum. Were he to leave the Embassy, or more likely be kicked out of the Embassy, he would be arrested on bail jumping charges by UK Authorities stemming from a no longer active warrant from Sweden.

It also clear that there is at least one sealed indictment against him dating back to at least 2012. There is another possible sealed indictment being pursued or that is actually active from 2017 as has been hinted at by Attorney General Jeff Sessions.

Despite Wikileaks as an organization seeking some kind of guarantee, there seems to be no path to Senate Committee getting the closed door testimony short of all fifteen members, plus four ex-officio members (Mitch McConnell, Charles Schummer, John McCain and Jack Reed) going to London and holding the secret meeting inside the Ecuadorian embassy.

Aside from the Embassy being impractically small for 19 Senators plus their aides, committee staff, and Secret Service Protection to hold a proper meeting in, the concept is ludacris from a security perspective. The committee that deals with the most classified information the NSA doesn’t lie to them about to their faces meeting in a foreign embassy itself located in a foreign country behind closed doors with a wanted man. That would trump Trumps behind closed doors meeting with Vladimir Putin last month by double face cards.

The possibility of Assange appearing via teleconference is likely not going to ever be on the table. To keep the connection secure, Ecuador would have to allow American intelligence to install secure equipment in their Embassy. This is not something any country would do. The Ecuadorian embassy has been bugged by United States at least once before during the Assange saga.

The possibility of the meeting becomes even more obviously impossible when one remembers that every Democrat member of the Committee, including war criminal Dianne Feinstein and former prosecutor Kamala Harris is by virtue of their office a member of the Democratic National Committee. The DNC is currently suing Wikileaks and Julian Assange, along with the Russian Federation, The General Staff of the Russian Federation Armed Forces (GRU), “GRU Operative using the pseudonym “Gucciffer 2.0””, Donald Trump, his son, his son in law, his campaign, a bunch of other people with Russian Surnames and “John Does 1-10” for RICO violations and a laundry list of other things including trespass to chattels (because the election is their private property) there is a clear conflict to get testimony from a witness before Congress while suing that same person civilly if they were ever able to appear in court.

The interlocking lines of conflicted interest in this absurdist farce are enough to give a person a headache if it were to mapped on paper. If the Senate Committee is actually serious, they would have to somehow guarantee not to arrest Assange in order to meet him somewhere on American soil and then get UK authorities to let him travel there, regardless if that is the American embassy in London or America proper. The only way Assange could be kept from fleeing to another country that has granted him asylum. or would grant him asylum. is to have him brought to the closed door meeting under guard.

Should Assange arrive at some meeting, any promises made to him by the Senate are not binding on the Department of Justice and thus he could be arrested on the spot or immediately after by the FBI. The mainstream media would likely have a field day speculating and salivating over the various forms of torture Assange might face, as one TIME reporter has already called for him to be murdered by drone. Perhaps the Fox commentators would enjoy seeing the Democratic Committee members as collateral damage.

The point of this pointless letter, after eliminating all the actual permutations of what could happen, is theater. The theater of an unsympathetic hacker trapped in an Embassy refusing to meet in secret to discuss things that never happened. From Congress to Broadway to London the show goes on. 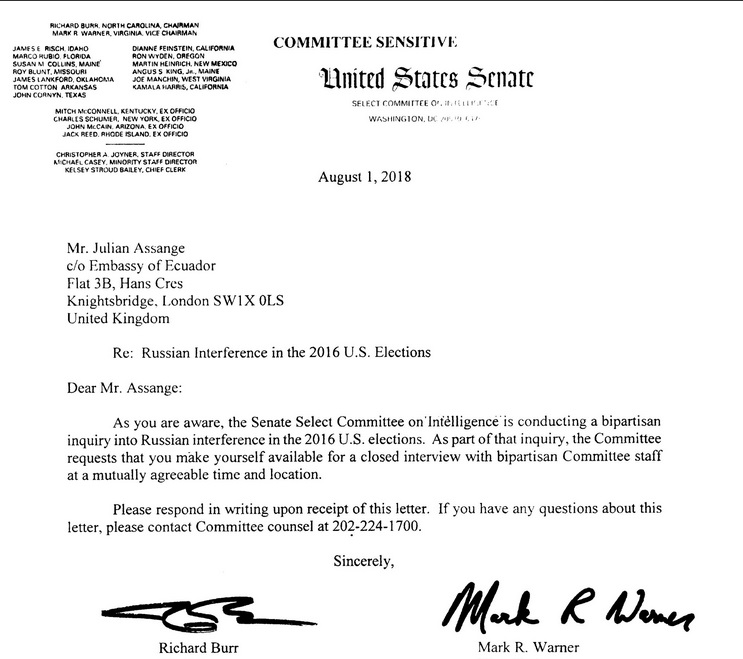