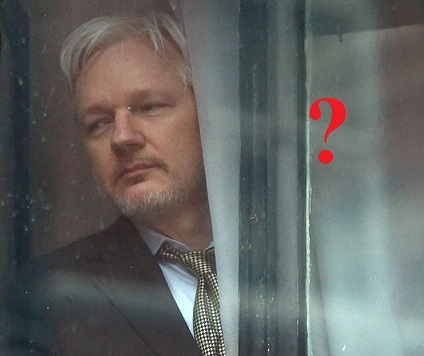 Every question has a short answer and this case is that answer would be “likely yes and probably soon.” Assange faces imminent expulsion from the Ecuadorian embassy in London where he has been cut off from any and all communications for four months. Although charges against him in Sweden have been dropped, he still faces legal repercussions from his journalism in the United States and British authorities have the ability to hold him on rather weak bail jumping charges for seeking asylum from a now no-existent warrant. The complicated legal wrangling involves four countries, the lies of two different administrations in three of them, and the interplay between two of the most powerful intelligence services in the world. That makes the whole story, in a word, complicated.

Assange has been in the Ecuadorian embassy for over six years after seeking political asylum there. He slipped out of house arrest in the UK where he was facing extradition to Sweden on two rape charges, one of which has since been dropped. It is normally very bad form to question rape allegations or victim blame, but noted feminist author Naomi Wolf has raised 8 serious problems in with the prosecution ending with the words Karl Rove in an almost 1800 word article on the subject. The remaining charge against Assange will be active until 2020 when the Swedish statute of limitations runs out. There is no international arrest warrant and thus no extradition order, but Assange could be prosecuted if he were to unwisely return there.

Ecuador has granted Assange asylum, but has repeatedly complained about having what could be the world's worst house guest in their actually small embassy for six years. This has not gone without at least one American journalist calling for a drone strike in downtown London as revenge for Assange's leaks. During the time he has been there, at least one intelligence agency has bugged the embassy, and having the world's most high profile fugitive journalist in the same building as a country's sensitive diplomatic materials is the very definition of a security risk. The current president of Ecuador, Lenin Moreno, has a much less aggressive foreign policy than his predecessor Rafael Correa. It was Correa's administration that granted Assange asylum and Moreno's that imposed his gag order and is poised to evict him to waiting UK authorities specifically for speaking out.

The United Nations has twice condemned Ecuador for silencing Assange just as it condemned the UK for essentially trapping him in the Embassy by placing a 24 hour guard there for years to arrest him on sight if he tried to get to the airport in fly to Ecuador to actual have asylum rather than be a prisoner in the embassy. Moreno was quoted in an interview with the German magazine DW as saying Assange "went beyond the limits of freedom of expression." Assange was specifically forbidden to interfere with the politics of other countries, which the business of investigative reporting invariably does in the course of even the most normal business. In a sense, he was a citizen of Ecuador with no right to speak before he had neither the right nor the ability to do so.

Should Assange be evicted from the embassy, the UK would arrest him. Then the fun would begin and the lies have already gotten thick. The UK foreign minister, Jeremy Hunt, stated on July 21st that he faces “serious charges.” When asked what these charges might be other than evading bail on a now non-existent warrant, reporters were told to look it up. The mainstream press has declined to do so. The Mockingbird does not have to. We have previously done the research and we know the lies.

The United States Department of Justice denies they have a sealed indictment against Assange. This is contradicted by two separate pieces of evidence stemming from two different administrations. Attorney General Jeff Sessions has previously stated the prosecuting Assange “is a priority.” The existence of a sealed indictment, however, goes back to 2011 under the Obama administration. When Stratfor, a private intelligence contractor, was hacked by Jeremy Hammond, their internal emails indicated they knew of or were in even possession of a sealed indictment. This indictment would pre-date the Swedish case, Assange's house arrest and subsequent embassy flight, and all that has happened since. It would also indicate that both the US and the UK governments are being far from truthful.

The cooperation between the two English speaking nations, dating back to the Second World War, is known as the special relationship and coordination between the two nations respective intelligence services as part of the so-called “Five Eyes” agreement. If the CIA or State Department were planning on snatching Assange via extradition or extraordinary rendition, MI6 or the Foreign Office would be happy to help. Assange's fears and messaging have centered on this those fears are not without a firm foundation. Naomi Klein said two words, Karl Rove, and if those two words are combined with a secret sealed indictment from 2011 a clear view into the intelligence underworld emerges.

Meanwhile, the right wing of the Democratic Party as represented by Clinton Loyalists and the Democratic National Committee, is seeking private justice against Assange. While they are busy suing various Russians for something having to do with trolling during the 2016 election, they have named Wikileaks and Assange as defendants for publishing three sets of stolen emails, the DNC emails, the Clinton emails, and the Podesta emails. The suit centers on the proven wrong claim that Russian intelligence services hacked various email accounts and then laundered the data through Wikileaks in order to help Trump. Wikileaks has denied the leaks came from Russia or any state actor. Computer forensic evidence indicates that the hacks were not remote attacks and actually were done by an insider with a thumb drive.

There are of course serious issues of press freedom at play with the DNC allegations. These were raised inside the New York Times legal department and reported on by former CIA agent and whistleblower Ray McGovern but not by the Times itself. The Russian red herring argument has been echoed by Eric Boehlert, a senior writer for Shareblue Media "The DNC's suing WikiLeaks because they're the central player. If it weren't for WikiLeaks essentially conspiring with Russian operatives, this wouldn't have been a story ... they marketed these emails. They were reaching out to the reporters." Al-Jazeera reported the quote, but not the fact Shareblue is a partisan media outlet built by noted political operator David Brock for the express purpose of assisting Hillary Clinton's 2016 presidential bid through using exactly the same media tactics against the Sanders campaign that the Russians are accused of using to help Trump.

Seven administrations. in four countries are wrangling over what to do with Assange's quarters after he is drawn on a the CIA's jet powered hurdle to the Guantanamo scaffold. What is lost in the spectacle is the most important thing, which is not Assange, but the actual content of all the leaks. Not one word of any of them has been denied or contested. That fact is the most telling.