It takes a village to raise a Brock Turner, but Yellow Springs is a village that can do anything 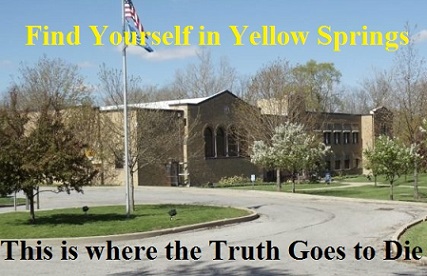 People like Brock Turner can not develop and continue to exist without help from their parents and their parents' connections. This is how he managed to lie to the courts about his very location. Although he is also in the Miami Valley, upper-middle class suburbia would rather not look over the fence and see a mirror, when in reality Yellow Springs has it's own young privileged boy alleged to have raped at least two of his classmates without consequence. It took a village, a school district and a state and county connected prosecutorial machine to keep his future on track. Most of all it took his father's help to protect him and his father's friends to cover it up as best they could.

Noah Krier is a 17 year old Yellow Springs high school student. At least two young women that attend school with him have accused him of sexual assault, with one incident happening in July of 2017 and being reported to the police in September, and the other happening in March 2018. There are rumors of additional incidents and these have not been reported to police. The YSPD recommended a charge of Gross Sexual Imposition in the July incident, yet Noah Krier remained a student. 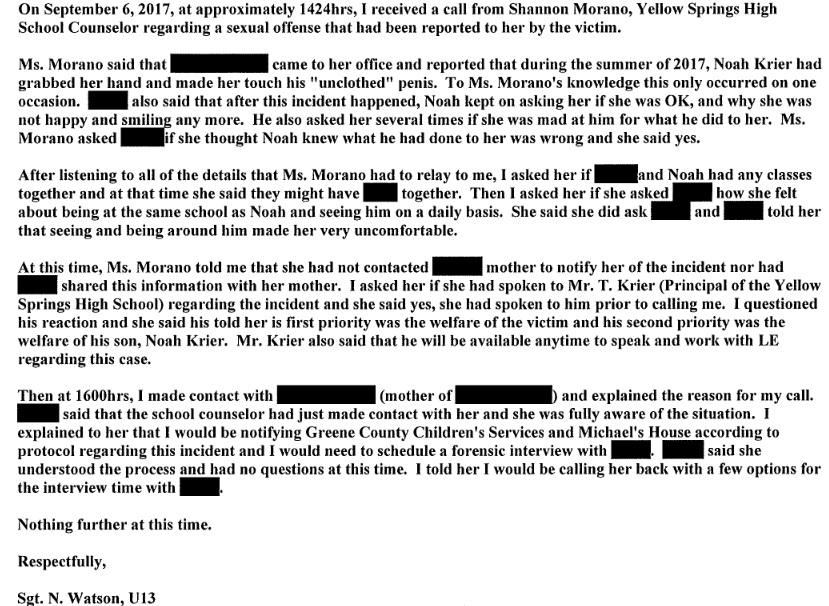 Tim Krier has been the principal of Yellow Springs High School and McKinney School since 2010. He is also Noah's father. Documents show that the school counselor reported the first incident to the police. The police then reported it to Tim Krier, reminding him that his first responsibility is to the safety of the survivor. Tim Krier then immediately informed the police to come to him for help. He immediately put himself in a position to protect his son. At this point the perpetrator's father knew before the survivor's mother. This is after the survivor specifically said she feared bullying and retaliation, as the report shows.

This position is made clear by January emails between two YSPD officers and Krier requesting direct phone calls. The subject and content of these calls are not recorded in any record produced by the Village of Yellow Springs, yet the request for communication, which makes the calls official business, is included at the bottom of this article along with the initial incident narrative by Sgt Naomi Watson. There is nothing on paper to indicate that these calls are in relation to Noah Krier, but there is official law enforcement interest in something with no explanation or documented followup. Huge gaps in YSPD records have already been documented by the Mockingbird. 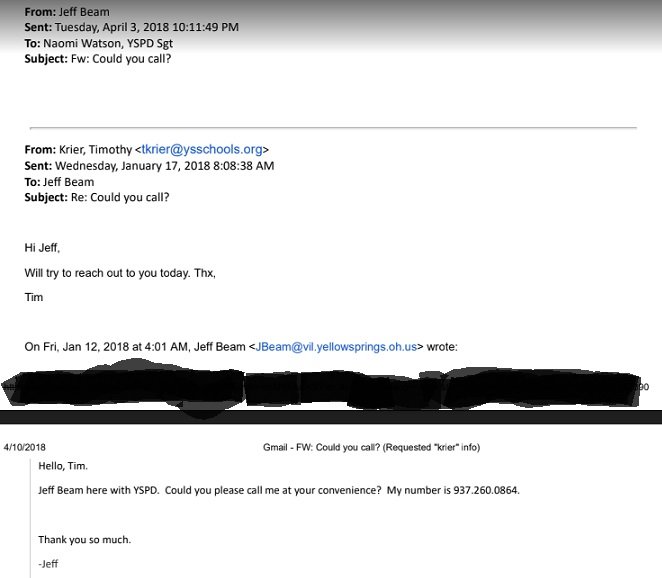 Multiple parents have been interviewed by the Mockingbird, and none wish to go directly on record. All of them confirm that their children have told them about feeling unsafe in school or alone at social events with the younger Krier and know he is protected. The children know and the adults are afraid that those in power will not protect their children from further victimization. The parents have stated they also fear retaliation both socially and from village government directly.

Yellow Springs High School students should be able to go to the police. At least, that is the theory. Yet the designated High School Resource Officer, Dave Meister, was given his posting in February of 2017 and then immediately transferred to the night shift where he would not have any way of actually being contacted directly by students. The structure put in place prior to the reported incidents leads to a single desk that immediately contacts Tim Krier and when that desk recommends charges, even with ample evidence, nothing happens. These January 2018 unrecorded phone calls complete bypass the actual officer who should have been in direct contact.Yellow Springs has a big rug and a big broom to sweep it's big dirt. Our public records requests only went back so far, so as of this writing there is no way to be sure if the YSPD staffing change was preventative.

Another incident occurred in early March of 2018. This lead to Tim Krier being on a paid leave of absence. He is still collecting his $106,000 a year salary. Although charges have been recommended against his son in both instances the Greene County Prosecutor's Office has not filed any. The Yellow Springs News reported two separate incidents after their own records request, and noted that the March incident was “under investigation.” It did not note that charges had been recommended in the previous incident and that the assailant remained a student for the whole year.

The Yellow Springs News has exactly the same ability to get documents as the diligent staff of the Mockingbird. We have no special powers and there have been no leaks. We have done document searches to see who else was investigating this story, and the same access was given to both print and broadcast media outlets in Dayton, Springfield and Xenia. Although we are sure they knew the assailant’s name, and his father's name, they did not use those names as a direct search term. The story came and went without them doing the basics.

The fact that a story was in the offing was officially transmitted to Yellow Springs Schools and by the School system to the parents with the spin of protecting the children from intrusive media. The media never came, and a sigh of relief was undoubtedly breathed in quiet spaces by the village elders. 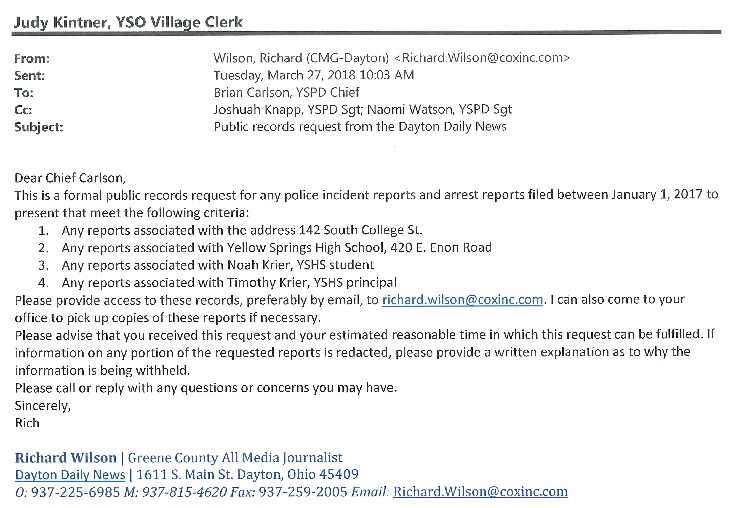 The Village Government, it's police force, the county government, the school system and the guardians of the public in the media have come together to protect a young man from a powerful family while offering children no protection at all. This was done structurally in a way that will allow it to be pawned off with a silent shrug. With a massive school levy up for a vote in the coming month, there are millions in taxpayer debt funded contractor handouts to protect along with the Harvey Weinstein-like antics of Yellow Spring's very own Brock Turner.

YSPD Chief Carlson has stated that this incident will remain under investigation “For a long time.” One wonders if a long time means “until after the levy” or until “after the expiration of Tim Krier's contract in 2019” by which time The elder Krier can move on to a new job and the younger Krier will hide behind sealed juvenille records in some college far far away.

[Mockingbird reporter and researcher Matt Raska contributed many hours of research and dozens of public records requests to this report. We are happy to have him as part of our team.]