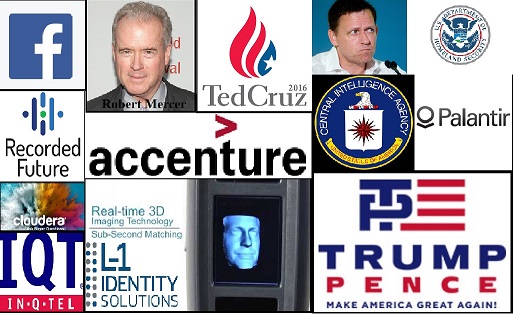 There has been much talk of Russian interference with the 2016 general election in order to put Putin's finger on the scale for Trump. Facebook founder Mark Zuckerberg has been called in front of Congress to answer questions about how Cambridge Analytica got away with mining and using all that data. What the mainstream media, while focusing on Facebook, has failed to amplify is the role of several intelligence community connected firms in the election and what retired spies are involved. Cambridge Analytica did not act alone, they had partners and those partners had connections. Two billionaires and a handful companies are not making the news while Mark Zuckerberg is getting memed all over his own platform. While the internet makes fun of Zuckerberg's face, he sold all our faces to a pack of spies.

Billionaire Breitbart backing Brexit booster Robert Mercer founded Cambridge Analytica and was crucial to it's inclusion in the Trump campaign. Prior to that Cambridge Analytica was backing the Cruz campaign and with them came technology partners. One of those technology partners was Accenture (NYSE: ACN), which also helped Trump. Mercer has a significant stake in Accenture and it's North American CEO, Julie Sweet, is married to Chad Sweet who is the former Deputy Director of the CIA for Operations. The Directorate of Operations is the part of the CIA that carries out the covert actions like election rigging, assassination, and torture. He later became Chief of Staff of the Department of Homeland Security. He left that job to form a business consulting firm with his former boss Michael Chertoff called the Chertoff Group. While there he was also the Chairman of Ted Cruz's 2016 campaign.

When Cambridge Analytica and Accenture moved over to the Trump campaign they were joined by billionaire Peter Thiel and his data analysis firm Palantir. Palantir has been known to spy on activists and provided a key part of the NSA's PRISM system. They company received start up funding from the CIA's private equity firm In-Q-Tel. In-Q-Tel was founded in the 1990s at the orders of then CIA director George Tenet.

Accenture has direct dealings with two other In-Q-Tel funded companies. One, Cloudera provides cloud-based secure storage. The other, Recorded Future, provides real time analysis of social media and has been openly used to target dissidents for doing such subversive things as passing out blankets to the homeless and exposing child abuse.

Accenture also has direct dealings with L-1 Identity Solutions, which makes facial recognition software and is closely linked with Titan L-3 Communications. The latter is a leading manufacturer of police body cameras and one of it's employees raped children in Abu-Gharib. George Tenet sits on the board of L-1 Identity Solutions.

Summing this up, one billionaire owned two companies that massively mined data from facebook during the elections. Those two companies worked with a CIA backed company owned by another right wing billionaire and yet three more companies directly linked to and in two cases financed by the CIA. A chart of these relationships does not make for a good 2D info-graphic.

The amount of influence and direct involvement by the American intelligence community in the Trump campaign makes it hard to understand how Russian intelligence could have penetrated it. Indeed all actual claims of Russian hacking can be sourced to two companies, Crowdstrike and Fireeye, both of which received startup funding from In-Q-Tel.

One of three things is at the bottom of any claims of actual Russian interference in the election. Either it is a badly concocted cover story, a classified operation backfired and is being kept classified to cover up CIA and NSA incompetence, or the entire intelligence community just has it's greatest outright defeat by the Russians since the Cambridge Spy Ring of the 1950s.

What is most likely is that this is all a badly concocted cover story. One thing we can be sure of is that every single selfie harvested by Cambridge Analytica has now been run through analysis and linking provided by Recorded Future and Palantir and everyone's face is now loaded into a recognition database built by L-1 Identity Solutions and controlled by a former director of the CIA. We don't know if Putin gives two shakes of a bears tail what we think, but we can be sure the CIA does and loves having copies of our selfies right next to a catalog of our tweets.

Compound this with Cambridge Analytica being brought in by Mercer to support the Brexit Campaign and you have untold millions of people from multiple countries all in a single biometric database.