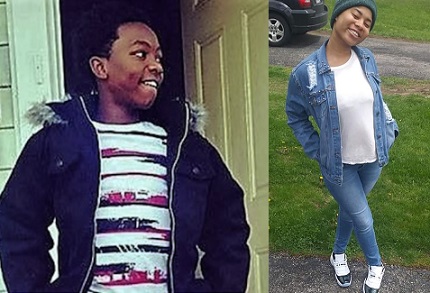 When a teenager dies in a hail of police bullets family and community are traumatized. When that happens in Columbus the teenager is invariably not actually a danger to the police who execute them. After the murder, the City of Columbus is not content to merely smear the victim and hide behind attorneys, the police union, and their badges. There is a developing escalation, where any witnesses and t to the murder and their families are prosecuted. This is what is happening in the wake of the police killings of both Julius Tate Jr. (killed at age 16 on 7th December 2018) and Tyre King (killed at age 13 in September 2016).

Tyre King was executed by police while with four older teenagers. Police claim he was reaching for a non-functional pellet gun in another teens waistband. One of the teens was later charged as an adult with robbery for stealing $10. He is serving a three year sentence. King's family has brought a lawsuit against the city and the badge wearing trigger man. The other three children now aged 15, 16, and 18 have been added to the lawsuit as defendants in a motion brought by the office of Columbus City Attorney Zach Klein. Thus the family is being forced to sue their own witnesses and the parents of Tyre King's friends will have their wages garnished for their entire lives to take part the burden of his wrongful death off the hard pressed backs of Nationwide Insurance (who already receive a massive tax abatement on their real estate) who pays the bill on the rare judgment that happens when a cop shoots a child in Columbus.

Zach Klein is not the only racist lawyer to target witnesses and their families after a police shooting. His move seems to be a one up on County Prosecutor Ron O'Brien, who charged 16 year old Masonique Saunders with the murder of her boyfriend Julius Tate Jr. Saunders was on the scene when the SWAT team shot him in public during a stolen property sting. They claim that Tate intended to rob them for the money that they were going to pay for some item. Although they claim he was armed at the time, Saunders and Tate's family say that the police claim he had was “found” during a search of his home after he was pronounced dead. There is no word if any stolen property was actually recovered. Seven days after interrogating Saunders for hours she was charged with Tate's murder.

Saunders is being tried as an adult and is facing 60 years in prison for murder and robbery (a robbery that lacks a stolen item or a gun). Her family has a gofundme for her legal expenses. Like every cancer patient who is forced to give Nationwide Insurance a premium, her family has no safety net to protect itself. She was charged one day after Tate's family lawyers announced that they had witnesses to contradict the police department's poorly concocted alibi for murder.

The City of Columbus and Franklin County do not bring major legal actions for free. Bringing a felony murder case against Masonique Saunders will cost $50,000 in court costs before her appeals begin. There is little doubt that Ron O'Brien can find himself an all white jury to convict her with. Zach Klein's Amicus brief is like to have cost the same. He also has added the additional labor costs of constructing the defense of his murdering police officers around placing sole liability on the juvenille defendants.

After murdering two teenagers, the local government has already spent $100,000 targeting their friends and families for the crime of telling the truth about what happened in court. They will likely spend another $100,000 on appeals and added trial costs before this is over. This is the racist justice system in it's pure 190 proof undiluted form.

The timing to the two legal maneuvers are clearly designed to send a message from the City to it's black citizens. The message is simple: “If you sue us for murdering your children we will take everything we can from everyone you know.” A single legal maneuver is just an evil legal maneuver. Two legal maneuver is a policy. It is a policy of witness intimidation that has the additional bonus of draining financial and emotional resources out the families when they are already paying to bury their dead and grieving for their loss.

It is also a form of collective community punishment for the crime of being black and valuing your friends and family. Money and time and emotional resources that could be spent on living and growing and thriving are instead spent attempting to defend not just one family but groups of families against completely contrived attacks compound by a racist state on top of racist murder.