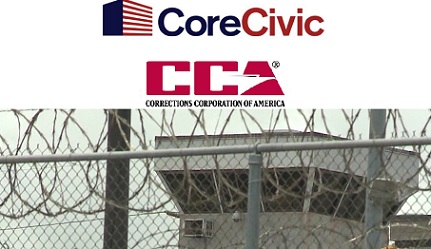 After nearly a month of searching, James Robinson was finally found by his defense committee on Tuesday June 5th. Yesterday, June 7th was the first day he could be visited and a team was on site ready to assess his actual situation and begin the process of getting him a real lawyer. They were turned away without outright lies, again, by the privately employed screws at the North East Ohio Corrections Facility. James Robinson is still being held without contact or even acknowledgment by the federal government, now secretly in a private prison like the ones reserved for immigrant children before America sells them into slavery.

When his team arrived, they were asked who they were there to visit, the Desk Sargent located Robinson's name on a list. His name was highlighted in yellow. She crossed his name off the list and his team was told that he was not in that prison. His location can been confirmed by multiple calls the day before. Obviously his name would not be on a list at the desk, nor highlighted in yellow if he was completely unknown to the prison staff. NOCC is a private prison owned by CoreCivic (NYSE: CXW), formerly known as the Corrections Corporation of America (CCA), the largest private prison corporation in the country and a rival of GEO Inc (NASDAQ: GEO). Between the two they operate 170 private prisons and rake in over $3 billion a year in profits.

After a brief period of questioning by the prison guards, the defense committee was given the choice of leaving the prison grounds or remaining indefinitely. It is not clear why the guards chose to question people about a prisoner that they claimed not to have in custody, demand documents, and demand to examine notes taken during the interview.

At the same time that this was happening, several fake internet accounts began reporting the defense committee's fundraising site for fraud. This brought it down and was the fourth site brought under this kind of attack in two weeks. These persons unknown can be assumed to be working with the federal government to interfere with James Robinson s criminal defense based on both the timing of the attacks and their frequency.

The defense committee has enlisted lawyers and will be attempting to visit Robinson at the prison again on June 9th. Should this visit fail, court action will be brought in federal court within the week. According to two lawyers now working on the case, this is a ground breaking indefinite detention of a US Person on American soil and has not happened in Ohio since General Ambrose Burnside had Clement Vallandigham arrested in 1863. Aside from the 150 year difference, Governor Clement Vallandigham was a racist slavery loving traitor, and James Robinson is a factory worker opposed to police brutality, but times have changed.

Meanwhile, CoreCivic continues to reap a profit from indefinite secret detention of James Robinson and others. The company's human rights record rivals that of Burma. Rather than the phasing out private prisons as was alluded to at the end of the Obama Adminstration and never actually carried out, Trump administration, pleased the $2.7 million a year spent by CXW on lobbying, began renewing their contracts.