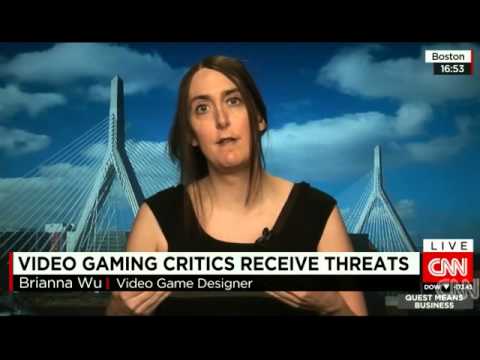 Gamergate is a one of the great oozing pustules of internet culture. It is a campaign of harassment against women gamers, game developers and bloggers born of an attempt to bring so-called journalistic honesty to so-called video game journalism. A brief, incomplete recap of the saga is as follows: A woman who is a video game developer video game journalist left (or cheated on, or slept with, or who cares really? I only slut shame Henry Kissinger) her boyfriend for a video game journalist. The ex-boyfriend was buttsore. He and his friends turned his inability to keep a partner, due either to the underdevelopment of his man parts or his personality (or both), into a faux journalistic scandal. That movement is now a full-fledged hate group.

Money never changed hands and “sexual favors” never translated into positive reviews. That did not matter. Women bloggers and developers, including leading lights of the industry and culture spoke out. That is when the death threats against themselves and their families began.

Gamergate developed into a full fledged anti-woman hate group that has received almost zero attention for their criminal activities from the state. They have at least one active member in Columbus and our local district attorney does not seem to care.

Brianna Wu is an investigative journalist who switched careers to be a developer after marrying her husband, award artist Frank Wu. She has also been an outspoken feminist voice against gamergate, claiming they are “fighting against an apocalyptic future where women are 8 percent of game developers rather than 3 percent.” She has received numerous death threats which she has meticulously documented and turned over to the FBI. The feds seem to be too busy helping the NYPD catalog every Halal eatery in Newark, New Jersey to investigate. She received a death threat from Columbus Ohio which she recorded and published. She publicly implored our local prosecutor Ron O'Brien to act. He has not.

It seems unlikely that O'Brien will act. Unfortunately for Brianna Wu, Ron O'Brien has a habit of targeting investigative reporters, including this one, and of not prosecuting sexual abuse even when that abuse involves children. Many people on the internet have asked “Who will stand with Brianna Wu?” As an investigative reporter I will. I have a professional responsibility to defend my own kind and to name the nature of the malfeasance of those in power. As a journalist who covers human rights, I can, must and will name the guilty. It is dangerous to be a real journalist in America these days without any help from the boys who play too many games.

O'Brien has claimed that Wu never submitted evidence or filed a report. Wu has claimed that one of her employes sent the evidence to City Attorney Rick Pfeiffer. There has been no stated reason by any party involved why Wu's employe was not properly directed by Pfeiffer's office. Pfeiffer has previously bent the law out of shape to keep citizen initiatives off the ballot. He has even gone so far as to order city employees to not count signatures. Trying to file a criminal complaint with Pfeiffer's office will not produce the desired results, as he was at least aware of the attempted cover up of the Columbus Police chronic complainers list.

Had Wu been properly directed to O'Brein's office she would have found a prosecutor unwilling to prosecute the rape of children if those children are not white. O'Brien's office is backed by a police force that kills more citizens than six states combined or eight larger cities combined. Columbus is not a high crime dangerous place.

O'Brien, although unwilling to go after somebody for felony menacing where the evidence is in the public domain and/or within one block of his office at Pfieffer's house of lost paperwork, he is perfectly willing to target journalists and their sources. Last year I covered one of the many cases of gross medical neglect in the Franklin County Jail system. O'Brien, rather than following up to see if prisoners in his jurisdiction were given basic medical treatment, quietly attempted to target myself and my sources. He worked to discover who had given me my information. His efforts seemed to be an attempt to create a climate of fear to protect both the institution, and the Sheriff, who is now hoping to be crowned mayor.

The internet has asked “Who will stand with Brianna Wu?” The government officials of Columbus Ohio will not. They are busy covering up medical neglect on a scale it is actual human rights abuse, protecting child rapists and subverting election law. They don't have the energy or the time to travel to California to snap trophy photos and hi-five her would be murderers. Unfortunately for Brianna and Frank Wu they live in a place where the gun laws are written by a war criminal named Feinstein.

The Wu's may yet come to Columbus. We have many gaming and comic book conventions here. If they need a place to stay, or wish to inform us about their stalkers who are local to us they can contact us securely.

I have a (sometimes) second life as a (sometimes) residential construction contractor. Most of my employes are female. They refer to themselves as the “Amazon Death Squad.” I was discussing this situation with one of them while she was breaking rocks with a sledgehammer. When not rolling her eyes at Gamergate in general she she offered the Wu's a place to stay outside of town. She has kids, a pool, a bunch of land and really nice gun collection. When not building or breaking buildings she teaches self-defense.

This employee/friend, like myself, has been physically fighting bigots in the streets for two decades. Gamergate is neither the first nor the toughest batch of culturally challenged white men we've dealt with. This friend, while cleaning her Mauser, was very excited to hear about Brianna's motorcycle over the phone. Her Mauser hasn't killed a terrified teenager since the Battle of the Marne so Gamergate can drop by if they need an 8mm anti-depressant. Don't count on Ron O'Brien to write the prescription.