Fandom bands together and saves The Expanse, showing grassroots action can reach into space. 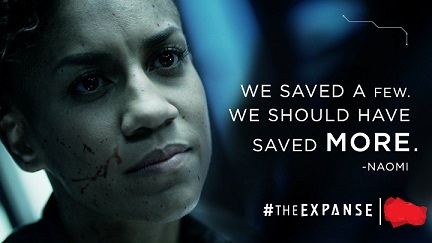 Anyone who reads the Mockingbird regularly knows that that this author, whether writing elsewhere or writing here as editor-in-chief officially doesnt like Jeff Bezos. He is the richest man on Earth and he made a hefty payday off the CIA, which he spent on the Washington Post. The editorial and business policies noticably took a turn for the shady soon thereafter. Jeff Bezos is a fan Tthe Expanse, has read all the books, and directed Amazon to get that show. This was not altruism on his part. This was a sound business decision based on a single fact.

The fact it was based on is the definition of the word fan. Fan is short for fanatic. #Screamingfirehawks, which is what we (yes this author is including himself) call ourselves, are easily the most fanatic science fiction fans to ever fanatic their way across fandom. The Expanse was officially homeless, a show without a network, for two episodes because the fans literally took their fight to save the show into the air, to the airwaves, to cyberspace and to the literal edge of space. 50 years ago the long struggle against NBC's stupid descision to cancel Star Trek eventually spawned the whole fan convention industry. This time it did not take a decade between cancelation and movie resurection because the richest Earth Taker in history can read the writing on already old walls.

Bezos, who competes with Elon Musk for comercial domination of the space industry, saw a good PR vehicle, and snapped it up. The Fans did do an amazing job. Appeals like the video one above appeared in the constructed language of the show, Lang Belta, which already has nearly as many speakers as Klingon and more speakers than Game of Throne's Valaryian or Dothraki. To the credit of the GoT cast, some of it's members are actually nearly fluent in the latter. Fans raised enough money in four hours to have a plane trail a #savetheexpanse banner around Amazon HQ for hours. They collected over 138,000 petition signatures in a week. They spiked the shows ratings by timing their viewing and doubling up or tripling up with a view (or leave the TV on and go out), DVR record and watch, and follow that with a stream.

The greatest achievement was within two weeks taking the fan campaign to literal outer space. Fans managed to get a small plastic model of the iconic ship from the show, the Rocinante, onto a high altitude balloon and photographed with the Earth in the background. That is bigger than moving a mountain.

All of this is incredible. However for this human rights reporter, it is also saddening. I love the Expanse. It is my favorite show. I love grassroots organizing. I was a grassroots organizer and risked my life long before I was a reporter. What saddens me is that the kind of outpouring to save my favorite TV show does not materialize with the effectiveness when real people, like the children in ICE detention, or a man being held incognito somewhere in Ohio, or the people killed in increasing numbers everyday by police are the issue at hand.

I'm not saying that to slag off my fellow screamingfirehawks. They are a few million people out of hundreds of millions in America and billions in the world. They were successful because of a connection to a show with a diverse cast and a humanist message intersected neatly with an opportunity for profit. There is no profit in righting wrongs.

The situation in real America mirrors the life of fictional belters in so many ways. Just as on Ceres water is a commodity worth stealing, “Don’t mess with te Aqua!”, children in Flint Michigan do not have water. Just as Joe Miller might space you for not cleaning air filters, Puerto Rico still does not have power. Just as belters on Tycho station rose up to get air for their children and were killed without mercy, people are gunned down in Gaza, now, today.

As Pirate said in the video above “In Science Fiction we are looking at the future but we are speaking about now.” The sub group that Expanse fans most identify with is belters, that is people born and raised in the asteroid belt, distant space stations, and the moons of Jupiter and Saturn. These are people with a precarious existence on the edge of all human society. I've solicited at least one article from a writer with a masters in Post-Colonial studies on the subject. Most Expanse fans, when working to save the show sasa ke when im say “Milowda gonya leva xox!” Which means We're gonna rise up!

Just as life is harsh in the belt. Life grows more and more precarious for people outside of the imperial metropoles of Earth everyday. This author, whose day job is documenting that precariousness, wishes that certain spirit, a togetherness, and instant inside recognition of “Milowda gonya leva xox!” Would translate from the green screen to his street and streets all over the world.