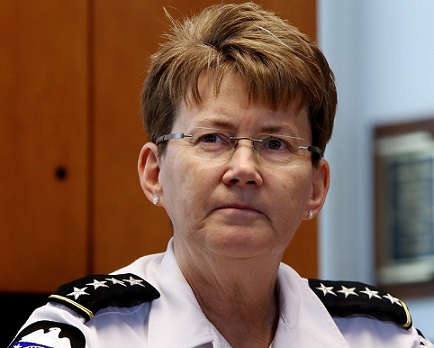 It's been one year since Andrew Mitchell murdered Donna Dalton. He was a Vice officer, working alone, got her in his car, parked it with the passenger side door to a wall and the child safety locks on, and killed her. The Mockingbird has been following this case since the first day. There was police pushback as the family mounted protests demanding justice. The police spokespeople and mouthpieces from the prosecutors office were literally locking their doors and hiding in their offices within two months.

The pressure mounted and eventually, eight months after Donna's murder, Franklin County Prosecutor Ron O'Brien brought the case to a grand jury and halfheartedly secured an indictment. Andrew Mitchell is the only Columbus Police officer to have been charged with a crime for harming a citizen in the over 20 years that O'Brien has sat as gatekeeper to the halls of justice. After that nothing on this case has moved. Mitchell stands charged in state court, and in federal criminal court for shaking down prostitutes for money and sex, but not for murder, robbery, drug conspiracy and money laundering.

Donna Dalton's family took the offensive this past week and on the 23rd of August 2019, exactly one year to the day of her murder filed a wrongful death suit in the Federal Southern District of Ohio. Their suit lists false arrest, wrongful imprisonment, kidnapping, and battery, amongst their causes of action. The one year mark is important as there is a statute of limitations on some of the causes under federal civil rights law.

Reading the lawsuit and the accompanying corner’s report is bound to be chilling. The cause of death was a gunshot wound to the chest. This of course was not the only bullet fired and not the only wound. One bullet struck Dalton in the right shin, exited through her right calf, and re-entered her body through her right thigh, all while she was in the back seat of Mitchell's car. This shows she had her legs up in front of her while cowering in the back seat and begging for her life as the murdering rapist police detective continued to empty his weapon into her without mercy, pity or remorse.

The suit seeks $3.5 million in damages, but according to Dalton's sister, Bobbi McCalla, the recognition of Donna's civil and constitutional rights are the most important. The family is seeking some small affirmation from the government that Donna was indeed a human being and had human rights. The Justice Department's failure to include any reference to Donna while charging Mitchell highlights the need for this redress. The failure of Franklin County to charge him at all until he was already charged at the federal level doubly reinforces this concern.

The suit, in addition to naming Mitchell himself and the Columbus Police Department includes 25 Jane and John Does and former Police Chief Kim Jacobs. The as yet unnamed cops are listed as being a party to the killing both in not controlling Mitchell's use of department equipment while off duty and failing to supervise Mitchel in the years that he had been running his shakedowns, sex trafficking, drug dealing and money laundering, all the while receiving a handsome salary from the taxpayers.

The inclusion of Kim Jacobs is instructive. Her failure to supervise Mitchell either directly or through the chain of command becomes more henious when her role in shaping police policy and practice at the national level is considered. Jacobs is a member of PERF (the Police Executive Research Forum) a national police lobbying group. Because of her work there, she was appointed to President Obama's task force on 21st century policing, which was supposed to help shape policy in the wake of the Ferguson uprising. This of course has only given America more body cameras, which do not lead to more prosecutions just more biometric data being collected.

The Dalton family has taken matters into their own hands. This suit shows and names the fact that every single institution at the local, state and federal level failed Donna Dalton in every way. Elected officials locked their doors and did not communicate with the family until after charges were filed. Even when prosecuting Mitchell, the federal government ignored Donna Dalton as though she never lived, and therefore never died. Had Mitchell not been charged at all, he would have quietly retired to run his drug and sex trafficking empire on March 13th.

It appears justice will only come from people taking a stand directly and persistently.