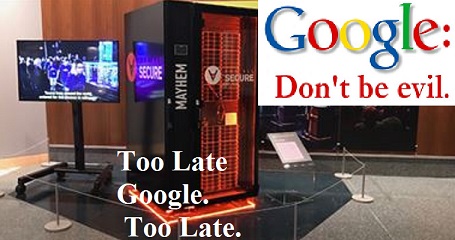 Google loves to tout it's “Don’t Be Evil” motto. Which is why it got itself into an internal revolt this week when 3,100 employees signed a letter to it's CEO Sundar Pichai objecting to Google's participation in Project Maven, which is an AI program using recognition software applied to surveillance footage for the Department of Defense. Google is of course ducking any responsibility by claiming the capability will not be used directly for weapons targeting just for “intelligence.” The engineers objecting saw this coming and had already included the “what will it be used for later?” argument in their initial appeal.

The whole flap smells of political theater if one looks at the actual goals, time-line and staffing of Project Maven and sees that the project is neither news, nor is it likely to be Google's first use of drones and AI for the military intelligence complex. The letter invoked Google's don't be evil motto but the demon left the pentagram years ago and Project Maven has been in operation for nearly a year.

What is Project Maven?

Project Maven is an attempt by the Department of Defense's to integrate Artificial Intelligence and machine learning into actual combat environments. The memo establishing Maven, AKA the Center for Algorithmic Warfare, is included at the at the bottom of this article. It answers directly to the Under Secretary of Defense for Intelligence.

The goal of Maven, according to reporting by the Bulletin of Atomic Scientist in December of 2017, “focuses on analysis of full-motion video data from tactical aerial drone platforms such as the ScanEagle and medium-altitude platforms such as the MQ-1C Gray Eagle and the MQ-9 Reaper.” In other words, it is already interfaced with systems that put missiles through school windows every day.

From April to December 2017 success was achieved by partnering Maven and Google with in Defense Information Unit Experimental, “an organization set up to accelerate the department’s adoption of commercial technologies.”

The sum of this is that in a few months a commercial product was adapted to use on a military platform with not directly lethal results, for now. The technology is being used to essentially rewind terabytes of stored video to see who might have placed a roadside bomb and follow them home.

The technology and it's application

The actual technical framework being used is called TensorFlow, which has been a released Google product since 2015. TensorFlow is an open software library that operates on other software sets including Google's image pattern processing software called Deep Dream.

Searching large data sets from drone surveillance is an outgrowth of those already realized software packages.

What has not been said

April inception to December press releases shows a mature that required adaptation and crew training. This means that Google has applied this machine learning technology to other image problems and has already streamlined it's corporate structure to integrate it's existing technology to defense and intelligence problems. In short the Department of Defense knew who to call and what they had on the shelf.

Press reports confirm that the Department of Defense knew, and knew what they wanted to image processing software for. The head of the Maven is Jack Shanahan (Lt. General USAF) who previously “served as the Commander of the Service Cryptologic Component. In this capacity he was responsible to the Director, National Security Agency, and Chief, Central Security Service, as the Air Force's sole authority for matters involving the conduct of cryptologic activities, including the spectrum of missions directly related to both tactical warfighting and national-level operations.” according to his official military biography. He serves as director of Maven and that is a step more down than sideways from his previous postings unless Maven is a new iteration of something already made.

Because of the focus of the results of their machine learning projects Google has internal and external plausible deniability. However all this technology was ready to go at a moment’s notice and therefore Google had some data set to test and develop it on. Considering the DoD's foreknowledge of what they wanted to buy and the background of Shanahan in the NSA, the finger does not point at the Moon but at the Loon.

Google's project Loon is a concept to use balloons in the stratosphere to deliver internet connectivity. It can also be used for surveillance along with an imaging technology called Kestrel. The same company that makes Google's Loon balloons also makes Kestrel balloons for the military and border patrol.

What Google is hiding from the public and their employees is that this surveillance technology is not a potential weaponization of machine learning but a further weaponization. It's too late for Google to don't be evil, they are pretty much caught.