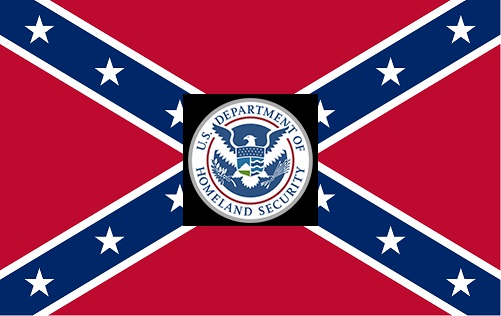 When a systematic case of a hate group taking over the entire apparatus of a state's law enforcement happens one would think mainstream media outlets would be equipped with intelligent questions. When this is impossible without federal collusion and top secret security clearances, one expects many intelligent questions.

When the mainstream media outlet is the Washington Post however, the questions are vetted by the intelligence community, and have been for nearly three years. This resulted in a revolting downplay of systematic racism in Alabama's law enforcement and criminal justice system. At a bare minimum they are no longer the investigative powerhouse that brought down Nixon.

The story began when a small investigative publication called the Henry Report released a story detailing the planting of evidence by white police officers on black defendants that resulted in over 1000 wrongful convictions between 1996 and 1999. This story went viral.  [Note: The Henry Report has a new website since they released this story: http://henryreport.com/]

The story documents collusion by the police officers' superiors and the district attorney, Doug Valeska. The story further shows the officers in question posing with a confederate flag and claims that the officers are all members of the Sons of Confederate Veterans. The SOCV has been characterized as alternately as a “racial extremist”, “Neo-Confederate”, or “white supremacist” group.

The group calls itself a “Southern Heritage” organization while claiming that the civil rights movement was a Jewish conspiracy. However they describe themselves, a bunch of white policemen posing with a Confederate flag in Alabama can safely be called white supremacist.

Racist policemen are a part of this story that is not in dispute. The Washington Posts blogger on “criminal justice, the drug war and civil liberties,” Radley Balko, cites facts supporting a racist justice system in the area, including all-white juries, defense attorneys that always advise plea bargains, and Doug Valeska getting overturned on appeal for illegal evidence.

Balko then attacks the central argument of the original reporting because the original reporter will not turn over 800 pages of additional documents to him, a self-described blogger at a competing publication. He dismissively waved away his initial support for the story claiming that it would harm efforts for justice. “If these new allegations don’t ultimately check out, it will be that much more difficult to get anyone to take those other problems seriously.” He was happy to get the overturned DA's one word quote of “lies.” but he did not check out the available documents himself. I did however, and the one I could check out is both valid and absolutely damning.

Included in the initial report were one page of results of a polygraph examination of one of the accused evidence planting police officers. At the top of that single piece of paper was the tech support number for the manufacturer of the polygraph machine. I called it to get help reading the results.

Who I got on the phone was the inventor of the machine and founder of the company, Bruce White of Axciton systems. Bruce answered my questions with the precision of someone who was on witness stand not the phone. I think he spends more time on the former than the latter.

The chart pointed out a high amount of deception on the part of officer Michael Magrino when asked specifically about both himself and other officers planting evidence or using drugs. White informed me even a .99% chance of deception, which was overall indicated, is not enough without a confession. When informed that Magrino had been fired he stated “I would consider that a confession.” When asked about other reporters, White claimed to have no recollection of any recent contact with the Washington Post.

Magrino's specific deception regarding the planting of evidence throws all his cases into doubt. It also throws into doubt the cases of other officers. All other documents released by the original reporter are internal police memos with redacted names calling Magrino's history into question. Both the department and the Valeska have a duty to report this to the Department of Justice. They did not. The truth of the story hinges on a single document. That document is valid according to the man who built the machine that produced it.

The claim questioning the validity of over 1000 convictions is valid. There is a strong vested interest in keeping those men in prison. The prison system in Alabama is run on a for profit basis. A prisoner's rights group the Free Alabama Movement, is working to end this and other inhumane conditions in the Alabama prison system. Their book, program and website state

“the State and the ADOC are profiting hundreds of millions of dollars off over the approximately10,000 free labors who report to work each day inside of their prisons, to jobs in the kitchen, maintenance, runners, road squads, laundry, libraries and gyms, to stores and sandwich shops, yard crews, infirmaries and dorm cleaners etc. And still millions more off of the work releases and corrections industries. And, the State is collecting all of this money, in all manner of ways --from court costs, living expenses and deduction at work releases, to pennies on the dollar (from a min. of .17¢ to a Max. of .71¢) in wages at industry jobs”

In short, one tenth of the slave labor running the entire prison system of Alabama has been provided by a small team of policemen who are members of a white supremacist organization through rigged trials and planted evidence. The Washington Post could have verified this with a single phone call. Instead they brushed it under the rug.

Where are they now?

Despite other (white) law enforcement officers coming forward, blowing the whistle and demanding a Department of Justice investigation over 15 years ago, nothing has happened. The rest of the white supremacist goon squad has had nowhere to go but up. Then Lt. Steve Parish is now Chief of Police in Dothan Alabama. He has confirmed his membership in the SOCV to his local paper “My ancestors fought for the South during the Civil War, and I’m proud of it.”

His then Deputy, Sgt. Andy Hughes, is the current Assistant Director of Homeland Security for the State of Alabama. He can not have that job without security clearance. Any background check on Andy Hughes would have produced a picture of him and his Neo-Confederate police comrades posing with a Confederate Flag. A minimum job requirement for a high ranking position in Homeland Security should be knowing the flag of the homeland one is securing.

This open racist has demonstrated his allegiance to a nation that ceased to exist after loosing a war it started with the country he is supposed to defend. That is open treason, yet somehow the DOJ missed it long before the Washington Post brushed it under the rug.

The consequences of Andy Hughes having access to the interior workings of the most classified part of Alabama's State Law Enforcement Agency are potentially catastrophic. As the assistant director Hughes has access to the disaster, defense and counter terrorist plans for the Port of Mobile, NASA's Marshall Space Flight Center, U.S. Army's Redstone Arsenal which houses the Missile Defense Agency, and four nuclear power plants. He also has access to all law enforcement communications, internal memos, and investigations in the state. This includes oversight of the very prisons he help fill with planted evidence to advance his career to this point.

Balko's brief biography mentions his book “Rise of the Warrior Cop: The Militarization of America's Police Forces.” It seems to this reporter that he missed a chance to investigate a warrior cop with access to missiles and nuclear materials. That warrior cop, at a bare minimum, is connected to one cop fired for planting evidence and a known racist organization. One phone call and a different investigative outlook would have changed the very nature of his story.

Should additional evidence be released, we will verify and cover it. Should anyone in power choose to act on this information that is already in their hands we will report those actions.

[Editor's note: We were contacted today by the Henry Report and additional information will be released to us for verification and follow up. This is a developing saga and there will be additional reporting]

[Editor's note #2: To the Guy in Fulton County Georgia who tried to break into the website at 11:45pm.. stop it. just stop. you are embarrassing yourself as bad as the last guy who tried. You are doing it the same way with even greater ineptitude ]