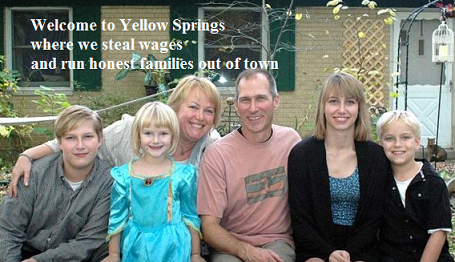 As part of our ongoing coverage of the Yellow Springs police department, Mockingbird reporter Matt Raska wrote an article detailing a pattern of theft within the YSPD of government funds. Our team went through hundreds of pages of documents, reviewed every pay stub, cross checked every training record and found that exactly two Yellow Springs police officers are not party to this criminal activity. Both of those officers, Dennis Nipper and Dave Meister, have been or are currently under investigation by their own department.

Nipper, a part time officer, was refereed to the state bureau of criminal investigation (BCCI) last year, and their wide ranging background check into his entire career, including a phone interrogation of this reporter in December of 2016, found no wrongdoing. Now the John Bryan crime family has set it sites on the only full time officer who does not benefit from defrauding the Ohio Peace Officers Training Association (OPTA) and has actually had his wages stolen. A letter, circulated within at least one church, has garnered community support for Officer Meister.

The Mockingbird received return phone calls from two prominent members of the Yellow Springs Community who expressed their concern about the heavy handed discipline meted out to Officer Meister for the horrific crime of traffic stop leniency. Meister has refused to agree to last chance probation, a demotion, and orders that he can no longer train to continue his maintain his certification as an EMT and a Firefighter with Miami Township Fire Rescue. The John Bryan crime family is not satisfied with simply stealing from his paycheck, but also wishes to preclude him earning money in any other way or even volunteering to save lives as a first responder during his non-work hours.

The letter that circulated soft-sold the retaliation Meister faces, but still residents expressed concern and support for him. Former Village Councilwoman Katherine Van der Heiden said that she was “concerned and I don't understand it.” Van der Heiden echoed many Villagers praise for Officer Meister's character “I think he is a really great guy with a lot of integrity and compassion and he does what is right.” [Editor's disclosure: This author ran against Van der Heiden for village council in 2009. We both lost. Van der Heiden needed to be reminded that we were opposing candidates during the telephone interview.]

Van der Heiden was not alone in returning interview requests. Mike Tripplet, a long time Yellow Springs resident, told the Mockingbird that people are supportive of Officer Meister “we are concerned because we don’t want to loose Dave. He is the most well liked police officer in the village. He is a wonderful police officer, a wonderful firefighter and a wonderful Dad.”

Tripplet has known Meister for years since he “first met Dave as a volunteer for the fire department where he was a mentor for both my daughters.” Meister received an award for putting his EMT training to work saving the lives of two drowning victims in a pond two years ago. Apparently the John Bryan crime family does want Dave to be mentoring other first responders or saving lives. They want him to sit there and have his wages stolen as part of the their money laundering scheme until the dispose of him and leave him unemployed and his family homeless.

Multiple sources within village government have reported overhearing tirades by both Village Manager Patti Bates and senior YSPD officers regarding “leakers” and “snitches” who may be whistleblowers. Perhaps they fear that Officer Meister may testify should anyone be brought to trial for their ongoing criminal enterprise. Perhaps this is a preemptive strike to frighten others into silence or to impugn Meister's character. The Department was more than happy to high five themselves collectively when Meister single handedly foiled a bankrobbery apprehending three armed suspects while the rest of them were off duty.

Only one member of the justice system task force, Judith Hempfling, responded to the Mockingbird's request for comment on the evidence of theft. Hempfling stated that she would be on vacation for two weeks. Village Manager Patti Bates also declined to respond, stating that she was “reviewing the files” and “would get back to” us eventually.

How in depth Bates' investigation will be is not clear. As of now, the Village has spent more labor hours investigating it's own officers for bogus rumors and leniency than it has spent investigating sexual assault in the school system. The priorities of Village government could not be more clear. Meister intends to contest this heavy handed discipline and has retained counsel to do so in court if needed.