Puzzling Timesheets and the YSPD: Fraud? This writer attended Greenon High School and fondly remembers sitting in Advanced Government 101, learning about the federal, state, and local levels of government. He knew all the townships, villages, and cities of Clark County. He learned everything about the executive, legislative, and judicial branches.

The writer also remembers his government teacher being arrested for embezzling tens of thousands of dollars and later pleading guilty.[1][2]

Truly, she taught everything there was to know about the government: Preach how the state works for the people, then make the state and the people work for the preachers.

After examining timesheets and pay stubs (pictured above), reimbursement forms, org charts, and emails from the Yellow Springs Police Department and Ohio Police Officer’s Training Academy, a pattern of corruption begins to appear.

It’s not obvious at first, as many sources need stringing together. There is a pattern of the Yellow Springs Police Department defrauding the Attorney General’s office, usurping or abandoning authority, and playing a shell game with the payroll.

What parts of the Ohio Revised Code could this defrauding of the Attorney General’s office and potential robbery of the people of the village of Yellow Springs be breaking? A brief survey shows the following as potential candidates:

In 2017, there were ten individuals for whom Attorney General Mike DeWine’s office reimbursed the YSPD, each for a total of 36 hours.[7] 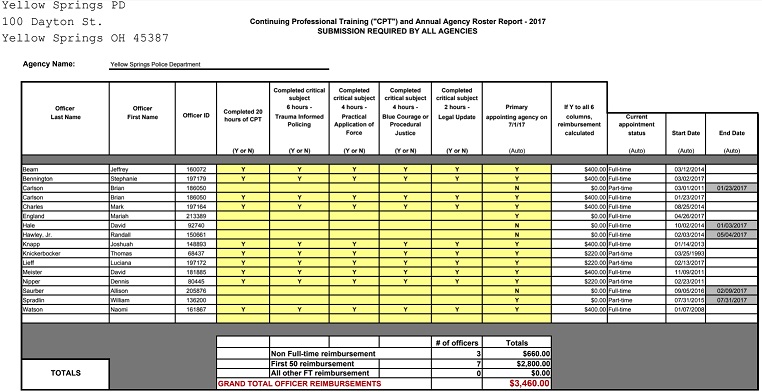 Ofc. Knickerbocker’s did not work any hours for the YSPD in 2017 and as of 5-25-2018 has not worked at all.[8] This is the same Thomas Lee Knickerbocker who is president of Knickerbocker pools.[9] From the YSPD records, he is unlikely to be a qualified police officer--yet he is able to carry a gun, make arrests, and kill with the same legal protections of a police officer. His personnel file does not contain a single certification.[10][11]

Officer Nipper has either 12 or 14 training hours, depending on whether you look at time sheets or pay stubs.[15] He has also been training through the year.[16]

Bennington also has a plethora of training.[17] However, Ofc. Bennington has a grand total of zero training hours listed on her time sheets[18] or pay stubs.[19]

Are these officers training for free? If not, they are being paid out of the general fund.

One of them is not being paid at all.

Within the Attestation of Requestor, reimbursement pay is explicitly only to be used to pay the costs of Continued Professional Training programs. 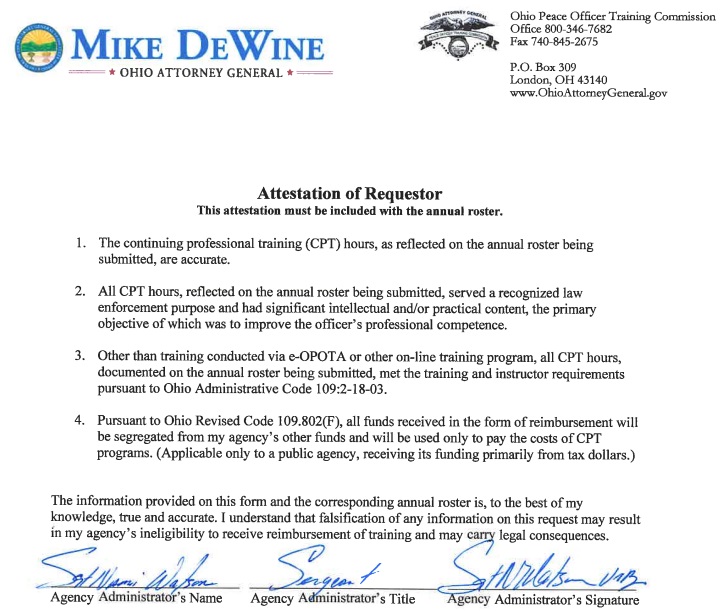 Instead of segregating the regular and training time accurately, the Yellow Springs Police Department has lumped regular time in with training time for Bennington, Nipper, and Lieff. At the same time, the YSPD is defrauding the state for the costs of Knickerbocker’s training which he was never paid for which likely never happened. Only the two instances of training in 2017 are recorded, none of them are the OPOTA courses.

With certainty, bullet points #1 and #4 of the attestation of Requestor were violated by Sgt. Watson who signs most of the time sheets and would therefore be most familiar with who has how much training.[20]

How can this be done without Chief Carlson’s knowledge? Possibly because Chief Carlson is not really in charge of the police department.

The Attestation of Requestor signed by Sgt. Watson as “Agency Administrator” must have been signed after July 1st, as indicated by the “Primary appointing agency on 7-1-2017” column.

This took place at least two months after Chief Carlson was appointed to the position permanently on June 6th[21] and half a year after being named interim Police Chief. 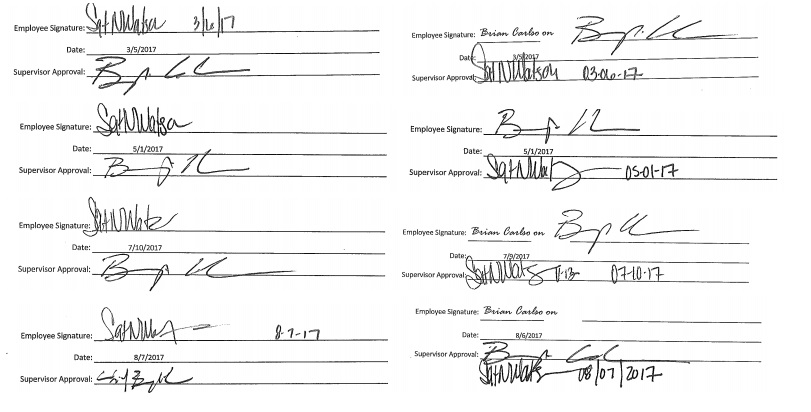 Is there any guarantee that the timesheets are accurate? The two highest ranking officers in the YSPD account only to each other. They are not accountable to the presumed structure of the village. 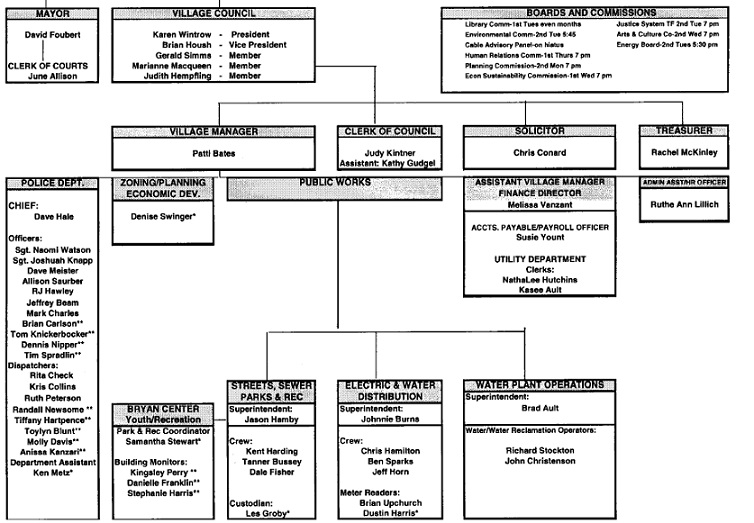 Who is the most involved? It seems to be Carlson and Watson. Between a subordinate and a superior trading off signing each other’s time sheets, who can really know where or when either of them were?

What is is at stake? The money of the village. “Public Safety” is the single largest item in the general fund. It is almost 44% of the village budget. [26]

The money is obviously going to the police department. The amount of money is unknown. This is unlikely to be the only instance of corruption.

Looking further at the time sheets, Officer Beam and Officer Meister appear to have been underpaid for thousands of dollars worth of overtime and training hours while Officer Charles appears to have been overpaid. 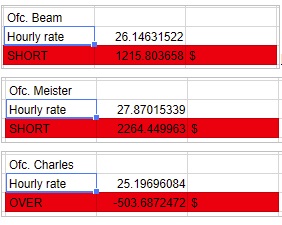 The author is not a professional accountant, but the numbers don’t seem to add up. Please check the data for yourself.[31]

How long has this been happening? Knickerbocker has been on the YSPD since 1993. Does he even know about this deception? The Mockingbird has analyzed only one year of data.

How many years has this fraud been repeated? This writer would wager that the deception has been happening for years but that has become much more obvious recently. Carlson went from being a part-time officer to a full-time chief. He is a prime candidate for manipulation.[32]

Why has this been happening? Because Sgt. Watson is the sottocapo within the Yellow Springs Police Department and Chief Carlson is her willing public relations avatar.

Ironically, it is Knickerbocker’s personnel file that contains a (blurry) message on how to report corruption. 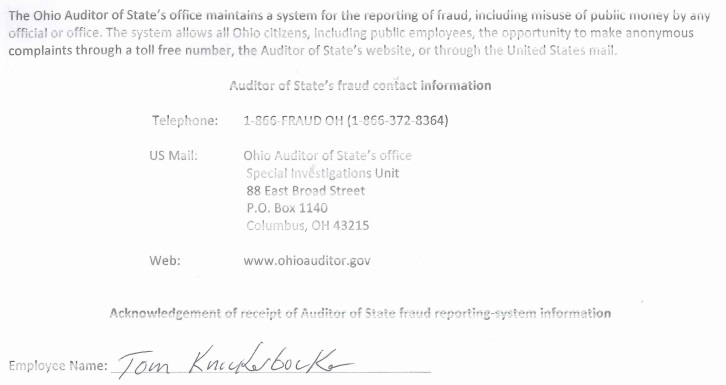 Carlson’s one-year review is coming up. I wonder if Watson or Bates will be reviewing him?[33]

[1]“Former clerk to serve a year in theft case” by Matt Sanctis, 6-24-2013, https://www.springfieldnewssun.com/news/local/former-clerk-serve-year-th...

[2] “State investigators analyzed the village computer. According to the affidavit, in their opinion, “a manipulation was done on this computer that enabled the user to create two separate set of records. It is the opinion of BCI&I agents that had this only been a mistake, it would have been caught as the records would not balance out.”” “Former Enon treasurer pleads guilty to theft in office” 6-3-2013, https://www.springfieldnewssun.com/news/former-enon-treasurer-pleads-gui...

[11] It should be noted that Ofc. Knickerbocker is a part-time officer.

[26] Why is this village so expensive? Surely the police department contributes to the high cost of living.

[32] “Still, some Village employees have concerns that the department won’t choose the most qualified candidates for the positions. Often in the past, in the absence of upper level officers, the department has relied on seniority to define the chain of command below the chief. But when Chief Pettiford was out due to injury beginning in February, he and Curliss named as acting chief the second most senior officer who had for several years been the department’s representative to the Greene County ACE Task Force in Xenia. Several employees questioned the wisdom of that decision, given the acting chief’s limited experience and training in staff supervision, as well as a recent lack of experience on road duty in the village. The move was further questioned after the handling of a police incident that occurred in the spring under the acting chief.” “A mixed first year for Yellow Springs Police Chief” by Lauren Heaton, 11-28-2013, https://ysnews.com/news/2013/11/a-mixed-first-year-for-yellow-springs-po...

[33] All material for this article may be viewed here, under the “YSPD Time Sheets” folder, https://drive.google.com/open?id=0B8rzCeCzEPkvZ1JtUUV6aXRmSUU