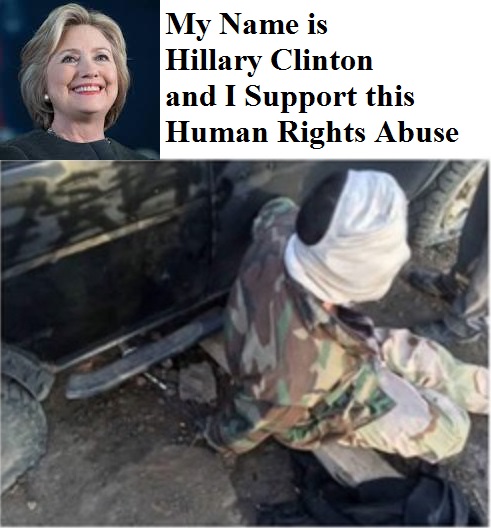 The Clinton campaign issued a terse but seemingly evenly w orded statement ordering Native People and their allies to cease effective resistance as the human rights abuses carried out by the Morton County Sheriffs Department in North Dakota Escalate. The Morton County Sheriff's department is currently supported by the Hennepin County Sherrif's Department of Minneapolis and 19 other agencies under the overall command of the North Dakota Tactical Operations Center. This center, which brings State Police and National Guard elements into play does not seem to be in control of private security guards hired by the pipeline project itself. At least one of these mercenaries entered private land far from the protest armed and masked.

The Clinton Campaign Statement was delivered yesterday, October 28, by Clinton advisor Charles Galbraith. Galbraith is a former Deputy US Attorney, a position he received as a reward for his loyal service to then Senator Obama's first presidential election campaign. He moved quickly up the ladder to work inside the White House as Deputy Associate Counsel for Presidential Personnel in the White House where he conducted interviews, background investigations and political vetting of individuals under consideration for presidential appointments.

“We received a letter today from representatives of the tribes protesting the construction of the Dakota Access Pipeline. From the beginning of this campaign, Secretary Clinton has been clear that she thinks all voices should be heard and all views considered in federal infrastructure projects. Now, all of the parties involved—including the federal government, the pipeline company and contractors, the state of North Dakota, and the tribes—need to find a path forward that serves the broadest public interest. As that happens, it's important that on the ground in North Dakota, everyone respects demonstrators' rights to protest peacefully, and workers' rights to do their jobs safely.”

In short the “path forward that serves the broadest public interest” is continued construction. The Statement listed the interests of the tribes last behind the “federal government, the pipeline company and contractors, the state of North Dakota” The pipeline will bring fracked oil from the Bakken Shale play to a terminal on the Missouri River for further shipment and refining. Hillary Clinton has repeated demonstrated support from Hydrualic Fracking, which is an enviromentally dangerous practice that causes radioactive waste dumping, fires in rural drinking water wells and earthquakes.

“ As that happens, it's important that on the ground in North Dakota, everyone respects demonstrators' rights to protest peacefully”

It is clear that “everyone” does not respect demonstrators rights. The Morton County Sheriff's office chained arrested demonstrators and covered their heads, in a scene reminiscent of Abu-Gharrib. They were so proud of their torture they tweeted the pictures until the images were captured. One of the deleted tweets was made public: 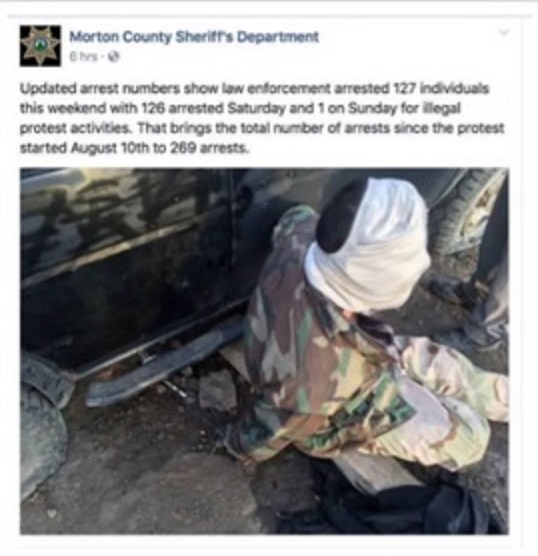 In addition to hooding, which is a violation of the UN human rights charter and US law, protestors were kept in dog kennels in a scene reminiscent of the military prison at Guantanamo Bay. As reported by the LA Times “Protesters said that those arrested in the confrontation had numbers written on their arms and were housed in what appeared to be dog kennels, without bedding or furniture. Others said advancing officers sprayed mace and pelted them with rubber bullets.” One protestor compared the practice to concentration camps, which Hitler consciously and directly modeled on American treatment of Native People.

The rubber bullets, which are never supposed to be fired at head height left appalling wounds: 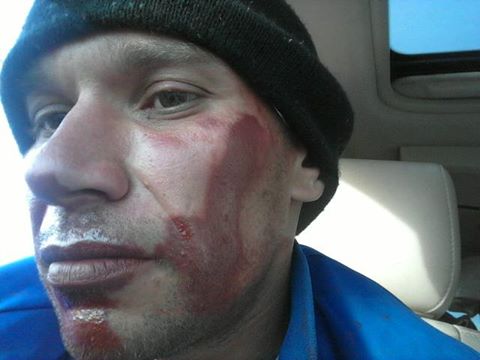 Protestors were also wounded by shrapnel from stun grenades thrown indiscriminately into the crowd. As protest medical staff, clearly marked with red crosses were singled out of arrests and beatings. 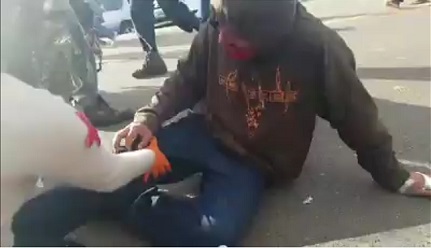 Meanwhile, the Morton County Sheriff's department claime that “shots were fired” in two seperate incidents, including one where a woman fired three shots at officers, missing every time. Video of this elderly woman's arrest clearly contradicts this as she can be clearly seen clinging to a prayer staff while being beaten by multiple members of the Hennepin County Sheriff's Department.

Meanwhile in the other incident, a DAPL hired private mercenary entered private property on the reservation outside of the pipeline construction area armed and masked. He was removed and the people who removed him were arrested, but not before pictures could be smuggled out. These pictures lead to his identification. 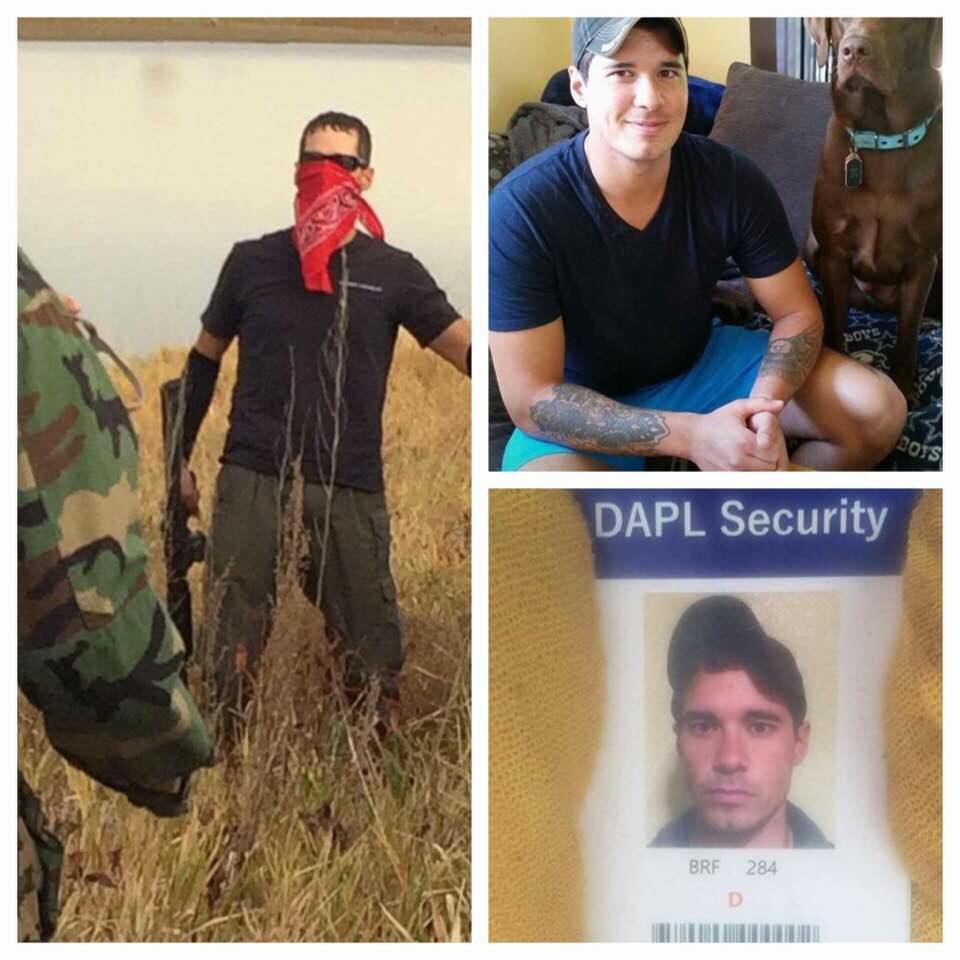 It is clear from the silence, followed by the terse press statement, that Hillary Clinton supports this “Federal infrastructure project” even though it is privately owned. She also clearly supports the human rights abuses that are needed to ram it through.

Federal Support for the attack on protestors also came from the Obama administration’s FAA, which granted a no-fly zone to prevent drones from filming the attacks. Drones have been shot down previously during the heavy military build up for the attack over the last week. Clinton seems poised to continue Obama's “most transparent administration ever,” which promised to close Guantanamo Bay within 100 days of taking office. 104 days from the end of that administration, Guantanamo has moved from Cuba to North Dakota as the mainstream press and the banks cheer. 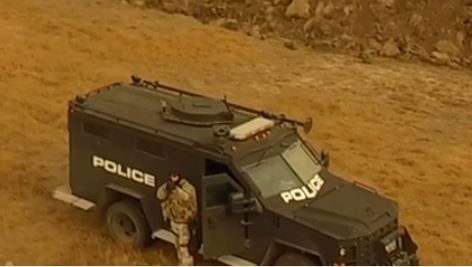