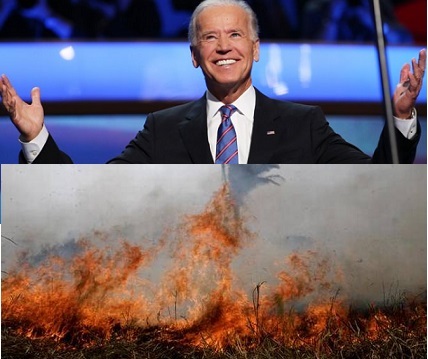 Censoring the entire government on the topic of climate change is one of the hallmarks of the Trump administration. It is also something that creepy Uncle Joe Biden can reach across the aisle and make a bipartisan hair sniff and handshake over. Yesterday, August 25th, Trump snubbed the rest of the G-7 by not attending the attending the climate change session of the conference. Just four days before, the Democratic National Committee voted to snub the American public by not allowing climate change to enter into the Democratic debates. This vote was lead by Biden's surrogates on the committee and the motion carried 227-157 which is a 9% margin.

What this means is that any candidate that refers to climate change or it's recent effects like massive glacier melting in Greenland or the burning of the Amazon or the floods this spring in the American Midwest, can not mention another candidates position or interests on the penalty of being banned from future debates. 227 people who run the Democratic Party have just decided what is allowed to be discussed in public. Biden just censored the debates.

Biden has made some vague mumblings about “better regulation” on environmental issues while saying nothing about fracking. Near simultaneously he endorsed so-called clean coal in an effort to win over some of Trump's base of racists and religious bigots while ignoring the literate majority of the country. The pundit cycle was somewhat distracted at the time of by his wife's gaffe of “just swallow a little and vote for my husband.” One wonders if she has gone senile and thinks she is married to Bill Clinton.

Biden, with the help of the DNC machine, has built a team that spills over with oil interests. His “informal adviser”, Heather Zichal, served as Deputy Assistant to the President for Energy and Climate Change from 2009-2013. While she was in government service she met with Cheniere Energy (NYSE: LNG), a liquid natural gas export company, multiple times and helped them to secure the first export license for liquid natural gas granted in over 50 years. She was then promoted to also the board of Cheniere Energy, a liquid natural gas export company, where she earned over $1.1 million from 2014-2018. Her linkedin profile does not include her board membership or connections to Biden, just he government service and “environmental” lobbying activities.

Cheniere Energy provides the liquification and export terminal facilities for fracking projects near Corpus Christi Texas that extract oil and natural gas from the Eagle Ford Shale Play extending from Dallas nearly all the way to the terminals on the Gulf. Exploitation of this geological horizon is impossible without fracking.

Biden himself was America's fracking ambassador to Eastern Europe during his tenure as Vice President. He made several trips to the Ukraine in order to promote fracking there. This was in America's strategic interest as natural gas produced via fracking in the Ukraine would reduce Europe's dependence on Russian natural gas exports.

This was done at the same time that Heather Zichal was switching over from advising the president to reaping profits from her board membership. Interestingly, this would have also been the same time that neo-nazi Matt Gebert got his job without a real background check into the State Department's Department of Energy Resources in 2013. Gebert had previously studied abroad in both Russia and the Ukraine as an undergraduate at American University and would have been essential to both the groundwork and followup on the then Vice-President's trips.

All of this can be discussed here at the Mockingbird, but steps have been taken to not discuss this at the debates. No candidate can refer to Biden's cozy relationship a natural gas export company, his history as a fracking for export advocate or the hollow environmental policy he has put forward, which is basically a return to Obama era regulations. Obama era regulations, which do not protect the public from direct corporate governance by oil companies are fine with the Democratic party and their leadership does not want it debated in front of a live audience on television.

When America swallows Biden, they will swallow all that flows from him, which seems to be a lot oil, gas and derivative chemicals produced by DuPount in his home state of Delaware.