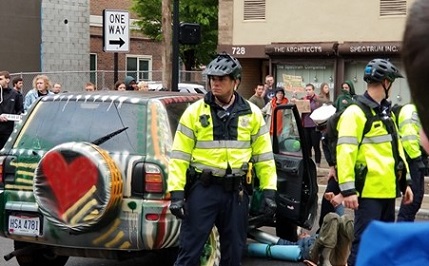 The protest during gallery hop on May 4th was a great many things. It was energetic. It was determined. It was fairly restrained on the part of everyone but the police and a lone lunatic in a track suit and a MAGA hat stumbling around raving about America being great. What it was not, legally or in reality, was a riot. Yet four, and exactly four, demonstrators were charged in order to make it a riot. On top of the usual pepper-spraying of the nonthreatening and defenseless, four people received inconceivably large charges as yet another ham fisted act of repression from the machine that is the City Of Columbus.

The protest, demanding the release of Masonique Saunders, began with a few speeches in Goodale Park. The judicial act of charging Saunders, now age 17, with the murder of her own unarmed boyfriend Julius Tate after he was gunned down without provocation during a botched sting operation by the door kickers of Columbus SWAT. This is part of a new City and County policy of targeting witnesses to police abuse with repercussions for coming forward during wrongful death suits brought by the families of children who have been gunned down.

The protest marched out of the park and down Buttles on the sidewalk with a police car in traffic 2 cars ahead. When the procession reached High Street a brightly painted older SUV stopped and one person got out and locked their own arm inside a pipe that had been welded to the undercarriage. The keys disappeared and the SUV was disabled with a total of three people remaining with the car. Police immediately pepper sprayed all three. Two of the three were secured to the vehicle and unable to comply with police orders.

Enraged police officers then turned their bulk pepper spray on the crowd, failing to fire at the last moment when they realized that it was full of wealthy people in suits for Gallery Hop. About 30 crowd control officers arrived via bicycle and another 15 arrived later on foot and kept the intersection clear for three blocks in each direction.

EMS and Fire Services arrived about 30 minutes later. The pepper-sprayed protestors were not treated or even allowed or able to wipe the mace from their faces. It was clear from the officers' attitudes that only a mass of camera phones was preventing a very brutal beating.

Instead three of them, Kaiya Gordon, Lainie Rini, and Margie Sarsfield, were charged with Riot, Possession of Criminal Tools, and Misconduct During an Emergency. They were separately charged with the traffic offense of Failure to Comply, a statute normally only invoked criminally.

A fourth person, Jenny Boedecker, was picked off by police alone a few blocks away. She was also charged with Riot. The pretext was manufactured with a total of four traffic charges including the aforementioned Failure to Comply along with illegal U-Turns and a broken reflector on her bicycle. In other words, they grabbed her as though she were driving a car for a broken taillight and charged her with Riot and one other criminal charge. The Riot charge is telling.

Under Ohio law, three people being “disorderly” somehow is just three people being disorderly. Four disorderly people is a riot. Plenty of packs of four or more people are very disorderly in public with or without booze when there are sporting events of significance happening. Yuppies from Delaware never seem to get charged with riot stumbling around rowdy and swearing after Crew, Jackets, Buckeye or Clippers games.

This makes it clear that the arrest of Boedecker was a contrivance to punish the group as a whole with more serious charges. This was done in conjunction with driving the arrestees around from 8:30 until after midnight so they would not be book or charged until the next day and thus could be held in jail a whole extra day without arraignment or bail.

The total jail time faced by the three arrested at the scene is 18 months in county jail if the sentences run consecutively as they seem to be designed to do by staggering them between criminal and traffic court. Boedecker faces one year. That five and half years of total threatened jail time on trumped up charges for what was little more than a lunch counter sit in with a side order of engineering.  Without the Riot charge and criminal tools they are looking at a maximum of 30 days for essentially jaywalking at best.

Clearly City Prosecutor Zach Klien (whose office will handle these charges) and County Prosecutor Ron O'Brien (who wants to send a 17 year old girl to prison until she is dead or 82 years old) want to intimidate anyone who speaks out about the county wide death squad that calls itself the Columbus Police Department. A GoFundme page for bail and legal expenses has already been mysteriously taken down once, likely due to interference from either the police or the prosecutors. Should additional fundraising be announced it will be posted here until the police attack that too.

Update: 5/7 - Police have worked with gofundme to shut down both the account for Masonique Saunders and for the four defendants in this article. A new crowd funding page has been set up here.