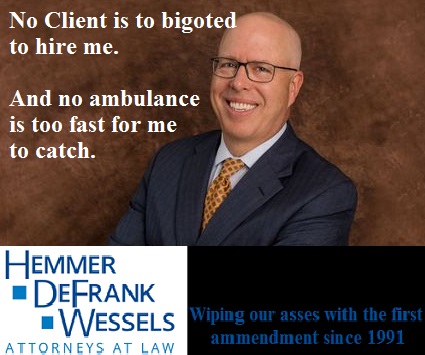 On Friday February 1st, the attorneys in the service of the parents of the micro-bigot so-called MAGA hat kid Nick Sandman announced their intention to sue The New York Times, GQ Magazine, Heavy.com, HBO, The Atlantic, and a total of 50 reporters and news outlets over their coverage of the young Catholic bigot's confrontation with Native Elder Nathan Phillips in Washington DC last month. The list includes Presidential hopeful Senator Elizabeth Warren alongside Hollywood celebrities Alyssa Milano and Jim Carrey.

The Fort Mitchel, Kentucky based firm of Hemmer Defrank Wessels, which practices in Kentucky, Ohio, Indiana and New York, has tasked an eight lawyer team lead by Cincinnati-based Todd McMurty. Although this move appears to be an obvious partisan comic tragedy in the making, the hands behind it and the mode of execution are intended to directly stifle the public dialogue.

In an interview with the Cincinnati Enquirer McMurty was quick with the implied threats "They know they crossed the line," McMurty said. "Do they want 12 people in Kentucky to decide their fate? I don't think so." The threat is not against just the news organizations or the reporters, but also against their sources. This is happening in tandem with a national campaign level PR firm providing so-called crisis management for free or at a discount.

A noted libel attorney, L. Lin Wood of Atlanta, is assisting McMurty. Wood is known for seeking hundreds of millions of dollars in damages from the targets of his libel suits, which have included CBS, the Atlanta Journal Constitution, and the Washington Post. The latter is one of the news outlets targeted in this operation.

Far from being a David and Goliath story, this wholesale attack on public dialogue about racism now has Sandmann's mother (a Fidelity Bank Executive) along with a top-notch PR firm that is intimately connected with Senate Majority Leader Mitch McConnell, and at least nine lawyers from two firms in three states carrying it out. This is the establishment defending it's right to public racist attacks through silencing the press through lawsuits and controlling the press through PR.

The letters, which announce an intent to launch the suits, demand document preservation of materials related to any stories about Nick Sandmann. This demand includes correspondence with editors, drafts, staff memos and “document fragments.” The structure of this demand is designed to make the news reporting process impossible by going after sources as well as placing a huge burden on the IT department of any targeted organization. Fighting against these suits will be insanely expensive.

The first effect is that any source with any video or eyewitness accounts of Sandmann and the Covington Catholic High School Klavern's day long parade of racist acts would now be in the hands of people with a proven pattern of retaliation. This will have a chilling effect on anyone who witnesses racist acts and wishes to speak out. The Sandmann family and their racist supporters in the Republican party apparatus are now directly attacking both the press and the public.

The second effect is how the letters of document preservation as written will cripple the IT infrastructure of any media outlet the is targeted. The demand for document fragments in this is key. For instance, the word processing program on a Windows machine that I am using will create a temporary file for this very document while I have it open. It does this for document recovery and the temporary file will eventually be deleted. What deleted means unless I have performed a military grade wipe of the free space on my hard drive is that the references to the document in the file system have been removed. The actual contents are available to be overwritten by other file as the operating system sees fit, but they are still there until overwritten at random.

Thus if I were to be served with such a letter, I would have to immediately stop using my hard drive and preserve it. That means take it out of my computer and put it on a shelf and get a new one. I could fetch other documents from backups and rebuild a clone of it, but that will take time. I am an experienced computer professional and this is what we in the business refer to as a “great big pain in the ass”. Other people are not as instantly adaptable. If such a thing were to happen to the Washington Post, every computer that accessed any email account that ever contained an email about this issue would have to be so treated. With the editorial workflow I have seen at major publications, that can mean dozens of computers and thus dozens of management level people legally unable to work until this could be done. This can represent quite a deal of lost productivity.

If I were a source and I was so treated. The letter essentially reads “Go out and buy a new computer because the one you are using may belong to us.”

All of the space on these hard drives must be check forensically. This means that a bounty hunting right wing law firm would have access to all the files, including browsing history, including those deleted cookies, and including emails that do not concern them. They might only be able to even mention the relevant parts of it in public or court, but now Mitch McConnell's pet PR firm has access to reporters browsing history and can threaten to leak it if some future interview does not go the way they demand it be scripted.

The Mockingbird has prevailed in one frivolous defamation type lawsuit already and did so with a resounding win. We have not been targeted by this one. Should we be added, as the list of targeted has numerous numbered Jane and John Does, we will fight. The inclusion of the Jane and John Does is to stifle anyone writing about this in ways that do not flatter the Sandmann family. Since the attack is on the public, and on the institution of a free press, we would welcome a chance to defend ourselves for saying that Nick Sandmann is a racist larvae (that's spelled MAGAt rather than maggot) who is on track to being an important drone in the racist hive.