A recent article about neo-nazi activity in the OSU campus area has given the Mockingbird, and myself personally, a chance to earn to that public trust. The article, concerning the not proud enough to sign their swaztika fliers “Proud Boys”, elicited our first actual cease and desist letter, which is included for reader download at the bottom of this article. Their demands, in short, are (1) Make the article go away (2) Don't write about us again (3) Gimme $10,000. The answer is going to be No. No. And No.

Later today, or tomorrow, September 15th, if I feel like it, the following letter will be sent officially as a response. Our dedicated readers should have a chance to enjoy it long before it arrives in Texas officially. Should Mr. Jason L. Van Dyke wish to evade service of a registered letter, this article constitutes the publishing of an open letter in a newspaper for him to enjoy. It is clear from his actions that Mr. Van Dyke monitors this publication as well as any internet address associated with this author, as will also be outlined in a letter.

For the Enjoyment of the reader and the edification of the Proud Boys, the letter begins now:

Through our statutory agent we received your letter dated the 5th of September 2017. We have read your objections to our work, and your demands to cease and desist. After that we had a long hardy belly laugh. The letter has been shown to attorneys with which we have an ongoing relationship and specialize in free speech law. They suggested that I not pay them until you actually bring suit as they are fully confident I can handle you and this action without much help from them. Just so you know, I have a 1000% batting average when appearing Pro-Se in federal labor court, State Court in Ohio and State Court in Texas as both plaintiff and defendant, both civil and criminal.

Since you are alleging Libel, please do realize that we are familiar with the relevant case law. That would be New York Times V. Sullivan and derivative cases under federal, Texas and Ohio law. Since you claim to be “associating with attorneys in Ohio” I can assume that you are still confused about venue, and can not decide if you are going to bring your so-called action in the Northern District of Texas, the Southern District of Ohio, or the State Courts of either Texas or Ohio. Are you shopping based on case law or based on judges?

Perhaps your threat is to sue Mockingbird Publishing and myself twice, once in State Court in Texas. It is not clear what exactly you intend to do other than silence the free press and collect a hefty payday. Neither of those things will ever happen.

One of the your core allegations is that the so-called Proud Boys are not Neo-Nazis. What you failed to disclose is that you are a “Proud Boy” yourself, of the third degree, or at least that you claim to be so on your Facebook profile. A screenshot of said profile is included below. Are you under contract with the Proud Boys? Are you acting as their in house counsel? 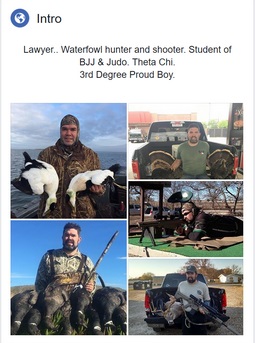 You claim to be representing or finding representation for Proud Boys in Ohio. Proud Boys, as a legal entity, as opposed to an informal association, do not exist in Ohio. Persons claiming membership have committed various acts of low grade intimidation here, but they have not filed any paperwork with the Secretary of State's office. You are threatening a lawsuit in one, possibly two venues for a client that has no corporate existence in “association with” lawyers you do not care to name. Sir, you are a lawyer demanding monetary damages for articles written in another state where you are not admitted to the bar on behalf of a group of anonymous clients that have no way of retaining you. For that, you get nothing but a copy of this letter sent to the Texas bar association.

I can only assume that your basis for any action would be your own personal affiliation with The Dallas Fort Worth Chapter (assuming you joined the closest one to you). This personal affiliation of yours is an element of proof that the Proud Boys are in fact neo-nazis. You sir, are a nazi. This makes your clients, when they are your close political affiliates, nazis as well.

Basic research noted your 2000 arrest and conviction on weapons charges and domestic violence. At that time your were in possession a of the Turner Diaries, a neo-nazi semi-fictional terrorist manual. You also had a copy of the Protocols of the Elders of Zion, a classic of anti-Semitic forgery. The former book was written by the late William Pierce, the former head of the National Alliance. That man was an unapologetic and self-described Hitlerian. There is a direct line from you through him to George Lincoln Rockwell, who actually wore swastika armbands. You were also a member of the Council of Conservative Citizens, which is a known white supremacist organization, albeit one lacking the more traditional robes and / or jackboots uniforms.

I also noted a post regarding the repeal of certain firearms laws, on the neo-nazi website Stormfront, by a profile called WNLaw. I assume the WN stands for White Nationalist as opposed to" What Now?" This appears to be you. Is this you? Are you rambling on about some ill-conceived petition drive so you can legally have guns on a neo-nazi website while claiming that you and your friends are not neo-nazis? Did I get that right? I'm just doing my due diligence here... since you seem to insist.

Your claims in short are without merit. Since this letter may well be evidence some day I will spare the judge and the jury more colorful language describing the deficit of merit your claims, and you as a human being, seem to lack.

I am going to assume that the letter should be delivered to 108 Durrango Drive as it is on your letterhead as your office. That is a lovely home that doubles as your office. I see that you and your father teamed up to buy that nice little foreclosure and benefit somehow from the sub-prime mortgage crisis in 2011. I guess bottom feeding runs in your family.

I welcome your suit should you be foolish enough to file it. I am prepared, and so are a number of firms who would be pleased to represent me against you. Both my friendship, and your buffoonery, have motivated their requests for participation. I personally do not take well to threats. Threatening me is like attempting coitus with a garbage disposal. It is pointless, painful, and makes you look more ridiculous on the internet than you already were.

Should you bring your suit it will be noted that I do have a cause of action against you as well, along with your anonymous clients. Your post to my recent gofundme fundraiser was proximate to so-called “shitposting” by people I can only assume are also Proud Boys in good standing. The one who said he would sooner “slam his dick in a car door while leaving the keys in the house” then purchase my latest book was a real winner.

You, and your neo-nazi associates directly interfered with my business under the guise of political opposition. Since your goal was the shutdown of a press organization we will not dignify your conduct with the term “free speech.”

The threats and the harassment will cease now. There will be no further contact from you.

Publisher and Editor in Chief

[Editors Note  11/19/2017]:  Jason Lee Van Dyke has denied his afformention convictions on charges of domestic violence and the weapons charge.  He claims the weapons charge was expunged in 2006.  Research by volunteers has not been able to determine the status of these cases or convictions.  The State of Michigan has laws that allow misdemeanor convictions to be set aside in some circumstances if the offendor is under 21 at the time of the crime.  Under the provisions of this law a person could answer truthfully that they have not been convicted of the crime in federal court.  We have been unable to determine if Mr Van Dyke used this law in this case.  Should he have he would not be under disability and therefore permitted to own firearms.  Records searchs performed by a legal professional in Michigan produced inconclusive results.  Short of a midnight trip to the basement of the Ingham County courthouse we have no way to be certain at this time. Mr. Van Dyke, in addition to being authorized to practice law in Texas is also authorized to practice in Georgia, Colorado and the District of Columbia  Lawyers often do select courts based on tactical considerations. It is not unlawful just one of those dirty things we hate lawyers for]