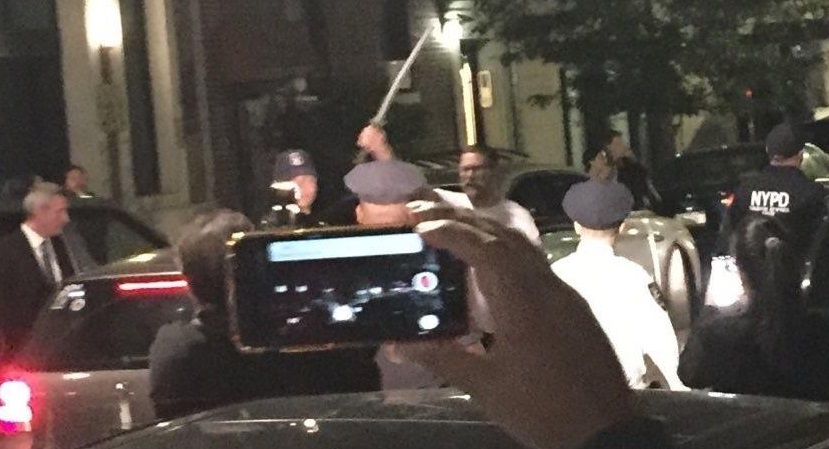 Because it was not enough, or perhaps because of the thrusting sword he drew on the street during a riot he instigated in New York is actually of Japanese design, he is suing the Southern Poverty Law Center (SPLC) for calling him something other than what he wants to be called and for terming the Proud Boys a violent hate group.

The Proud Boys are only violent on occasions when they outnumber the people they are attacking, as they were when nine of them attacked three anti-fascists after Mcinnes's speech at the New York Republican club. The aftermath can be seen above with the NYPD completely forgetting that fixed bladed weapons longer than four inches are illegal in New York State.

The Proud Boys suing because they don't like being called what they are is not something new. One of their prominent former members, Jason Lee Van Dyke (not to be confused with the racist murdering Chicago Police officer Jason Van Dyke), sued this publication in late 2017 for calling him a Nazi. It began with legal harassment about a story. Our response telling him where to stick it to himself, just like his boss did on camera, caused him to sue. The meat of his complaint was that the Proud Boys are “Western Chauvinists.” This is exactly what his leader is doing now to someone else.

When Van Dyke met with real legal challenge in federal rather than state court and failed to read Texas's strong anti-SLAPP (Strategic Lawsuit Against Public Participation) statue, he backed down and the case was dismissed with prejudice. In his correspondence to the Mockingbird's Attorney, Randal Kallinen, he intimated that he had be instructed to do so by his employers. I believed then and will assert now that this meant Gavin Mcinnes.

The Mockingbird was to be a test case. They are asserting more and more loudly that they are not a hate group and with some success. The FBI, who never saw a civil rights worker whose murder investigation they couldn't botch, walked back from it's earlier assessment “We do not intend and did not intend to designate the group as extremist,.’’ This is what the FBI has said about a violent gang that jumps members in, brandishes swords on the street and is allied with every other white supremacist organization in the country.

The SPLC has been known to “educate” the FBI, under contract for large helpings of milk from the taxpayers breasts, about hate groups. Perhaps this is where the FBI got the “Black Identity Extremist” are a terrorist threat notion from, as the phrase has appeared in SPLC publications for years. It is hard to know if the tail is shaking the mongrel or is the cur simply enthusiastic.

The SPLC, despite being founded by former advertising executive and direct mail marketing pioneer Morris Dees, may actually have less money then former Vice Magazine head Gavin Mcinnes. It might be in their best interest to pay him off and let it go. It is now police shorthand for “anti-police brutality activist”.

This may in fact be Mcinnes's strategy. The final target of his lawsuit driven self- rehabilitation campaign are major social media and tech companies that have banned him for being a hatemonger. That would include Youtube, Twitter, Amazon, Facebook and Paypal. This is about the business of being an internet nazi, and how Gavin Mcinnes can have access to markets for his ideas and to fund raise for his race war.

He will contend that it is a culture war. This is another syntax based argument that nazis use to disarm liberal centrists, who never looked right without shaking hands and never looked left without punching. This lawsuit was announced Monday, exactly one business day after the parents of MAGA hat kid Nick Sandmann sued 50 press outlets and reporters for not writing their stories about him as dictated by Mitch McConnell's campaign staff.

The proximity of both events in time and character show that all this legal action is about control of the public dialogue. The old maxim that the right wing believes in free speech until it has power is ringing true again, with a pair of shinny new lawsuits in a single week.