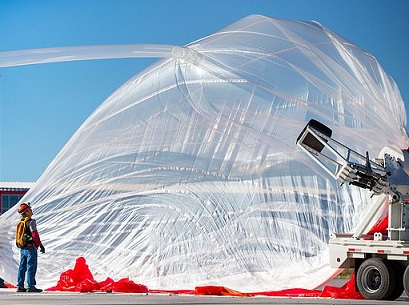 On August 5th, the Guardian.UK ran a story about surveillance balloons being “tested” over Minnesota, Wisconsin, Missouri, South Dakota, Nebraska and Illinois for later use by ICE. In reality there was very little to test as the surveillance balloon and it's equipment are mature technologies already in use.

The mention of states, as opposed to cities, like St Louis, Omaha, Minneapolis, Milwaukee and Chicago, serves to refocus the conversation to the South when two of those five cities are within the 100-mile border zone in which nobody has any constitutional rights when ICE is involved.

The actual balloons are made by Raven Aerostar, a South Dakota company that branched out from making hot air balloons to work on Google's loon project, which is internet and voice surveillance re-branded as connectivity. The company also manufactures the Kestrel balloon surveillance platform, which uses tethered mini blimps to help US forces find school children for artillery strikes in Afghanistan.

There have been cameras mounted on balloons before but this actual surveillance apparatus is code named GORGON STARE. Manufactured by the Sierra Nevada Corporation, it consists of 386 5 mega pixel cameras each with a telephoto lens. When deployed on MQ-9 Reaper drones, the array can provide constant near video surveillance of 100 square kilometers. The Reaper drones have an operational service ceiling of 25,000 feet while the balloon system has a 50-70,000 foot operational altitude. Because area is a quadratic rather than linear function, that means it can broadly watch an area three times the size of Minnesota and zoom in for any details as the operator wants.

Regardless of the balloon's actual position with respect to the Earth's surface, a altitude of over 10 miles gives line of sight advantages that normally only satellites can achieve. GORGON STARE is a military system desgined for war in Iraq and Afghanistan. It is being tested on the Midwest. It will be deployed to the border.

Watching the border, where it can see every single migrant child die of thirst in the desert while trying to avoid dying in America's concentration camps, it can also look backwards into America with it's omnidirectional camera array. Hovering near Tuscon it can 500 miles beyond San Deigo, which is beyond the maritime boundary of the United States. It can also read a license plate in downtown Denver.

The systems are realitively cheap, and can be kept airborne for days. They can adjust altitude in order to maintain station by rising or falling to make use of the wind direction and speed. Realitive few of these balloons can watch all of the United States and nearly 1000 miles into Canada, Mexico, Cuba, every single Caribbean nation and both the Atlantic and Pacific.

This amazing technological achievement will allow a 19 year old soldier sent by Trump to help ICE get more children into cages where they can only drink from a toilet to rub himself raw watching people sunbathe nude on the deck of a sailboat off the coast of Bermuda. America is still the most advanced nation in the world when it comes to the things that matter to it.