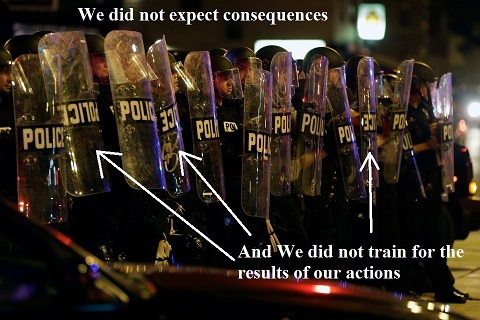 It seemed like “just” another police shooting of a black person. By the incomplete statistics available, #SylvilleSmith in Milwaukee is number 183 this year. At the time of this writing that number has grown to 185 in 229 days or one every 29 hours. The total number of deaths by police violence will go up from 730 before this article is prosted. A 23 year old man's life would have been condensed to a blip on the late news as a local story. This murder was handled in the same way as all the others, with a police story that does not add up and immediate dehumanization of the victim by the press. This story was different, however, because Milwaukee burned.

Police claim that Sylville Smith ran from a car with a stolen plate after being pulled over, drew a gun, and fired on the pursuing officer before being shot to death. The police claim a handgun found at the scene was stolen in March and that the body camera footage, without audio, proved that Smith turned to fire on the officer although no shots could be heard from either weapon. Milwaukee Police Chief Flynn made the final claim directly. The officer who murdered Smith has left Milwaukee on paid leave pending an open ended investigation. News media has claimed that Smith had an “extensive criminal record.”

Chief Flynn can put a happy community policing face on almost anything. He has been smiling and pretending to embrace diversity since the beginning of his career in Jersey City NJ from1973 to 1988. For those unfamiliar with that particular metropolis, the police are brutal and notoriously corrupt, even by the standards of the Garden State. In July of this year one retired captain, one lieutenant and 2 officers were charged with over 100 counts of theft, falsifying records, and a pattern of corruption stretching back decades. They padded their six digit salaries (The retired captain makes $143,000 per year before overtime, benefits, bribes and theft) with false overtime claims for off-duty assignments they never performed.

Edward Flynn comes from a culture of mutual backside covering and falsified time sheets. He testified proudly about his Master's Degree from the John Jay School of Criminal Justice before the President's Commission on 21st Century Policing, which recommended covering American in surveillance friendly body cameras as a way to prevent police brutality. In this case, where the body camera has come into play, Edward Flynn claims to have seen the footage, without audio, from the shooting. This footage has not been released to the public. The only two pieces of evidence in police possession, officer testimony and camera footage, have been disappeared and are only available to the public through the filter of Edward Flynn.

The police department's claims Smith's so-called extensive criminal record fall flat and cast a shadow of deception on all other statements they make in this case. Sylville Smith had a concealed handgun license. Such a license must be granted by the Sheriff's office and are unavailable to persons with “extensive criminal records.” A Statewide check of Sylville Smith's records show that he has a single misdemeanor conviction for carrying a “dangerous weapon” (Wisconsin Code 941.23(2)). He paid $433 in fines and court costs and received no jail time. Had the “dangerous weapon” been a knife or gun he would not have been able to get his license. He was also caught speeding once without his license or insurance being current. That is the extent of his “extensive criminal record.”

In order to get a concealed handgun license in Wisconsin one must complete a training and safety course. Such courses require a person to bring their own gun. Thus Smith had to lawfully own a handgun and pass a background check to get said gun before even applying for the license. He had his own gun. He had no need for the stolen gun police claim they found on him. The whole story falls completely apart right on the face of those facts alone.

Like Henry Green, Philando Castile, and Alton Sterling, Sylville Smith was shot dead for legal firearms ownership in his own neighborhood. The police, as per usual, made the video go away. Smith's neighborhood, where the uprising following his murder was centered, is the only majority black neighborhood in Milwaukee that is not a prison. There are five majority black neighborhoods in Milwaukee. Three are state prisons, one is the county jail and the third one is the economically distressed area where Smith lived and died. Milwaukee is the most segregated city in America.

Milwaukee's only black neighborhood without bars and guard towers has a median income that is only 41% of that in white neighborhoods. There is a recent history of racist violence there. Peaceful protest began in July at the first gas station to burn on the first night of the uprising. Teenagers, apparently unhappy that it was closing early banged on the glass, as teenagers will do in the summertime when separated from ice cream and other sugary treats. The owner, who is not black nor from the neighborhood, chased them down the street firing his gun wildly in the air. He was not arrested for shooting at children who wanted ice cream five minutes after closing.

Milwaukee's segregation mirrors that of the rest of Wisconsin, which is now the heart of the deep North. According to http://www.ygbcoalition.org, 32 of Wisconsin’s 56 majority black neighborhoods are jails or prisons. A further nine are section 8 housing complexes, two are actual housing authority run complexes and two are large homeless shelters. In terms of percentages that's 57% prisons and jails, and 23% government controlled poverty housing. The largest of the remaining nine is in Milwaukee and has had the governor deploy the Nation Guard after an uprising that was a clear response to a shooting, a coverup and years of racism, segregation and enforced poverty.

The canned response from law enforcement was to blame communism. While Joe McCarthy drank himself to death he left a firm ideological groundwork in law enforcement his heirs adhere to while directly commanding the jackboots on the ground. Before Smith's murder and the resulting uprising, Milwaukee County Sheriff David Clarke called Black Lives Matter an urban guerrilla movement in an editorial for The Hill. He linked protest to terrorism in a way that would make old Joe raise a glass of whiskey “We have several forces internal and external attacking our rule of law: ISIS, Black Lives Matter, Occupy Wall Street – just the most recent iterations of the elements who brand themselves as unique but seek the same revolutionary aim: take down the West, the philosophy of equality before the law, and replace it with their authority, their rules, their hate.”

Two years before speaking in support of racist GOP candidate Donald Trump Sheriff Clarke called for an additional 600 sworn officers in Milwaukee, 200 for him and 400 for his anti-communist fellow traveler Edward Flynn. “I'm going to put a lot of people in jail – I like putting people in prison.” Apparently he does, as Wisconsin's prison population is booming to the point where prison organizers have been on hunger strike for 72 days as of this writing. Two have been force fed while in isolation for 65 of those days, a situation only replicated at notorious military prison in Guantanamo Bay.

Milwaukee Police Chief Edward Flynn hopes not to be outdone by his counterpart in spurious red-baiting. He blamed the uprising on the influence of the Revolutionary Communist Party, a small Maoist sect with virtually no toehold in Wisconsin. The click bait friendly website Buzzfeed was quick to pick up Flynn's baseless claims and re-brand the erstwhile followers of Mao “Anarchists” despite getting the party's name correct. Apparently nobody on Buzzfeed's editorial staff has even a passing knowledge of history. Anarchists and Communists have a long history of opposition to one another with the latter often executing the former in vast numbers.

The time line of police statements up until this point, despite Master's Degrees from top Universities, major party speaking engagements, and well placed editorials is completely devoid of truth and as segregated from reality as Milwaukee is from itself. The uprising in Milwaukee was sparked by a police murder and the resultant typical lies. It was fueled be long standing racism and escalating violence. It was situated in the “populist” or “progressive” upper Midwest. But as Malcom X once commented, “The American South ends at the Canadian border.” Wisconsin has no land border with Canada.