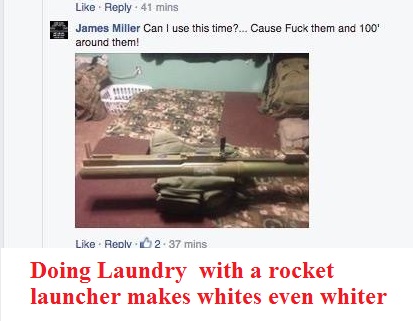 The clique making the threats, including sending pictures of anti-tank rockets kept in their homes, seems to be centered around a Wisconsin National Guard unit, Company B, 1st Battalion 128th Infantry Regiment. The unit is part of the main combat unit of the Wisconsin National Guard, the 32n Brigade Combat Team. One of the pictures sent contains an M-72 Light Anti-Tank Weapon, or LAW, and a laundry basket. There is no legal way for those to things to be in the same room. Either the white supremacist brought the weapon home or he does his laundry at the armory.

The protest is planned for Saturday July 31 at a liquor store owned by the village of St. Anthony employs the officer who murdered Philando Castile. A spokesperson for the IWW-GDC, Richard Hawthorn, said We have a rally and event planned at St. Anthony Municipal Liquor, since it is owned by the city, it directly funds the murderous police department that killed Philando Castile." The village received over $200,000 in proceeds from sales at the store in 2015, enough to pay the salaries and benefits of two officers, according to their own budget report.

Members of the Three Percent Militia had multiple confrontations  a black lives matter protest that had occupied the front of the 4th precinct police station in Minneapolis this past November. Later, other counter protestors who may or may not have been inspired by these confrontations attack the protest and 5 protestors were hospitalized with gunshot wounds. Police refused to allow ambulances to the scene and the protestors own medical staff brought the wounded to the hospital. The IWW-GDC is similarly organized for this event. According to Hawthorn “We are unfraid; we provide our own security and always have, and we expect a massive turnout on Saturday." Subsequent to the attack police belatedly arrested three white supremacists and their reduced charges are slowly meandering through the court system.

The group has researched into those that threatened them "on our Facebook event this event was threatened by a group of people, who post pictures of heavy weaponry intimations that they would attempted to use them. this group seems to have connections through the Wisconsin National Guard, and we have begun substantial research into who these people are.” Hawthorn said.

This reporter attempted to contact the Wisconsin National Guard with questions about the legality of death threats by it's personnel against civilians and the possession of anti-tank weapons in civilian homes. The phone contacts public affairs offices for both the Wisconsin Department of Military Affairs and the 32nd Brigade Combat Team lead to cellular phones with no provision for accepting voice mail. Further investigation showed that the commander's position of both offices are currently vacant.

A series of calls placed to the Judge Advocate Generals Office of the Wisconsin National Guard confirmed that both offices had no assigned personnel. Sergeant Hickman, who answers the phone in that office, was not permitted to answer any questions from the press and transferred my call to Captain Trovino [spelling unclear from phone call], who is the public affairs officer of his officer. The line went dead while I was on hold and the switchboard suddenly went transferred me to a cell phone with no voicemail. Subsequent calls produced the same result.

Although the protest will move forward under duress, there is no way to get comment from the Wisconsin Department of Military Affairs about these publicly made threats. There is also no way to report stolen anti-tank weapons to the actual proper authorities or even get them to open the armory and take inventory. White Supremacist infiltrating the highest levels of law enforcement and homeland security is nothing new, but the apparent theft of heavy weapons and subsequent non-investigation is.

The Mockingbird will continue to cover this story.