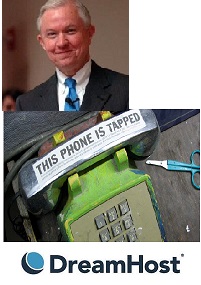 Sessions statements about Charlottesville are could not be a more direct signal to police unions and other white supremacist groups if they had been blown through a dog whistle to Nixon's pet Checkers. When Sessions referred to the events in Charlottesville as an attack on “law and order” he was refering to the dead an injured protestors not the neo-nazis attacking them in full view of the police who had been ordered to stand down. When he said it was a threat to “the heart of American Democracy” he was surely not refering to the right to vote, which he clearly opposes.

Since the police had been ordered to stand down, even while clergy were being attacked right in front of them, the order must have been given from somewhere above. Sessions revealed that the FBI was already working in Charlottesville the same statement. Combine that with DHS Secretary Thomas Bosserts condemnation of violence “on both sides” and you have federal enabling of racist violence by a neo-confederate Attorney General.

Exactly one month to the day before a nazi drove his car into the crowd, Sessions Justice Department served a warrant on California based internet provider Dreamhost. The warrant demanded ALL the data, including names, address, contents of all accounts, length of service, credit card transactions, pictures and everything else from 1.3 million users. This warrant is part of the effort to prosecute people who protested Donald Trumps inauguration. Apparently one of the protests that happened that day had been organized through a website hosted there.

Dreamhost is fighting the Warrant and refusing to turn over it's user data. The reporting on this event in The Hill and other mainstream outlets misses the facts that this proves. If the case was a national security case, Dreamhost would have gotten a gag order with the warrant and not been able to talk about it. If the case involved a single foreign person or even a foreign email address, the warrant could have been garnered and executed via the notoriously pro-prosecution FISA court. This could have happened in secret without Dreamhost even being invited to court to represent itself in it's own defense. Obviously from the nature of the actual state of the legal action neither of these things are what has happened.

The only option left is that The Department of Justice is taking a short detour from dismantling affirmative action to intimidate and prosecute all the users of a whole internet provider because one or more of them simply looked at an anti-Trump website prior to a protest that was brutality suppressed with over 200 defendants facing hundreds of years in prison because a single limousine was destroyed and a single nazi was punched into meme immortality by some masked person. Several of those people were members of the very same labor union that bore the brunt of the impact of the nazi's car this past Saturday.

The internet based civil liberties group Electronic Frontiers Foundation issued a statement on their blog about the warrant and the case. Unlike the ACLU, which lied to provide excuses for nazis to kill people in the streets, EFF has an actual understanding of human rights:

“In just one example of the staggering overbreadth of the search warrant, it would require DreamHost to turn over the IP logs of all visitors to the [disruptj20.org] site. Millions of visitors — activists, reporters, or you (if you clicked on the link) — would have records of their visits turned over to the government. The warrant also sought production of all emails associated with the account and unpublished content, like draft blog posts and photos,”

“No plausible explanation exists for a search warrant of this breadth, other than to cast a digital dragnet as broadly as possible. But the Fourth Amendment was designed to prohibit fishing expeditions like this. Those concerns are especially relevant here, where DOJ is investigating a website that served as a hub for the planning and exercise of First Amendment-protected activities.”

A similar warrant has not been served on the Worthington based Daily Stormer, which organized an attack with tiki torches, clubs and chemical weapons on unarmed students four days ago and followed it up by beating clergy and civil rights leaders the next day in broad daylight while the cops watched. Cornell West himself attempted to get arrested to simply survive. The police would not even do that and his life was saved by anti-fascists who fought back. That gets no warrants just a tepid and belated PR condemnation even after murder by sports car and national outrage.

The have been no warrants served on Brietbart, who sponsors White Supremacist speakers and has the President's ear. There have been no warrants served on anything but a single service provider who hosted one or more anti-Trump websites, in order to further the prosecution of members of the Industrial Workers of the World and others who dared oppose the President. “Law and Order” have always been the watchwords of fascists, been they in the public office, serving in police forces, or simply in the streets.