Under the most compelling circumstances a wiretap on a watch on an arm that was being sawed off a living man's body while he screamed did not cause a single action to be taken to save that journalist's life. Therefore wiretapps on journalists are not for their benefit or to save their lives ever.

The FBI and the Justice Department have rules about wiretapping journalists. As reported by the Freedom of the Press Foundation, there is an application process to wiretap journalists through special courts under the Foreign Service e Act. Until September 17th, these rules were a secret. A reader examining them [They are available for download at the bottom] will see that they are heavily redacted and the last two page are labeled SECRET/NOFORN as opposed to the two directly before them which are labeled “unclassified.” These are secret rules for talking to a secret court.

The secret court that the secret rules are for is called the FISA court. It has it's own sorted history and grants applications almost every time. The existence of the actual rules was known as far back as 2013, when Democratic Attorney General Eric Holder solicited secret input from friendly news organizations and then had some lower level white house staff turned non-profit board members rubber stamp the idea over the next two years. The end result was secret for three more years until now, where a large chunk of it is still secret. The intelligence community has a history of lying to federal judges on wiretapping issues so there is no reason to think that thin guidelines are anything other than window dressing that we can not even actually see.

The FBI, although technically answerable to the Justice Department, has it's own, different and even more secret set of rules. They also have a different proceedure. This is called a national security letter. It gets served on a telecommunications provider. It is a secret document. Thus anyone working for the service provider could go to jail for espionage for revealing contents of even the existance or the letter. If the word secret is at the bottom, and it is revealed, a person could wind up exactly as former FBI Agent Terry Albury did for revealing racist surveillance practices within the FBI. He will be sentenced to 4 or 5 years in prison tomorrow October 18th.

The following document, which regards FBI guidelines known to exist since 2011 and accidentally released in another Freedom of information action request, show all that can be known for sure about the National Security Letter proccess. There is nearly nothing on that page that is not redacted. Somehow it is treated as secret and subject to redactions when it is labeled “U/FOU” which means unclassified for official use only. The document was garnered by the Reporter's Committee for the Free Press and published in 2016 by the Freedom of the Press Foundation. 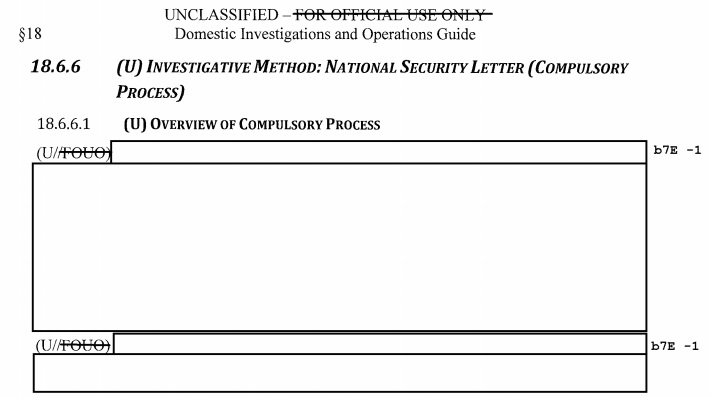 There were more documents published by the Freedom of the Press Foundation, and they can been seen here, but the amount of redactions on them would leave a reader with a page and a half of nearly black screen.

The whole multi-year dance of ever refined FOIA requests, mostly made on the “most transparent adminstration ever”, which Obama claimed to run, could have been avoided if the government had told the truth. They can do this by taking one of the black magic markers they seem to have a great abundance of and having their two year old children scrawl “We do want we want” under their letterhead on bring your child to work day at Bagram Air Base.

The walls are closing in on the rights of the public to know anything truthful. Journalists are being dismembered alive without consequence or even meangingful verbal condemnation. Meanwhile the rules on spying on them, or even how many of them have been or are being spied on, is a secret. Speaking to a reporter gets you thrown in prison. Being a reporter gets you cut into chum on the consulate general's desk while at least two intelligence agencies listen in and the agents wish it was their turn to work in the field and hold the bone saw.