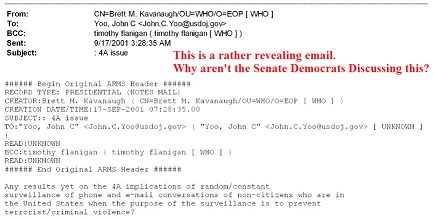 Senate Democrats, powerless against a 51 to 49 margin in with Mike Pence ready to be a plus one, have been leaking what documents they think help them discredit Supreme Court Nominee Brett Kavanaugh. Kavanaugh's views on contraception and abortion are at the forefront of the narrative they feel is most likely to win the uphill partisan fight they are in. Kavanaugh's views on pretty much anything but a sunset are at odds with anyone in America who exclusively uses their hind legs for locomotion, but with a candidate that repulsive a party with no stomach to fight nor real strategy to win can pick from a large selection of hills to die on.

There is reason for the focus and that is that it makes good theater. Political Theater, as opposed to actual opposition, is what we are actually viewing. Cory Booker (D-NJ) threatened to release sequestered documents, got off hand threatened with removal from the Senate, famously replied “Bring It” and then released documents he can not actually be punished for releasing. Other Senators eying the DNC's permission to run for president 2020, including Senator Leahy (D-VT), followed suit.

Blocking Kavanaugh's ascension to being the last word, literally, on the law of the land could be achieved by filibuster or boycott or even shutdown of the government entirely. If something actually is meaningful then empty theatrics would be replaced by actual constitutional crisis. The real object of this particular farce is to triangulate in on Roe V. Wade in an effort, as always, to win over moderate republicans rather than animate their actual base into something that might look like actual resistance. This is why war criminal, torture profiteer and defense contractor Dianne Feinstein (D-CA) apologized from the dais to the nominee for disruption by protestors “Well get through this soon.” This man is only worth apologizing to if his dog died, and not if it choked to death mauling a toddler.

In the middle of the at least 5 counts of perjury this mans answers could have nabbed him over the course of the hearings so far, one leaked email jumps right out. That 2001 email showed then Kavanaugh, then clerk to White House counsel Alberto Gonzales, knew about and collaborated on warrantless wiretapping by the NSA, a now enshrined 17 year institution in America. 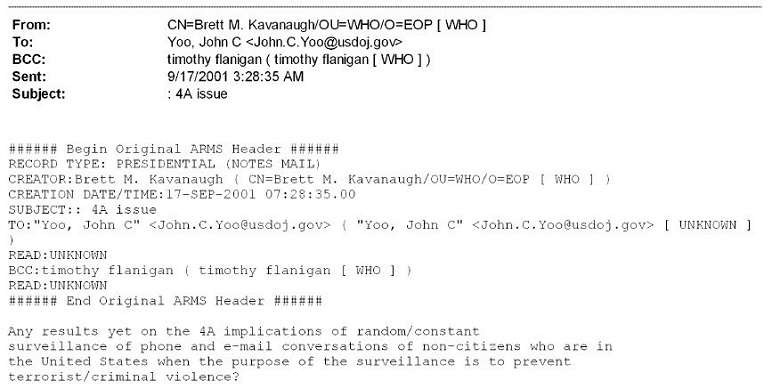 Kavanuagh was brought in to bolster John Yoo's end run around the 4th amendment specifically and said so above in as many words. This was six days after 9-11 before the fires were even out and before the Patriot Act was finished being written in secret. Meanwhile, Dianne Fienstein, while now minority top dog on the judiciary committee, has been sitting on the Senate intelligence committee the whole time, knowing some of the extent of the project, and feigning disbelief along with the rest when lied to by Admiral James Clapper in open session. Clapper, despite lying to Congress and by extension the American people expects those same American people to believe him four and five years later when he mumbles something about Russia and elections.

The Democrats are not positioning themselves to defeat the Republican agenda, any more than White House leakers are the “resistance.” They themselves agree with 90% of it and pretend to oppose 45% of it. On warrantless wiretapping, like many other issues, some of them directly materially benefit from the national security surveillance state.

The act on stage this week at the Capitol Hill theater is designed to be dramatic and emotionally moving to the most moderate edge of the hard right. It is a vain hope to get three Republican Senators to switch sides. It fits neatly behind last weeks act, which was reconciliation around values over the soon to be rotting corpse of war-criminal John McCain and it goes stunningly with the background soundtrack of self-serving inside leakers playing a misleading tune about themselves being an anonymous lodestar of resistance.

It will end, as always, with fake tears and a victory for the right. Courting the left wing of the Republican Party since Nixon has only served to empower it's right wing and drift the whole body politic endlessly to the right. It moves at a predictable three percent rate per election cycle. But is has been twenty three election cycles since Watergate and thus a nearly 70% move since then. So long as theater is a first act of phrase building, followed by second act of soundbite driven faux-partisanship followed by a third act of reconciliation and reaching across the aisle the ship of state will remain on it's steady circular course about the waters of the swamp.