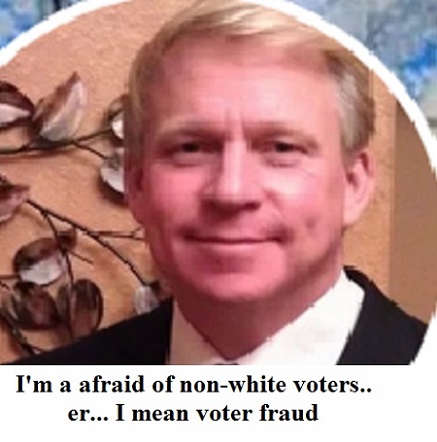 While the Democrats are busy not defending their constituents being stricken from the voting roles using openly racist methods, the GOP is using similar methods to shave voters by enough of a margin to unseat a Democratic Senator in North Dakota. Because of North Dakota's unique voting laws and demographics, the tactic is age old. Here they will suppress the Native vote.

North Dakota does not require voter registration. One simply shows up, shows ID that puts them in that precinct and then votes. This simple method was effective until now. New rules, disallowing voters from voting with a tribal ID that shows only a post office box and no street address. This is an absolute bar to the States large and growing native population as people living on reservations have no street address and their mail is delivered to a post office box at the nearest station.

As in Georgia, this is racially targeted voter suppression, and it is part of an amplified national trend. North Dakota is rural and distances are great. It is an undue burden to drive or be driven to vote and then be denied by a last minute rule change.

Jim Silrum, the North Dakota Deputy Secretary of State imposed the rule on October 1st, specifically informing tribal leaders in an effort to get people to stay home. He said that it was done in response to “concerned citizens” worried about “voter fraud.” The logistical barriers to driving a long way, voting once with proper ID and then driving twice as far in the other direction to vote again are obvious. The only other option for “voter fraud” is for a non-citizen to travel to North Dakota, in October, get a post office box, get an official document mailed to it, use that to get identification and then drive around rural areas voting as many times as possible and then leave the state. It seems that Silrum's manufactured “concerned citizens” are concerned that they are a minority and do not have exclusive access to the voting both in majority Native counties. There is a word for that concern and it starts with an “R”.

The now republican stacked Supreme Court backed the racist rule 6-2, with rapist Supreme Court Justice Brett Kavanaugh, who Heitkamp voted against, recusing himself because of the case directly affecting her and her recent opposition to allowing a gang-rapist fraternity brother to be one of the final arbiters of American so-called law and justice.

North Dakota is 10% native and about a third of those residents live on reservations. That demographic has been growing in recent decades as more people leave distant cities return to their families. This disenfranchised sector is exactly the right size to flip the election and steal the Senate seat won by aisle crossing Democrat Heidi Heitkamp in 2012 by only 3000 votes.

The 3000 votes that carried Heitkamp to victory are part of the same roughly 18000 votes that will not be allowed allowed. The only blue areas on the map of the 2016 election results are the counties that are predominantly Native American and encompassed by reservations.

Tribal officials are coming together to provide laptops at polling places with maps and software that can print new Tribal Id showing named roads and numbered homes.

O.J. Semans, chief executive of Four Directions, a national Native American voting rights group, was quoted by the Washington Post when he said the strategy was "legally watertight" and necessary to counter the "devastating" court ruling. "Even if it doesn't change the overall result, it's about fighting back," Semans said. "We have to fight back."

Republicans also intend to fight back. Al Jaeger, North Dakota's secretary of state, did not respond to a request for comment by news media but did remind the Four Directions group that tribes delegating authority to erect road signs and assign addresses had been curtailed by a court decision against the Chippewa nation.

Thus we can expect to see people going to the polls, being denied because they live quietly on the reservation, being given corrected Id and then that Id being denied all the way to the Supreme Court. This will happen because high ranking government officials are reacting positively to the “concerns” of a manufactured minority group bent on keeping the majority from voting at all. All in all, a national majority in both houses of Congress is being struggled over and only one side is playing to win.