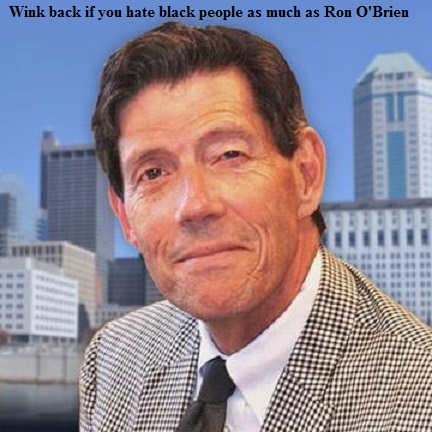 After the Tate's murder his family filed a wrongful death suit against the City, noting that the police “found” neither a gun nor the stolen property they were looking for until after they searched Tate's home. The family's lawyers claimed they had a witness that contradicted the police narrative, as is always the case when the police do not have a camera ready to record evidence of a crime, which is what the job of police investigation entails. The very next day Masonique Saunders was in jail, facing 65 years for murder and being tried as an adult.

The obvious outrage has lead to protests. At the most recent one of these, four non-violent people staged a sit in and lockdown in the middle of High Street during gallery hop. They were given excessive charges including riot by the other racist prosecutor who likes to target children, Zach Klein.

Ron O'Brien, unlike Klein, is a Republican and needs to appear to be tougher on crime (“crime” means black people if you are Republican or a Centrist Democrat) to appeal to suburban cops and other professionals who return him to office in every gerrymandered election. So he did one better today.

On the day of the court hearing, Ron O'Brien suddenly found more new charges for Masonique Saunders. Apparently he and the police “discovered” that a 16 year old girl was the criminal mastermind behind the robberies being investigated. She sent her boyfriend out with out a gun to sell property he did not have in the exact place that someone had been shot for the same thing the night before. Alone and facing 65 years, along with the police shutting down her legal fundraising through complaints and attacking her supporters fundraising, she took the plea bargain she was given for three years juvenile as opposed to getting out of prison sometime after it will be safe to drink from a well near Chernobyl.

The prosecutions threats defy actual logic. If Saunders was somehow involved in this alleged pattern of robbery, why was she not charged with this at the scene that very night? Why was she not charged at the time her arrest approximately one week later? Why did all this new information come to light 5 days after people started willfully going to jail over the issue on the exact day of her hearing? Why did this happen right after the SWAT triggerman, Eric Richards, was named officer of the year essentially in response to the public outcry about the railroading of Saunders?

Any well paid lawyer would make a billion holes in O'Brien's so-called case or now cases. Saunder's lawyer was not being paid because the police interfered with community fundraising for both her defense and that of her supporters.

In the last two weeks, on top of the four arrests, the award for Richards and the new bogus charges, the Columbus Police have launched a new PR campaign. They are asking local residents to get blue light bulbs for the porches to show support for the police. This is an obvious ploy to boost and animate their support in the lily white suburbs. The message is plain in black and white. If you are black, and you speak out, the police and the prosecutors will go after you and your family and all your friends. If you are white, the police and the prosecutors are here for you, and if you see a teenager, they will promptly serve your loyal phone call with an unmarked car to shoot the child in the back.