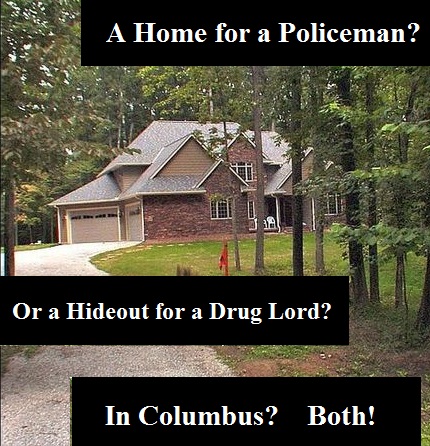 The FBI has the vast resources of the federal government and tremendous power. Their recent investigation into the activities of the Columbus police Vice Squad seems to be deliberately focused on a single arrest, that of former Presidential Mistress and Adult Entertainer Stormy Daniels, and the attendant political ramifications and fallout. They are explicitly not investigating the deaths of Donna Dalton-Castlebury or Bobbie Renee Simpson nor the obvious connections to the Vice Squad. It seems that they know they would find Andrew Mitchell, who murdered Donna Dalton-Castlebury on August 23rd leads a triple life as a policeman, wealthy landlord, and drug kingpin. What the FBI does not wish to find, the Mockingbird has found.

Recent mainstream press reporting hinted that Mitchell had substantial real-estate investments on the East Side of Columbus and that at least one of these properties had a substantial number of reported drug and other crimes happening on the premisses. The reality is that Andrew Mitchell is more than a millionaire with substantial real estate holdings.

In addition to his actual residence, a half million dollar home on a wooded lot in Sunbury, Mitchell owns five houses and two apartment complexes on the South and West Sides. The total value of the properties is in excess of $1.2 million. He purchased all of these in a four year span between 2003 and 2007, before the sub-prime mortgage crisis put rampant real estate speculation on pause. During that time, Mitchell owned a slightly more modest home on Society Hill but did his real-estate business from a rented condominium on Hollybrier drive. At a bare minimum, this all represents an incredibly fortunate set of investments made on a policeman's salary. One wonders how well all those units could be managed by someone who would need to work massive amounts of overtime to afford them in the first place.

According to sources who explicitly fear for their lives, both apartment buildings are known drug establishments that also allow prostitutes to stay in the apartments in return for providing Mitchell and his accomplices with sex. According to sources, it is not uncommon for Mitchell's goons to barge into an apartment and stash a package. They warn the occupant to not look at or touch the package and return for it later.

Both complexes have people engaged in active and aggressive counter-surveillance that can and will escalate to the level of attempted car-jackings. The Mockingbird has not received any information from sources on successful car-jackings, which does not bode well. Some of these inquisitive neighborhood gentlemen are reported to have day time jobs with the Columbus Police as well. Mitchell is not acting alone.

Although he has no real properties known to generate illicit income there, Mitchell's above ground job as a Vice Detective places him on the Westside where he is a known abusive cop. Our investigation stalled here for some time as victims were afraid to come forward on or off the record. However Donna Dalton-Castlebury's family has been talking with her friends and were willing to speak with another press outlet.

According to an interview given by Dalton-castlebury's sister Bobbie McCalla “We know she knew Mitchell before the murder and that Donna had assisted mitchel in robbing westside dealers from their homes. Her street sisters are very suspicious of Mitchell and his fellow vice officers.” McCalla spoke to the Columbus Free Press for a story which will appear in their current November issue.

Mitchell has the perfect racket. He uses sex workers to gain entry to drug houses. He and his fellow gang members, some of them also cops, then steal the drugs and money. The drugs are then taken from the Westside to the Eastside where they are sold from buildings that Mitchell owns under protection from the same group.

No other criminal group dares challenge this or retaliate because that would entail a direct physical attack on police by criminals. Non-police officers involved in the racket, must accept what payment Mitchell chooses to give, or be killed, as Donna Dalton-Castlebury was.

This echos statements made by Mohamed Abdigafar Abdullahi, who was arrested in connection with the burned body of Bobbie Renee Simpson, who was found in a park in Upper Arlington. Simpson was known to have worked in the same Westside neighborhood as Dalton-Castlebury. Police claim her body was in a “container” which also allegedly had Abdullahi's DNA, when it was found on fire in a bush. Abdullahi has been charged with arson, for the burning bush, and abuse of a corpse, for the burned body.

Abdullahi was stopped by police for OVI last week and then charged. He later gave the statement that he was “working with the Vice Squad and the FBI.” He has not been charged with murder, because Simpson’s life does not matter to law enforcement if she is no longer a source of income.

The people used by Mitchell and his gang of Vice Cops turned bandits live on the margins of society. They are forced to “rent” from Mitchell because of their criminal and / or credit history. No one will take their word against the word of a police officer and in the Franklin County has not convicted a policeman for murder in over 20 years. Prosecutor Ron O'Brien will not even meet with deceased victims families. This, and other criminal enterprises of the Columbus Police, are not even looked at so long as the primary victims remain outside the glittering tax free shadow that opposes the sun around the intersection of High Street and Nationwide.

Far from being a force that can police it's own, the Columbus Police, along with Deleware County Sheriff's deputies have been providing Andrew Mitchell with extra protection at his home during times when they suspect there might be a protest. He is also guarded by detectives during his excursions to Columbus despite the fact that he is on paid leave. This is Ohio justice, paid leave for shooting his conscripted employee in order to not pay so that he can concentrate on his drug and real estate empires.