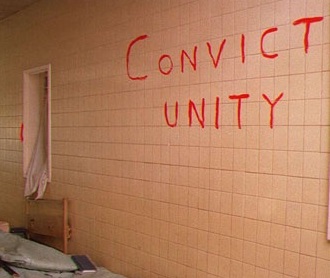 On August 26th hundreds of activists from Columbus and around the country will gather at the Barak Recreation Center to set the ground work for supporting a national prison work stoppage both in Ohio and in their local communities. Over 100 conference attendees have registered for the three day event from out of town alone. Local organizers from the Red Bird Books and other groups formed an adhoc committee to put together the event which is called Bend the Bars.

The conference schedule is features call in interviews and workshops from actual prisoners organizing for material improvements in conditions both in the Ohio prison system and around the country. The attendees plan to spend most of the time in small group sessions building the skills needed to support human rights organizing by prisoners still on the inside.

The conference organizers are all sponsoring a demonstration downtown on August 27th where they intend to March from the Statehouse to the headquarters of the Ohio Department of Corrections on West Broad. They have not specified what route they will take.

The March will be in support of a group called the Free Ohio Movement which is a collective of prisoners and their families and supporters who are “who are concerned about the judicial and prison system in the state.” They state that they “acknowledge the need to work together on a comprehensive level, so the Human Rights of our Confined Citizens are protected.” and are “using the laws that require all Human Rights are recognized.”

The Free Ohio Movement is joined by other groups calling for a national prison labor stoppage on September 9th, on the 45th anniversary of the Attica prison rebellion which saw 33 inmates killed for protesting abuse, most shot in the back on the orders of then Governor Nelson Rockefeller after surrendering. Autopsies and post incident investigations proved that all ten guard killed in retaking the prison were victims of friendly fire.

The national call for a prison work stoppage was initiated by the Free Alabama Movement under the slogan “Let the crops rot in the fields.” On quarter of the entire state budget of Alabama is comprised of direct profits from prison labor. An estimated 1,000 prisoners from a single county in Alabama were wrongfully convicted on planted evidence.

The strike is supported by a national labor union, the Industrial Workers of the World. That union, founded in 1905, has formed a national committee to support the organizing and demands of prisoners working for private profit in public prisons. The committee, called the Incarcerated Workers Committee, or IWOC, has over 1,000 members in prisons around the country as well as outside support groups and a handful of traveling organizers.

The focus of the coming strike is not limited to private prisons, an industry that generates over $3 billion a year in profits, but also companies that exploit prison labor. On member of the Free Alabama Movement spoke directly to a reporter saying “Our mass incarceration is a form of slavery, because we’re not being paid for our work, but we’re being charged outrageous fines,” Required fees include $4 for armbands, $4 for identification cards, and $31.50 for a urinalysis test. Prisoners are charged $200 to petition a court. The maximum pay rate in Alabama prisons is $0.30 per hour.

In Central Ohio, several local companies profit directly from state subsidized prison labor under slave conditions. Dublin based Wendy's has 100% of their work uniforms made by prison labor. Despite their pledge not to, Victoria's secret, owned by Ohio's only billionaire Les Wexler, uses prison labor to make lingerie. The company claims it only uses “voluntary paid” labor, which in America means prison labor everywhere but Texas.

Downtown Columbus has a huge 10 acre facility for Abbot Laboratories. Abbot receives a generous 10% reduction on it's property taxes while employing prisoners to make infant formula, diabietes testing strips and other consumable products which it sells world wide. Abbot also is the only company in the world that makes all three drugs used in the lethal injection process.

The Bend the Bars convergence is an event that local activists hope to use to connect groups around the Midwest to support the prison strike and other actions. In interviews the group members said that they planned solidarity demonstrations on September 9th but did not specify locations. They also intend to support prisoners organizing on the inside as events unfold. The Mockingbird will continue to cover this story both locally and nationally.