Police Records on misconduct, false testimony, beatings and shootings are secrets from coast to coast 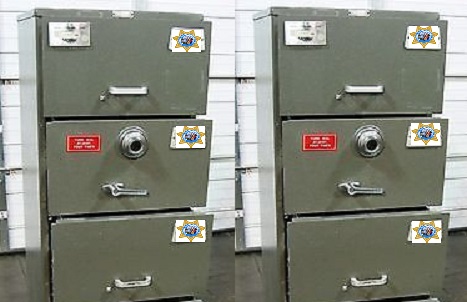 The often used adage that police can lie whenever they want and get away with it is in a sense legally true. This stems from the legal concealment of truth, the literal blinding of justice and strident defense of the laws that make this possible. There are politicians on both sides of the shrinking aisle that seek every chance to extend rather than curtail the secrecy. It is not vampiric America that simply does not appear in mirrors, but Medusa America that would certainly petrify if confronted with it's own horrific gaze.

The Los Angeles Times devoted two stories totaling nearly 5000 words total to the topics of police complaint records, secrecy, false testimony and the laws that keep them secret. Seven total reporters are credited between the two. At one point it was noted that New York and Delaware have special protection for police disciplinary records alongside California. This writer has done previous work on new and special laws that shroud police shootings in secrecy in Virginia. Locally, the Columbus Police have a tactic that makes both complaints a secret and keeps them from ever being sustained. This is all done by carefully using loopholes that are purpose built.

For California the records must be preserved, but they are so secret that even a prosecutor may not see a record of misconduct of an officer if they are a witness in a trial that particular prosecutor is prosecuting. This has allowed career perjurers to make six digit figures sending people to jail on planted evidence and verbal questioning from officers with a long history of brutality. The LA Times articles focused on the few cases where this coming to light permitted violent criminals to beat the odds and go free for a while. Not many tears were shed nor ink spent on the hundreds of times that the innocent have been imprisoned for decades for each person that offended at a later time despite being exonerated.

Multiple legislative efforts make officer disciplinary records accessible to someone without need to know clearance have uniformly died in committee in California for more than a decade. The committee where such efforts die is the Fiscal Committee. The current head of that committee is Lorena Gonzalez Fletcher (D-San Diego). She is a Stanford lawyer and former AFL-CIO bureaucrat. She admitted to the LA Times that “the conversation has changed” although she remains the major gatekeeper

Gonzalez-Fletcher's new husband, Nathan Fletcher, sat on the fiscal committee from 2008 until 2012, where he stonewalled similar attempts to open the records. Fletcher was also one of two California house minority whips and became a Democrat during his second term in an acrobatic inverted Lieberman maneuver to the other side of the center aisle. Despite being re-branded a “progressive” he is still in his words a proud member of the Koch brother sponsored American Legislative Exchange Council (ALEC) which pushes model conservative legislation across multiple states. He was also a member of the Democratic National Committee in 2016, helping to support Hillary Clinton's failed run for president.

During his tenure in the Assembly, which was prior to his resignation to seek the Mayor's chair in San Diego, he accepted huge amounts of campaign cash from CoreCivic, the largest private prison operator in the country. Thus police lie on the stand, defendants go to private prisons, private prisons get money from the government, the private prisons give money to the politicians, and the politicians protect the police officers from prosecution and ensure their often six digit paychecks.

The narrative of the LA Times articles centered around the police unions being too powerful for politicians to oppose on legislation. A snapshot into Sacramento shows that it is a cozy relationship between the politicians, the police unions, corporations and national legislative agenda setters that keep the lies flowing, bullets flying, truncheons swing, cell doors slamming and cash registers ringing.

Refocus the lens to another state and the snapshot remains nearly the same. In January of 2016, the Virginia Senate passed a bill to make all information that would identify police immune to public records disclosure. Thus any time a policeman lied, got caught, and there was some proceeding about it and regardless of the infraction or outcome, it is a secret. Literally the bill, like California's system, makes perjury legally and literally a protected state secret. A court could know, but nobody else is legally allowed to know. Thus nobody is able to tell any court and courts only know testimony.

The Virginia Architects of this law are State Senators John Cosgrove and Bill DeSteph. Cosgrove is a member of the Fraternal Order of Police. DeSteph owned a security consulting company until it got bought out by an even larger military contractor. Both are Republicans. Both are former Naval Intelligence Officers. That is not a secret. That was campaign advertising for both. Both, like Nathan Fletcher, are members of ALEC.

In addition to this model legislation because being an ALEC priority, it is also a priority for private prison corporations. This was the pattern in California, and with both the GeoGroup and CoreCivic donating large lumps of cash to ALEC, it is clearly a national priority for both the center-right Democrat party and the right to far-right Republican party.

Seven reporters did two articles that would total the word count of a major magazine. They did enough leg work and legal case review to cover more than two decades of history. Somehow their editors do not seem to have challenged them to do basic background on well-known state level politicians they quoted. Where are they now background was done on the victims of California's legally enshrined secrecy about brutality and perjury. What little background that could be gotten was on the worst of the loudest officers. Police Unions were portrayed not as corrupt, but as powerful, organized and self- interested.

New York dug up an old law in 2016 also to defeat public records based attempts by the media and public to access them at the same time that Virginia was pushing it's new model through the process.

Here in Columbus, were the FOP has succeed in getting Zachary Rosen after he shot an unarmed man in one incident and was videotaped stomping on handcuffed man's head in a second incident less than a week after being off leave for the first, the police use a different method of secrecy.

This method is called the “ongoing investigation” method and it works as follows. A citizen makes a complaint against and officer. The incident they do, there is an investigation. That investigation might consist of a complaint being filed and nothing else. Ongoing investigations are immune from public records requests. Regardless of what happens, records need only be retained for seven years. Seven years after the “investigation” begins, it ends with nothing happening. Seven minutes and one second later the records are destroyed.

California and New York are using the 1970s post Watergate method. Columbus is using the 1940s method. Virginia has an updated method and there is bi-partisan continuity of support an each update was designed to plug hole the public could see though in the previous method. Police Misconduct has always been a state secret and there is money in and consensus on keeping it that way.