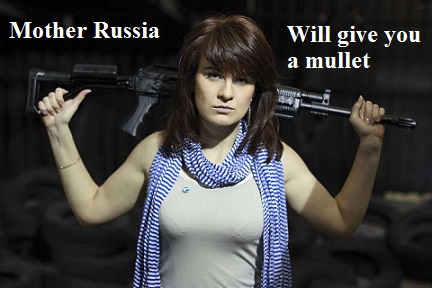 The prosecution has since officially withdrawn this innuendo, claiming they had misinterpreted her text messages. She does still stand accused of taking yet unnamed Republican operatives to Styx concerts. Considering these Styx concerts occurred after the band finally allowed Dennis “Mr. Roboto” DeYoung to Sail Away this crime might be punishable by an ear exam as opposed to a brutal flogging with any book by Lester Bangs. The connection to right wing politics, with Styx front man Tommy Shaw getting play out at various county fairs with Damn Yankees, a wishes it was a super group he formed with Ted Nugent, is a possible reason for bringing NRA members to a show.

Butina's charges stem from two elements. The first element is that she failed to register. Anything else that she is accused of is simply not illegal if she had filled out a form. The second element is that she was financed and acting on behalf of Alexandr Torshin, Deputy Chairman of the Russian Central Bank. She is accused of working for Torshin privately, not the bank directly.

Torshin has been accused of connections to organized crime and money laundering by authorities in Spain. The exact accusations are that he gave advice on money laundering to at least one Russian organized crime group. He is also accused of benefiting from the management of some of the gang's real estate assets. He is a former legislator, yet has no more connection to the Russian Government than Alan Greenspan has to the government of the United States.

The plot Butina is accused of furthering is that Torshin was a conduit for Russian government funds to the National Rifle Association who would in turn use the money to support Trump. Had JP Morgan done this, it would have been legal under Citizens United. A growing majority of Americans think that Citizens United was a bad supreme court decision, but corporations do have free speech, which is the same right that allows Dennis DeYoung to croon out of every mullet rock oldies station in America.

This whole angle of the Russia investigation is as much of a joke as the resurrected careers of the right wing has beens of all the components of Damn Yankees rocking away between the bouncy castle and the dunking booth on the fairgrounds. If it is true that the NRA received money to help Trump, there are still questions.

The first is did that money actually convince a single person who would have otherwise voted for Clinton, Johnson or Stein to vote for Trump? The various Russia investigations seem to only focus on the former heiress presumptive and her assert right to the automatic voting loyalty of the general public. The NRA does not convince liberal voters to vote otherwise no matter what they do.

The actual Trump campaign existed as a bribe funnel. The mechanism was that Trump financed his campaign in part via loans from himself. This was known and hampered his fund raising during the actual campaign. Here we have a single Russian oligarch who may have gotten in on the money laundering train, but the Democrats were counting the cars the whole time. Leak emails published by this publication in 2016 showed the DNC to be in possession of Trump campaign finance documents. This could have been leaked or even Trumpeted and made a Clinton Victory into a landslide.

The second question is why wait until 2018 to arrest a thirty year old Russian woman, make and then withdraw salacious claims, and hold her without bail for the crimes of not filling out paperwork and taking beltway insiders to see fourth rate bands. The answer to that is it makes the narrative about sex and implies spying when what it was was garden variety American pay for access business as always in Washington.

The prosecution has tried to recoup their image by repeatedly shifting to the fact that the Russian government has sent high level officials to visit her in jail and inquire repeatedly about her well being. This is the new media proof. This is also the job of consular officials. Butina is wealthy. When wealthy Americans get arrested on serious charges anywhere the local American consul has an interest and does check up. This is a normal assertion by any nation of their sovereignty. The only nation that does not do this is Australia and then only for Julian Assange.

Butina should still face charges relating to her deep fronts to culture. The former Soviet Union waged a long campaign against the decadence of American pop culture. They considered it a capitalist plot to undermine the values of their society. Putin's goons need to take a long look at the damage this woman could have inflicted on both societies through the promulgation of the music of Styx.